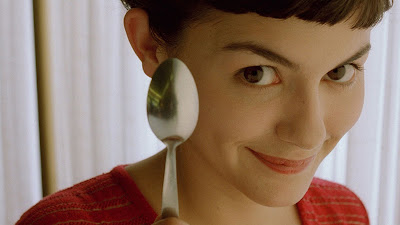 Is it possible to love a character in a film? Or to at least love the idea of a character? I ask, and it’s a question anyone who has ever seen Le Fabuleux Destin d’Amelie Poulain would understand immediately, and would know immediately that I’m asking about the title character.

This film is unlike anything I’ve seen before, a creation of joy, heart, and magic unlike anything else that’s out there. It’s French, making it mildly exotic but not out of reach, deals frankly and entertainingly with sex, but also, to use the French term, has such an unmistakable joie de vivre that it is impossible not to smile and not to enjoy it.

Amelie Poulain (Audrey Tautou) is a young girl born in Paris in the early 1970s. Her father is a doctor, and is cold and distant. While little Amelie only wants a hug from her daddy, he refuses physical contact except for once a month when he gives her an examination. This physical contact excites her so much that her heart races, convincing her father that she has a heart condition. Amelie’s mother is a neurotic and is killed one day while walking out of Notre Dame cathedral when a suicide falls on her from the church roof.

Amelie eventually moves away from home and gets a job in a little café called The Two Windmills. Rather than running after romantic attachments, she is solitary, and takes pleasure in the simple things in life, like cracking the surface of a crème brulee with a teaspoon and skipping flat stones. Her neighbors and coworkers are arguably as neurotic as her mother was. The woman at the tobacco counter, for instance, is a hypochondriac; her boss is an ex horse rider in a circus; another coworker is haunted by her ex, who sits in the café and mutters into a tape recorder every time he believes another man shows interest in her; a man in her building has exceedingly brittle bones, and paints a copy of the same Renoir painting every year.

On the day Princess Diana is killed, Amelie drops the top to a bottle in her bathroom. It dislodges a tile in the wall, and when she pulls the tile away, she discovers a small box filled with little toys, a hidden treasure trove of a young boy who lived in the apartment years before. Amelie decides to track him down and return the box to him, determining that if he is touched by the gesture, she’ll devote herself to making other people happy.

The man, of course, has mixed feelings, discovering his childhood again, but reveals that he has lost contact with his daughter, who recently had a son. Rediscovering his treasures makes him realize what his life is missing, and he determines to reconnect with his family.

From this, Amelie determines to do what she can to make the lives of other people better. She fixes up the ex-boyfriend with the hypochondriac, for instance. She steals her father’s garden gnome and has her flight attendant friend take pictures of it in front of places around the world (a classic urban legend…and possibly where Travelocity got their “Roaming Gnome” idea). When she sees a young man attempt to return a missing bag to a traveler and loses a photo album in the process, she becomes enamored of the young man, in part because the album is filled with photos taken from Photomat booths and discarded by others.

Not everything Amelie does is nice. Her local grocer is a jerk, particularly to the young man who works for him. Amelie makes a key of the man’s apartment, breaks in periodically, and does things like switch his footcream for his toothpaste, and replace his light bulbs with dimmer versions.

Ultimately, the question that Amelie the character and Amelie the film ask is whether or not fulfilling the lives of other people is enough? Does she have the ability, or even the right, to make herself happy in the same way that she enriches the lives of other people? The old brittle painter compares her with a woman in his picture who looks like she is not really a part of the group—there, but not really there.

Throughout the film, it becomes evident that Amelie lives in her own dream world, a place where what she does is only for the good and where she cannot be hurt. She sometimes faces the camera and makes comments, all of which are odd and yet strangely beautiful. At the movies, for instance, she says she likes to turn around and see the faces of the people behind her watching the screen. It is a moment of beauty in a film filled with them. One of my favorite parts of the film is the fact that we are introduced to many of the characters by being told what they particularly like and dislike. The man Amelie tracks down to return the box to, for instance, makes a chicken once a week, and loves nothin more than pulling apart the carcass with his fingers and eating the hot chicken off the bone.

Le Fabuleux Destin d'Amelie Poulain is a special film, arguably the best new-to-me film I’ve seen in more than a year. It is utterly charming, endearing, and fun, filled with sweetness and joy. It’s good enough that I’m rethinking my favorite five films of all time, and it’s damn near perfect.

Why to watch Le Fabuleux Destin d'Amelie Poulain: It’s magical.
Why not to watch: You no longer have a pulse.
Posted by SJHoneywell at 7:58 PM