Reality and Unreality in the Frozen North

Film: Nanook of the North
Format: DVD from Moline Public Library through interlibrary loan on laptop. 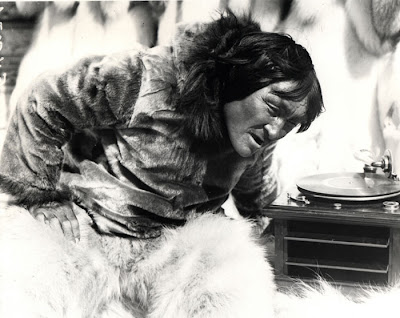 Any documentary filmmaker, amateur or professional, will deal with certain questions and concerns about his or her film. Predominant of these questions is how closely the film tracks with reality. It’s a question still being asked of documentarians today, just as it was asked about the very first people who tried to depict real life on a big screen. Certainly this is the case with Robert Flaherty, the man behind what is considered in many ways to be the first ever documentary, Nanook of the North.

Flaherty had been sent into the Canadian northlands to scout for the possibility of rail lines and for minerals. Through these trips, he came into contact with many of the native people who lived in this region of the Canadian wilderness, the Inuit, more commonly referred to as Eskimo. Realizing that the way of live for these people was changing and changing rapidly—and that he was a major part of the reason for that change, Flaherty took it upon himself to document the lifestyle of these people.

When Flaherty started, there were no conventions for how to properly create a documentary, thus he did what he thought was right. He was, and in fact still is in many cases, criticized for the more romantic elements of his film that have little to do with the reality of the lives of his subjects. While the film tells the story of Nanook, an Inuit hunter, and his family, the reality is that his “family” as depicted on the screen are not really his. Nyla, his wife, is merely another Inuit who looked good on camera.

Other changes brought in by Flaherty include such aspects as the way Nanook and others dress and hunt. By the time Flaherty worked in the sub-Arctic, guns had become a much more common way of hunting than harpooning; building materials more traditional for the southern climates were used in place of snow and ice igloos. Even Western clothing had made inroads into the north, and the costumes worn by Nanook and his “family” were more idealized views of a primitive time. For these changes, Flaherty can be forgiven—his goal was to document a lifestyle before it disappeared completely, and to do so, he needed to Inuit to act, look, and dress in more traditional ways.

As this is a documentary, there is no actual plot. Instead, the film attempts to show the day-to-day struggle of the people who live in one of the most unforgiving and terrible environments on the planet. Nanook, as the man the film is named for, is obviously the main focus of virtually every inch of film. The film, with at least some level of accuracy, shows what he must go through simply to survive, from hunting walrus and spearing salmon to building a traditional igloo out of the raw materials on the ground.

Nanook of the North is, admittedly, far less than it would be if such an ethnography were to be created with modern standards by modern filmmakers. But working from essentially nothing, with no one to guide his hand or his direction, Robert Flaherty created an entire style and genre of film that continues to be used, developed, and built upon today. Flaherty created a new way to look at the world around us, and a new way to view the reality of our world.

Is Nanook of the North worth your time? That’s a valid question. It may be that you have absolutely no interest in the way other people live or lived, in which case you will find nothing here to engage you. On the other hand, what are movies but the depictions of the lives of others? The influence of this film is still being felt, and will continue to be for as long as a filmmaker decides to show reality rather than a piece of fiction.

Why to watch Nanook of the North: It’s where documentaries came from.
Why not to watch: You don’t care.
Posted by SJHoneywell at 2:15 PM

Email ThisBlogThis!Share to TwitterShare to FacebookShare to Pinterest
Labels: documentary, Nanook of the North, Robert Flaherty