It's All in Your Head, Man! 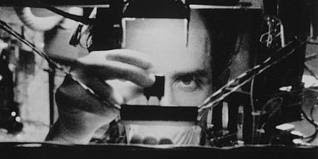 There was a time in my life when I was more than good at math. In high school, I studied calculus, and started college as an engineering student. Then I got to multiple variable calculus—pure theoretical math—and it was time for me to switch to something else. If I could wish for anything, it’s that I understood math better than I do.

Darren Aronofsky’s Pi starts with the assumption that math is the center of the universe in all respects, that math can explain anything and that everything in nature is a mathematical construct. We follow the person of Max Cohen, a mathematician searching for something that everyone would love to find: predictable patterns in the stock market. The theory Max works under is that because math is the language of nature, nature itself is a pattern. There must be a pattern in everything, including something as complex and complicated and chaotic as the New York Stock Exchange.

Max is vastly troubled, however. The moment his is introduced to us, we discover that as a narrator, he is extremely unreliable. He frequently takes large amounts of medication, both in pill form and by injection, and appears to have frequent hallucinations. People appear and disappear on the subway, visions come to him at random, and there is virtually no end to his paranoia. A man with a bleeding hand appears in subway terminals, and at one point, Max finds a pulsing human brain on the subway stairs.

Max’s paranoia is evidenced by the extreme number of locks on his door. The locks are there to protect Euclid, his computer, which Max uses to make stock market predictions. Max is also disturbed by a woman named Marcy Dawson from a brokerage who wants answers from him as well as a Hassidic Jew who is searching for numerical truth in the Torah.

While making predictions, Euclid blows a gasket and spits out what Max believes to be a series of random meaningless numbers. He discards the printout only to later discover several important facts. First, his mentor Sol encountered a string of random numbers during his own research with pi, a string of about 216 digits, roughly the same length as the random number string Max got from Euclid. Second, he learns that the Kabala students are looking for a string of 216 digits in the Torah, because this number string represents the true name of God.

As Max continues to push for the 216-digit number his world falls more and more apart and he descends further and further into madness. The answers he wants appear to be everywhere, taunting him, and yet just barely out of his grasp, a fact that drives him on while it pushes him further into insanity, evidenced by the slow progression of the number of pills Max takes at regular intervals.

Frankly, I’m not sure what to make of Pi, although I’m fascinated by it. Much like mathematics itself, I find the film compelling, and yet beyond my grasp at the same time. The black and white cinematography adds a great deal to the film—this film would not be nearly as effective or disturbing in color. The fantastic soundtrack adds to the head trip as well as is the strange camera work. In essence, for me, Pi is what the secret of the 216-digit number is for Max; it’s just out of reach and I can’t turn away from it. 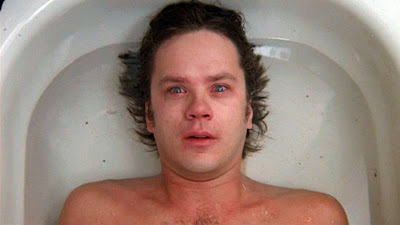 As with Pi, much of Jacob’s Ladder takes place in the protagonist’s head. Jacob Singer (Tim Robbins) is a Vietnam veteran whose platoon suffered near total casualties due to a disturbing attack. Singer, back home now, is having a strange series of flashbacks to the night in question. He also has flashbacks to his first marriage and his son Gabriel (an uncredited Macaulay Culkin), who was killed in a traffic accident. More disturbing is the fact that he’s seeing distorted and horrifying creatures virtually everywhere, things that look like demons. Many of them move in disturbing fashions, doing that rapid headshaking thing which prevents one from focusing on the object in question. Despite his Ph.D., Singer now works in the post office with his current lover, Jezebel (Elizabeth Pena).

Singer’s flashbacks intrude on his waking life, and it becomes impossible to tell what is the dream and what is reality. The only solace he has is from his chiropractor (Danny Aiello), who frequently repairs Singer’s back and gives him advice to hold onto. Singer flashes between his life with Jezzie, his former family, Vietnam, and a nightmare world of demons until it becomes impossible to know which reality is the true one.

I find it impossible to talk about Jacob’s Ladder without getting into what the movie actually means, or at least means to me, and this means getting into the ending. If you haven’t seen the film and don’t want the ending to be ruined , you should probably skip down to the end now.

The question to be asked when watching Jacob’s Ladder is what each of us will see when we die. The answer the film seems to be giving is that where we end up after our death is our own decision. Moving on means giving up on the life we had, and that clinging to life essentially tortures us and breaks us down. Jacob’s Ladder puts a new spin on the old “it was all a dream” motif, giving us a two-hour ride into a man’s mind as he decides whether or not to make peace with his life or cling to the scraps that remain.

Both of these movies are difficult to classify in terms of genre. Neither one fits comfortably into any particular type of movie. Both have elements of horror films, and both are unquestionably at least partly psychological drama. Both can also be difficult to watch, although of the two, Jacob’s Ladder is both scarier and more rewatchable.

The human mind is a terrible thing to waste, and a very scary place to get lost in, as both of these films aptly demonstrate.

Why to watch Pi: It’s a head trip like no other, a disturbing, waking dream.
Why not to watch: You’re not ready to be more freaked out by math than usual.

Why to watch Jacob’s Ladder: An old trope given new and terrifying clothing.
Why not to watch: You scare easily.
Posted by SJHoneywell at 10:20 PM