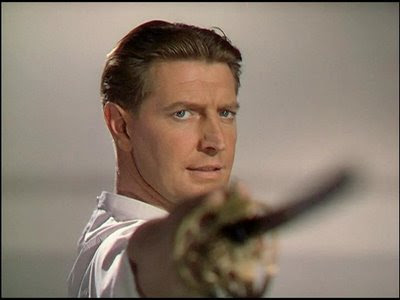 Change is difficult, but in today’s world, it’s something that comes faster and faster all the time. We learn to adapt to change because we live in a world where we have to. This hasn’t always been the case, of course. There was a time in the past when the world changed slowly, and it became easy to become comfortable, particularly for those of the wealthy class.

The Life and Death of Colonel Blimp concerns itself with Clive Wynne-Candy (Roger Livesey), a British officer of the old model. While the first few minutes of the film take place in the mid-1940s at the height of World War II, most of the film takes place in flashback. However, those first few moments are important. We learn that the British Home Guard is planning a training exercise. “War starts at midnight” is the phrase, but a contingent of troops believes it would be more instructive to start the war immediately, acting more in the manner of the current modes of war.

This causes a stern, arguably extreme reaction from the man leading the Home Guard, General Wynne-Candy. To help us understand how Candy, frequently called “Shuggie” or “Sugar” Candy, became the tubby old general he did, we flash back a good 40 years to the Boer War, when Candy has returned from service in South Africa.

The story here is too long to go into details—the restored version of the film clocks in at just under three hours. What is important is the personage of Candy, the important women in his life, and the man who begins the film as his enemy and ends as his greatest friend. The first woman and the friend he meets almost immediately. Returning from the Boer War a decorated hero, Candy learns that a man in Germany has been casting slurs against Her Majesty’s troops. Candy travels to Berlin, meets up with Edith Hunter (Deborah Kerr), and fights a duel with Theo Kretschmar-Schuldorff (Anton Walbrook). Both men are wounded—Candy takes a slash to the face that causes him to grow a mustache—and wind up fast friends. Both men also fall in love with Edith, but Candy doesn’t realize he loves her until much later, after she has married Theo.

Candy marries Barbara Wynne (also Deborah Kerr), a nurse he met on the last day of World War I in France. The two have a quick courtship and an evidently happy marriage, in part because Barbara is the absolute image of Edith. In the 30s, Barbara dies in Jamaica.

During World War II, Theo is a refugee from Germany, Edith having died in 1933. Candy has been forcibly retired from the service, but signs up with the Home Guard to make himself useful and to use the years of military expertise he has gained fighting in a number of wars. It is here he meets the final woman in his life, Angela “Johnny” Cannon (Deborah Kerr for the hat trick). He had selected her as his driver out of 700 girls, again because she is the image of Edith, and in this case, his late wife.

What happens with Wynne-Candy is less important than his reaction to various events in his life. His reaction is, essentially, nothing unless it is to lash out against the changes that he cannot fathom and a world he no longer understands. He represents a sort of old-school guard of soldier who not only believed that war was an honorable profession, but lived the truth of it. Once a battle was over, once a fight was done, it was possible, even likely, to become good friends with your former enemies. At the end of World War I, he says to his aide Murdoch (the underappreciated John Laurie), “Right makes might.” His meaning is the England won, despite the treachery of the German Army—in the face of poison gas, the bombing of free cities, and tricks that an honorable foe would not attempt, Britannia still came out on top. Essentially, the Allied victory did nothing but reinforce his world view—that a man could still be an honorable soldier of the old school.

Time passes in interesting ways in the film. Since the bulk of the movie is concerned with Candy’s military service, the times between the wars are passed in montage. It is evident, for instance, that between the Boer War and World War I, Candy spent his time traveling and big game hunting. The years pass not with a flipping calendar but with the sudden appearance of a series of animal heads on the wall of his den. Additionally, even significant events like the deaths of Barbara and Murdoch occur not in front of us, but merely as clippings from a newspaper, as if to say these events were not important enough to show.

Most interesting of all is the fact that the biggest moment of the film occurs when Candy is not present. Attempting to enter England during World War II, Theo gives an impassioned speech about why he left Germany, one of the most moving few minutes of film created in the 1940s or since. However, Candy misses the speech, in a way preventing him from understanding that his way of looking at the world no longer works.

Candy is an anachronism, a dinosaur, a horse and buggy in a world of cars, and everyone but Theo tries to insulate him from that reality. When Johnny becomes aware of her boyfriend Spud’s (James McKechnie) plan to circumvent the war game, she tells him he can’t because Candy is such a dear old man and it wouldn’t be fair. While possibly true, Spud’s entire point is that the time for playing fair has long since passed.

It’s worth commenting on the name of the film, since it does not appear to refer to anyone in the movie, and since the film ends with Candy standing tall and offering a salute. “Colonel Blimp” was a cartoon character in the U.K. from the 1930s to about the 1960s. Colonel Blimp was the personification of the ultra reactionary military leadership, unable to change, see reason, or even make sense. His statements were filled fire and brimstone nonsense along the lines of “By Gad, sir! Mr. Smith-Smythe is right! The only way to preserve a free press is to shut down the newspapers and prevent them from talking against us!” The film is not so much about the life and death of Clive Candy, but the life and death of this type of thinking.

It’s also worth noting that this film was created in 1943, at the height of World War II. Censors in England and Churchill himself tried to get the film banned, and prevented Laurence Oliver from playing the role of Candy. What’s most shocking in the film is Theo, who is, sympathetic, the voice of reason throughout, and German. The film was written and directed by the dynamic team of Michael Powell and Emeric Pressburger; Pressburger, it should be noted, was a native Austrian who emigrated to England.

I did not know what to expect with this film, but I’m very glad I chose to watch it early in this countdown.

Why to watch The Life and Death of Colonel Blimp: A great, gutsy story and incredible performances by Livesey, Kerr, and especially Walbrook.
Why not to watch: You fear change.
Posted by SJHoneywell at 7:53 PM