The Lord of the Recliner

Films: The Fellowship of the Ring, The Two Towers, The Return of the King, extended versions
Format: DVD from personal collection, big ol’ television 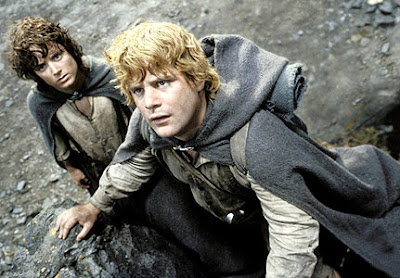 So why start here? Several reasons. When I first came up with this lunatic idea, it occurred to me that at least for a few days, I’d probably have to depend on my personal collection of films. It also made sense to start with a grand gesture, and few gestures could be more grand than an 11-hour sit-down. More importantly, psychologically, The Lord of the Rings trilogy concerns a great quest against impossible odds. Since I feel that that’s what I’m on, watching a bunch of people do the impossible gives me some hope.

Depending on which fanboy you talk to, The Lord of the Rings as envisioned by Peter Jackson and company is either the greatest achievement in the history of humanity or the largest abomination of the same. One breed of fanboy is excited to see a fantasy film (or three) that doesn’t flat-out suck, which makes these movies the pinnacle of moviedom. The others see any deviation from Tolkien’s story as rank heresy, and since the movies do deviate in significant ways, they must thus be worthless.

Fortunately, as far as this production goes, I am not a fanboy. While I’m certainly a geek/nerd/dork, I’ve actually never made it through the entire written trilogy. I’ve read most of it, but I can’t get all the way through. Page after page of dwarven poetry really does nothing for me except make me sleepy. So, dork though I am, I’m evidently not a very good dork. As I am not a true fanboy, I don’t have an extreme opinion on The Lord of the Rings trilogy.

The trilogy is a huge achievement. Merely adapting the books into something that could be legitimately filmed is noteworthy. It is also gorgeous to look at. When the trilogy was in theaters, people made a great deal of noise about the fantastic scenery of New Zealand, and it truly is spectacular enough that it looks like a fantasy world. It’s not just that, though. The filmmakers created an entire world for these movies—everything looks like it fits, from the old books and maps to the racks of mugs in Bag End.

Each of the movies in and of themselves is a remarkable piece of film. Beyond that, it also works very subtly. After the introduction , we are quickly introduced to Bilbo Baggins, but the first truly major character we see is Samwise Gamgee, who in many ways is the true hero of the trilogy. He’s not named in this quick shot of him holding a plant, but it’s a quick glimpse at the character who not only holds the introduction to hobbits together, but who ultimately holds the trilogy together as well.

The other remarkable thing about the entire trilogy is that despite the presence of elves, dwarves, orcs, uruk-hai, wizards, and the like throughout, they are essentially human films. For all of its epic sweep, this is essentially the story of people, and their own growth. Each character, or at least each major character, has his or her own story arc, and follows a personal journey as the ring goes on its trip from the Shire to Mount Doom. Eowyn, for instance, goes from being a troubled maiden to a true power. Aragorn deals not only with the threat to his world but his own reneging of duties and destiny to become a true leader of men. Pippin and Merry grow up and become men. And so on. Every character is more than simply something in support of Frodo’s quest to destroy the ring, but has a story independent, or at least tangential to the main storyline. Even those characters who do not survive the trilogy, like Boromir, grow and become more than they were when they started. Boromir’s weakness becomes strength before his death, and Aragorn’s benediction of him, “You fought bravely; you have kept your honor” shows this.

It’s easy to miss this growth when the films are watched days or months apart; easier to see it by far when the trilogy is viewed as a single film. Witness, for instance, the reluctance of the hobbits to pick up the blades from Aragorn on Weathertop in The Fellowship of the Ring contrasted with the immediate willingness of Merry, Pippin, and Sam to rush into battle by the middle and end of the third film. By the time the final film rolls around, it’s easy to forget where the hobbits started, since they have grown so much.

For the true die-hard fanboy, it’s easy to fault the trilogy for the changes. Shelob, for instance, appears at the end of The Two Towers in print form, but doesn’t make an appearance until a good way into The Return of the King here. Tom Bombadil is gone completely; other characters have been shoehorned into a single body. Saruman’s end may be the biggest change, or at least his fate and the fate of Wormtongue. These changes don’t bother me. Film is its own medium, and certain changes need to take place to make something filmable. To my mind, nothing significant is lost with these changes, and the telescoping that this allowed for helped streamline an already epic-length story. Instead of detracting from the story, these changes enhance the film version.

If I do have a complaint, it’s how Gimli was used as a character. From the books, I remember enough that Gimli was an honorable character, but here, while fearless, brave, and a great warrior, he is used much more for comic relief than he needs to be. Pippin and Merry already make for a good deal of comic relief, particularly in the earlier films—I would have preferred Gimli to be more than a guy who falls off his horse and trips a lot.

One aspect of the trilogy that is done particularly well is how the ante is constantly upped. I can remember watching The Fellowship of the Ring in the theater and being completely awed by the battle sequence at the end of the film. Watching Legolas drop orc after orc, Boromir nailing one with a thrown dagger, Gimli dividing his axe, even the hobbits getting a kill or two, and thinking, “that’s going to be difficult to top for awesomeness.” And then there’s Helm’s Deep in The Two Towers, followed by the battle at Minas Tirith in The Return of the King. Helm’s Deep makes the fight in the forest look like a tea party, and Minas Tirith makes Helm’s Deep look like a pillow fight. It gets consistently bigger and grander, and with more at stake.

What also works for me is how the three movies themselves interact. In, say, the Star Wars trilogy, there’s a particular trajectory that the story takes. Star Wars ends on a huge up-note, Empire on the lowest of lows, then Jedi on a larger high. The Fellowship of the Ring ends on a down note with the death of Boromir and the breaking of the fellowship, while The Two Towers ends higher after the defense of Helm’s Deep. It’s less a rollercoaster than a climb up, and I like that progression.

Of course, no one really watches The Lord of the Rings for character progression or plotline. It’s all about the effects, the costuming, and the battles. The battles truly are spectacular in the truest sense of the word. LotR is all about spectacle, about constantly and consistently showing the audience something it hasn’t seen before. Whether that’s giant oliphants in battle, hordes of orcs storming a keep, or an army of spirits, the trilogy is filled with the fantastic and amazing. Gollum/Smeagol is the greatest of these creations, a unique blend of acting and technology that looks as real as anything else in the movies.

But there’s more than this. There are scenes in all of the movies of startling beauty and power. Pippin’s song in the hall of Denethor is one of the saddest things I’ve seen in a film, and is truly beautiful and poignant. Even the extended coda, which would be unnecessary in a shorter epic (like there are longer ones) has its own beauty and wonder. It’s noteworthy again that Sam gets the last word here, too.

All in all, these three movies contain everything I want in film: spectacle, humor, action, adventure, and a believable reality I can get lost in. Ultimately, although parts were cut from the books and changes were made, Peter Jackson and company captured the idea of Tolkien’s work, the heart and spirit of it. The films contain just enough detail to make the world believable without overwhelming the audience with minor things that ultimately mean nothing. It will stand for possibly the rest of my life as one of the greatest film achievements simply to bring this work to the screen in a legitimate form, regardless of whether or not the movies were any good. It certainly doesn’t hurt that all three of the movies are truly great.

As a final note, it’s worth watching the extended versions of all three films. Unlike many extended versions that add a few minutes here and there, the additional footage across the three films here tacks on slightly more than two full hours, and virtually all of these scenes really add something to the story being told. Whether this is the scene of the gifts being given to the fellowship by Galadriel or Pippin interacting with Faramir before the failed attack on Osgiliath, these scenes reveal more about character and enrich the total package. The theatrical releases were great, and combined won 17 Oscars, but they can’t stand up to the full epic. You may also notice that I didn't talk a lot of plot here. The reason for that is simple for these movies. Either you've seen them already, or you haven't, and don't care enough about plot to read it here.

Why to watch the LotR trilogy: Arguably the greatest trilogy in film history and unquestionably the three greatest fantasy movies ever made.
Why not to watch: Because you hate fantasy.
Posted by SJHoneywell at 11:02 PM

Email ThisBlogThis!Share to TwitterShare to FacebookShare to Pinterest
Labels: Best Adapted Screenplay, Best Director, Best Picture, epic, fantasy, Lord of the Rings, Peter Jackson, The Fellowship of the Ring, The Return of the King, The Two Towers