Something is Wrong in Santa Mira

Film: Invasion of the Body Snatchers
Format: DVD from personal collection on laptop. 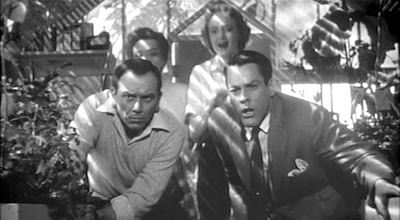 There are stories out there that have become such a part of the consciousness of the country or the world that it’s difficult to tell where they started. For instance, the current rage with zombies would not have started without the help of George Romero in the late 1960s. Before Night of the Living Dead, a zombie was something created by a voodoo priest, not a ghoul that wants to eat people. Romero rewrote that bit of the culture, and nevermore will it switch back.

Such a story is Invasion of the Body Snatchers. I probably hear a reference to “pod people” at least once a month, and every one of those references stem from this one point. If you haven’t seen this movie, you likely still know what is meant by that particular reference, so strong is the basic story embedded in the culture.

The story involves the small town of Santa Mira, California, and a disturbing visitor from outer space. Doctor Miles Bennell (Kevin McCarthy) has been recalled from a medical convention by his nurse. It appears that there is a rash of strange occurrences in Santa Mira; a number of people believe that their relatives are actually imposters.

Bennell is also reacquainted with an old flame, Becky Driscoll (Dana Wynter). The two of them visit Becky’s cousin, who is convinced that her Uncle Ira is not really himself. A quick examination later, and Miles and Becky are convinced this is merely a passing thing. The two of them, both recently divorced from marriages gone bad, decide to have dinner together, but are interrupted almost immediately by an emergency phone call. Jack (King Donovan), a local writer, needs Miles’s help.

Jack shows Miles and Becky a body that Jack found in his house. The body, while dead, looks unlike any other body they have ever seen—it looks unused, essentially, and when Miles tries to take fingerprints, they discover the body has none. While the body has no real character, it looks vaguely like Jack, and it is roughly his height and weight.

That night, Jack’s wife Theodora (Carolyn Jones) discovers that the body looks more than a little like her husband, down to a fresh cut on the hand. The pair race to find Miles, who investigates Becky’s house, discovering another partially-formed body, this one looking like Becky.

What has happened, they discover, is that alien pods have landed in a local farmer’s field. These pods can take on the likeness of people, essentially becoming them in all but emotions. They have the same memories as the people they duplicate, they have the same speech patterns, the same scars, and all, but they are essentially emotionless. The changeover happens when the victim goes to sleep; upon waking up, the newly awakened pod person is established as the old identity, while the original human being simply vanishes.

Fun stuff. It becomes even more fun with the group of four discover new pods in the back of Miles’s house, and they slowly come to realize that the entire town has been podified before them.

It’s easy to compare this movie to the McCarthy era (the Joe McCarthy era, not the Kevin McCarthy one) and find parallels. The pod people look like us, but are emotionless and cold, and every one of them is essentially exactly the same (just like Commies!). Or, the pod people allow no deviation of thought and can have no one thinking against them (just like McCarthy!). The author of the original Collier’s serial, Jack Finney, claims that there was no intent to comment on McCarthy in either way, a comment echoed by director Don Siegel. Still, it’s impossible not to see it in the film.

I’ve read the book the movie was based on, and while the film is fairly accurate, it’s also considerably different in places. For one thing, oddly, the film has much more of a downer ending than the book, a rarity in Hollywood. The ending here is in many ways more effective. The original ending consisted of Dr. Bennell running down the middle of the highway screaming “They’re here! You’re next!” and the revamped ending is not much brighter. In the book, things are considerably happier when the equivalent of the curtain closes.

I remember watching this as a kid. It’s probably the first time I was ever aware of being frightened from watching a movie, and it’s still a film that has the ability to be unnerving. It’s a worthy watch, and the first remake (the one from the 1970s) is worth watching as well. Skip the 90s and 00s versions of it, though, and stick with the ones that actually have something to say.

Why to watch Invasion of the Body Snatchers: It’s the first version of a classic societal trope, and it’s damn good.
Why not to watch: You freak out easily.
Posted by SJHoneywell at 11:54 PM