Films: Star Wars, The Empire Strikes Back, Return of the Jedi
Format: VHS from personal collection on big ol’ television. 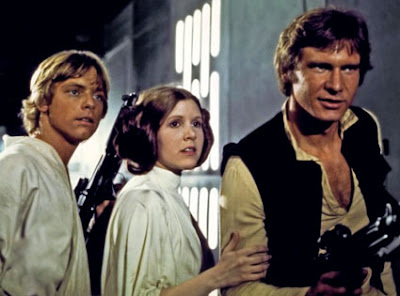 Anyone in his or her late 30s to mid-40s now grew up on Star Wars. For many of us, myself included, what Lucas created was not so much a movie as a world we all wanted to be lost in. My most vivid memory of Star Wars is not the first time I saw it, nor even the year it came out, but the following summer.

Every Saturday morning, I would walk two houses down to my friend Pat’s house. We’d do chores for his mom, she’d pay us a couple of dollars, and she’d say, “Go see the movie.” For that entire summer, “the movie” at the Wheaton Theater was Star Wars. Pat and I saw it every Saturday from June through September. We got to where we could pretty much recite the entire film by heart. Our moms wouldn’t buy us the official blasters, so Pat and I made our own in his dad’s workshop. Man, we loved that movie.

Then came The Empire Strikes Back and Return of the Jedi. For anyone remotely interested in science fiction, the trilogy represented a high point in science fiction, a bit of respectability in a genre that needed some. What followed were the inevitable battles between Star Wars geeks and Star Trek geeks, a cause of tension in the fan community and a cause of laughter and scorn for anyone not involved. For the record, I was not involved.

Lucas went back and added a bunch of stuff to the original trilogy and re-released them and then, finally, produced the original trilogy as well. And this is where I stepped away from the Church of Jedi. I saw Episode I in theaters, hated it, and swore off Star Wars in general. I still haven’t seen Episode II or III, and I don’t have any plans to. With the re-releases and the crappy new trilogy (yeah, I know I haven’t seen two of them, but Episode I sucked hard), I decided that Lucas had screwed my childhood enough. I was done.

This is why, when it came time to watch the original trilogy again, I didn’t go looking for the revamped versions, but I retreated to my old VHS copies of the original original trilogy. The one where Han shoots first and there are no giant damn lizards walking around Mos Eisley spaceport.

It’s not really worth going into plot here. You’ve seen the trilogy or you haven’t. If you haven’t, you’re either too young to remember the films when they first came out or you really don’t care about them. If you have, you already know the story. You know it’s a story of good versus evil and that it’s a western in space. It’s a classic space opera with laser guns, spectral forces, and the most evil of evils to grace the screen since The Exorcist.

But let’s be honest here. As much as I may love the original Star Wars, it’s hardly an original story. Consider this: Frodo/Luke Skywalker grows up in an out-of-the-way part of the world/planet. He discovers that only he can journey with his group of companions to destroy the One Ring/huge space station to prevent Sauron/the Evil Galactic Empire from destroying everything good and nice.

But it is fun, and for an entire generation it influenced the thoughts of the people who write screenplays and direct movies. What Star Wars does really, really well is create a completely believable universe for what it is. Everything meshes perfectly as if it were a film about the real world. The philosophy, the worlds, the creatures, even the galactic empire all makes sense. It also comes with its own vocabulary—X-Wing, TIE Fighter, proton torpedoes, light saber, etc. Even the sounds are iconic—there’s nothing else in the movies that sounds like a TIE Fighter.

Even with the improvement in technology, and this has been quantum several times over, Star Wars still looks vibrant and still contains within it a sense of childish wonder and fantasy. Even though I can seen the equivalent of the wires, there is no faster way for me to recapture my childhood than to sit down with Luke, Han, Leia of the shifting accent, R2, C3PO (the galaxy's gayest robot) and the rest of the crew. This is true to the extent that hearing the Twentieth Century Fox musical overture immediately makes me think of Star Wars.

From Star Wars we move to The Empire Strikes Back, which is the holy of holies for any Star Wars geek worthy of his or her mettle. Empire is the best of the trilogy for any number of reasons. We get more exotic locales (Hoth, the cloud city) and are introduced to what would become one of the most criminally underused bad guys in history: Boba Fett. We also get the first view of the Imperial AT-ATs, which, to extend the LotR metaphor, are quite a bit like oliphants.

What sets Empire apart is that unlike a traditional movie trilogy, this movie is a huge down-note for the good guys. Nothing good happens to the Rebellion in this film. In a sense, there is more of a literary feel to this trilogy as compared with other film trilogies. The Alien films, for instance, end with the alien(s) getting shot/killed/pushed out an airlock/whatever. Each movie contains its own story. More modern trilogies tend to be less trilogy and more introduction and two follow-ups. Pirates of the Caribbean, for instance, had a great first film followed by a pair of movies that felt like two halves of one whole. Star Wars, however, is a real trilogy. As the middle installment, Empire is the place where the heroes are placed in the worst situations, where reality becomes as dire as it ever will be.

Everything ends in Return of the Jedi. Of the original three, Jedi is my least favorite. Certainly the technology is better, but…it’s those damn Ewoks. In Lucas’s original vision, the third installment was to take place on Kashyyyk, the homeworld of the Wookies . Instead, we get furry midgets with spears dancing around a campfire. What could have been a group of gigantic dog/monkies kicking ass and taking names turned into a cutesy forest romp with primitive Care Bears.

(Yes, I knew the name and spelling of the Wookie homeworld without looking it up. I did, after all, write the official guide for LucasArts’ Star Wars Rebellion for the PC and co-wrote the guide for Star Wars Force Commander. And I’m also a geek.)

Why to watch Star Wars: The most important piece of popular science-fiction…ever.
Why not to watch: I can’t think of a reason.

Why to watch Return of the Jedi: You’ve already come this far.
Why not to watch: Dancing teddy bears.
Posted by SJHoneywell at 6:58 PM