Westerns Then and Now 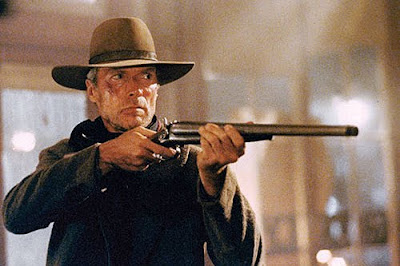 Of all styles of film working today, it is the western that is the most frowned upon. Even horror movies get more respect than a typical western. I think this stems not from the genre itself so much as the perception and conventions of that genre that people have learned.

If you look at old westerns (and we’re looking at an old one today), there are plenty of reasons to be jaded by them. They all have the same basic plot—cattle ranchers/railroad barons/greedy bar owners want to control all of the land in the area, so they plot to run out the sheep herders/farmers/honest ranchers and townsfolk, but a hero(s) rides into town to put the bad guys in their place, shoot everyone wearing a metaphorical black hat, and then ride off into the sunset. It’s a pretty tired plot.

With Unforgiven, Clint Eastwood wanted to make a more realistic western, one that didn’t necessarily follow the standard plot that many of us have come to know and be bored by. Oh sure, a stranger rides into town bent on revenge, but there’s much more to the story than that. The characters themselves are far less stock than in a traditional western, and we get to see some very different sides of them.

In this case, the main character is William Munny (Eastwood), who is confronted by a young man calling himself the Schofield Kid (Jaimz Woolvett). The Kid has heard a rumor of a woman in the town of Big Whiskey, Wyoming who was cut up by a pair of cowboys. There’s a $1,000 reward for killing the two men responsible, and the Kid wants some backup. Munny, however, has given up the life of an assassin, but agrees to come because he needs the cash. He won’t come without his friend Ned Logan (Morgan Freeman) to help out.

As it turns out, the story is mostly true. A prostitute named Delilah (Anna Levine) had her face slashed by a cowboy who was angered by the fact that she laughed at the size of his…natural weapon in his pants. The other prostitutes pooled their money as a reward, but they are confronted by Little Bill Daggett (Gene Hackman), the town’s sheriff. He won’t allow guns in Big Whiskey, and he keeps the peace by any means he can, even to the point of shooting a man just for riding into town with a gun.

The first person attracted to the reward is English Bob (Richard Harris), who comes with his biographer, an Easterner named W. W. Beauchamp (Saul Rubinek) in tow. After Daggett trashes Bob, Beauchamp switches his allegiance, deciding that Daggett is a much more interesting subject for a book.

Things, eventually, come to a head. Ned gets captured by the law after he loses his nerve while Munny, who gave up his life of sin for the sake of his now-dead wife, slowly but surely reverts back to his old ways with the gun.

Unforgiven is an appropriately named film, as it is itself completely unforgiving. Westerns have long had a reputation of being family fare, somewhat tamer in terms of language and sexuality. Again, I think this comes not specifically from the genre or the subject matter, but from the fact that westerns were popular in a time when the code for films was much stricter than it is now. Unforgiven doesn’t fall into that particular trap. There’s not much in the way of sex, but there’s plenty of language throughout, which I find refreshing in a western.

In terms of what this story is about, there are a number of possibilities. It could be argued that the film concerns itself with crime, punishment, and the nature of revenge, and that argument wouldn’t be too difficult to make. It could just as easily be argued that Unforgiven is less about revenge and more about the nature of one man and his inability to change who he is no matter the cost or the desire to change. It could simply be a rip-roaring story. What do I think? I think Unforgiven is a big enough story that it can handle all of these and more, like also being about the fact that destruction begets destruction, and that even for the innocent, frontier justice is sometimes the best we can expect. Unforgiven was the first western in a dog’s age to win anything at the Academy Awards, and it deserved the ones it won. 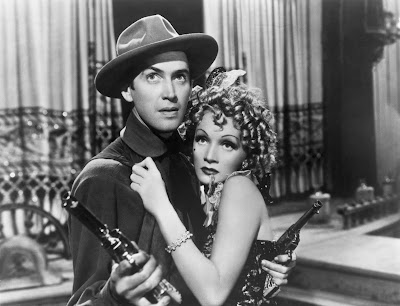 Destry Rides Again is much more a western of the old school, with guys in white hats and guys in black hats. Tom Destry (James Stewart) is the son of a famous lawman. He’s called to the town of Bottleneck by his father’s old deputy, Wash (Charles Winninger). Wash has recently been appointed sheriff of the town because of the death of the old sheriff at the hands of Kent (Brian Donlevy), a crooked local businessman. Kent’s partner in crime is his showgirl, Frenchy (Marlene Dietrich). Wash was promoted to the position because in addition to being a former deputy, he’s also the town drunk.

Destry arrives, and it turns out that he’s not what anyone expected. For instance, instead of showing up with guns blazing, he shows up with little parables about folks he knows and the refusal to carry a gun. Destry is the town laughing stock for a bit, but soon settles into his role. That role is essentially keeping the letter of the law while finding out what he can about Kent and the rest of the bad guys in town.

Destry Rides Again is definitely a product of its time. It’s a clean western with clear-cut good guys and bad guys, with the possible exception of Dietrich, who may well be the prototype of the hooker with a heart of gold. There are a few painful stereotypes, in particular the Russian (Mischa Auer) who is less a Russian and more of a generic foreigner, and Frenchy’s maid, who is a baby step away from Butterfly McQueen’s role in Gone With the Wind.

Why to watch Unforgiven: A classic western with modern sensibilities, and some truly memorable characters.
Why not to watch: ^*$@ing language all the ^%^*%ing time.

Why to watch Destry Rides Again: A classic western with Jimmy Stewart.
Why not to watch: Marlene Dietrich can’t sing.
Posted by SJHoneywell at 8:27 PM