My Day in Court 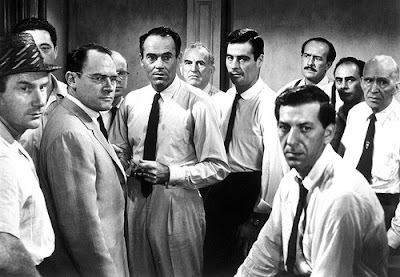 Courtroom dramas have a long history in film, and with good reason. A trial, at least a good trial, is inherently filled with drama. In these two movies, the cases involve murder, which makes them even more interesting because, well, they’re about murder. Of the two films, only Anatomy of a Murder smacks of realism; 12 Angry Men simply doesn’t.

Fortunately for us, 12 Angry Men doesn’t have to be reality for it to be a noteworthy film and worth watching. In this movie, the trial is merely window dressing for the actual story here. In fact, we only get to see the very tail end of the trial when the judge charges the jury with its job of finding the accused guilty or innocent. The case is that of a young man accused of murdering his father with a switchblade, and it feels very much like an open and shut case. At the outset, 11 of the jurors believe the young man is guilty while one is undecided and wants to talk more about the case itself before deciding.

That’s all—since it’s a murder case in New York in the late ‘50s, the death penalty is on the table if a guilty verdict is returned, and he just wants to be sure.

Using that as a starting point, 12 Angry Men is an allegory, plain and simple. In fact, it’s so much an allegory that the characters don’t even have names beyond their juror numbers except for the very end. Except for the first few and last few minutes, the entire film takes place in a jury room, making it one of the easiest sets ever created in the history of film.

It’s also an allegory in the sense that the 12 characters are, in no small sense, caricatures, or at least idealized stereotypes. Henry Fonda, as Juror 8, the lone holdout, is the man who stands against society because it is the right thing to do. Ed Begley, Juror 10, is the racist who makes his decisions based not on fact but on prejudice. Jack Warden, Juror 7, equates everything to a sports analogy and makes jokes throughout the case. E. G. Marshall is a man of logic who makes his decisions rationally, while Lee J. Cobb plays the tortured father, damaged by his relationship with his son and looking to rain down justice on someone else’s son.

As the film goes on, Juror 8 slowly begins convincing others of his side of the story. He brings up subtle points that the defense attorney missed. He slowly starts to build the idea of reasonable doubt in the minds of the other men, who one by one start to understand his point of view.

For the story being told here, a jury trial is merely a convenience; the movie is really about the power of standing against the crowd, of believing in oneself and going against the masses for the right reason. The actions and responsibility of a jury simply make that story more easily told. As the case continues to unfold in the jury room, each of the men at some point reveals himself for what he is.

The actual guilt or innocence of the young man on trial is never revealed, because it isn’t important. Ultimately, the jury’s decision isn’t that important either. What is important is the actions of Juror 8 in standing his ground and simply wanting to make sure that the case is fully discussed before any decision is made. The interplay of the characters is what makes the film work, and what makes the film so compelling to watch. It certainly helps that the film is brilliantly acted by all involved. 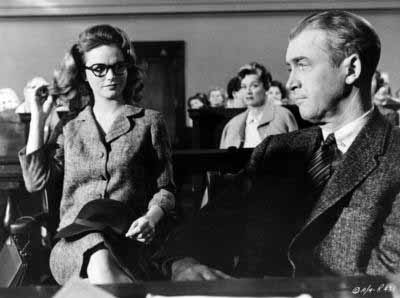 The man here is a Lieutenant Frederick Manion, played by Ben Gazzara. Manion shot a man named Barney Quill, who owned a local bar. He admits the killing, but also claims that he was justified in the murder because Quill had raped Manion’s wife Laura, played by Lee Remick. The defense attorney, Paul Biegler, played by Jimmy Stewart, is reluctant to take the case initially, but does so.

His reasons for taking the case are two-fold. He’s a former district attorney recently run out of office by a new hotshot named Mitch Lodwick. Since losing the position, Biegler has spent his days on a fishing boat avoiding work, playing jazz piano in bars, and drinking with his alcoholic mentor Parnell McCarthy, played by Arthur O’Connell. This case gives him a shot at taking on the man who removed him from his former office to prove that he’s the better man. The second reason is that he’s convinced Manion that he’s got a potential defense. Lodwick, wanting to make a splash with a murder conviction, brings in assistance from the Attorney General’s office in the form of Claude Dancer, played by George C. Scott.

Biegler, like any good defense attorney, is more concerned with winning the case, even on a technicality than he is about the potential innocence of his client. Of concern are the things that stand against Manion’s chances for acquittal. There’s no real evidence that Laura Manion was raped, and that’s a major strike. Manion himself is unlikeable and somewhat nasty. Most important is that Laura Manion is a flirt and a manchaser, and there’s substantial evidence that Barney Quill may not have so much raped her as committed a consensual act with her, and was then killed for making time with the wrong man’s wife. This is best evidenced by her appearance at a juke joint with several strange men while her husband languishes in prison, followed by her steamy play for Biegler’s attentions.

Is this an indictment of the trial system in the United States? It well may be, and it’s a good one. Regardless of the motives of Otto Preminger concerning American jurisprudence, there are some noteworthy parts of this film that need to be addressed. The jazz soundtrack is one of the best around, and was composed and performed by Duke Ellington, who makes a cameo appearance as a band leader at a honkytonk. Additionally, the film breaks formerly taboo territory in terms of subject matter. While earlier films have covered some dangerous ground, this one brings in some language that hadn’t really been heard in films before. There’s plenty of talk of semen and panties, for instance, which was pretty racy for 1959.

One of the more interesting additions to this film is the personage of the judge who presides over the trial of Manion. This part is played by Joseph N. Welch, who is most famous for defending the U.S. Army in the McCarthy hearings. He’s the guy who stood up to McCarthy and said, “Have you no sense of decency, sir; at long last, have you left no sense of decency?"

Anatomy of a Murder focuses on points of law and procedure. Innocence and guilt simply aren’t critical to the case. Biegler arranges his case by asking the right questions that can’t be answered in open court to get the jury thinking the way he wants, working his case not by proving his client innocent but instead by planting ideas in the minds of the jury. He pushes the idea of the rape so consistently, that when the prosecution eventually slips up, he gets the evidence placed into the record.

Why to watch 12 Angry Men: Twelve great roles perfectly acted.
Why not to watch: You need to know if the guy was guilty or not.

Why to watch Anatomy of a Murder: Great jazz, interesting twists and turns, and a sexy Lee Remick.
Why not to watch: You don’t want to consider that American justice might be flawed.
Posted by SJHoneywell at 11:40 PM