We should get a couple of things straight right off the top here. I consider myself a non-theist, which is a baby step away from agnostic. I don’t go to church regularly, or at all. I don’t believe in the power of prayer, I don’t believe in a higher power that intercedes for people, and I don’t believe in the normal Christian version of the afterlife (good or bad). I’ve toyed around with a variety of religious beliefs in the past, and find that if I had to pick one, I’d probably go primarily with Buddhism despite my liberal Christian upbringing. I’m also of the opinion that religion—not faith, mind you, but religion—has been responsible for the vast majority of evil done in this world historically and today as well. 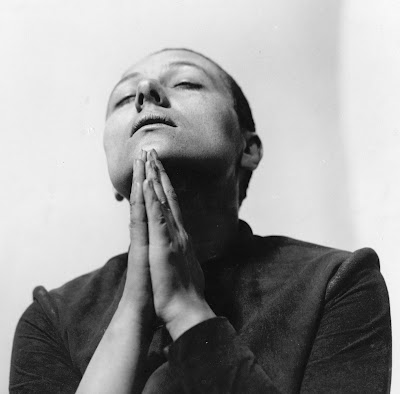 I wanted that clear from the beginning, because The Passion of Joan of Arc is the closest thing I’ve had to a religious experience in well over a year. I’m not saying this is a positive or a negative, but something that is simply true. This is not a happy church service; it’s much more akin to dealing with the Inquisition or the Salem witch trials, but it’s still a church service.

This film was based on the transcripts of the actual trial of Jeanne d’Arc. Every line that she “speaks” (or at least every line attributed to her in the intertitles) comes from the transcript of the trial. And speak she does, as do the men who are questioning her. In fact, it appears initially that there is little to this film beyond the heads of Jeanne (Maria Falconetti) and her accusers. Dreyer evidently spent a huge sum on the sets, and then basically filmed faces, letting those sets go to waste.

I wouldn’t call this film plotless, but the plot that exists is pretty obvious and the resolution is known to anyone who knows even a touch of history. The film covers only her trial for heresy during which she is accused of being misled by Satan, and of being from Satan himself. Joan (I’ll stick with the English translation of her name) states that she believes she is inspired by God instead. She is tortured and threatened with burning at the stake, and she recants her position and officially claims that she has been misled. Then she decides that this was a mistake—she really was inspired by God, and she is killed horribly.

However, this is not a history lesson. It’s a passion play, and the correlation with the traditional passion play of Christ is intentional. Joan is mocked, abused, tortured, and then killed, all the while protesting her innocence and her inspiration from God.

For being essentially a simple story simply told, there is a lot going on here. Dreyer’s focus on the faces of the characters is a huge change from the typical silent film. None of the players wears any makeup, allowing their emotions to truly show through and giving these intensely close shots a greater sense of realism. What we see is a true dichotomy. Joan stands alone, face raised to her accusers (and also to the heavens) in simple, unadorned beauty. The accusers scowl down at her, and to a man, they are ferociously ugly—balding, warty, creased old men. The blocking here gives the impression that Joan stands below them, highlighting her powerlessness as well as their temporal power over her. But don’t kid yourself; Joan’s looking up at them also allows her to continuously look up to God, and this is no doubt intentional, or at least a happy side effect of her accusers standing above her.

The film absolutely belongs to Falconetti, who gives one of the greatest performances ever filmed. Her face incredibly expressive, shifting from horror to terror to sublime ecstasy at a moment’s notice. Despite her moments of rapture, there is not a moment in which she is filmed that she is also not in anguish of some type. This film is not about her redemption or her eventual elevation to Catholic sainthood, but about her martyrdom, and it pulls very few punches. Joan is in constant torment, and it is overwhelming at times. Falconetti is plainly beautiful, which is partly her own physical beauty and very much the emotional content of her performance. It is the fact that she plays these beliefs so strongly that gives her both the presence and the beauty she displays here.

Dreyer never developed a definitive soundtrack for this film, and so it is frequently shown with no music or sound. Fortunately, there is available a version with a soundtrack called “Voices of Light,” which was developed specifically for the film. The soundtrack is glorious, particularly so if you are a fan of liturgical music. It greatly enhances the film experience.

Once again, as with many films, I can’t say that I enjoyed watching this, but I am very glad that I did. I may not be a religious person, or even in favor of most religious thought, but this is a religious experience I am happy to have undergone. Perhaps the most telling thing I can say about it is that I don’t think it would be improved with speech. It’s exactly right the way it is.

Why to watch La Passion de Jeanne d'Arc: One of the greatest filmed performances in the 100+ years of film.
Why not to watch: You’ll walk away from this drained.
Posted by SJHoneywell at 8:21 PM

Email ThisBlogThis!Share to TwitterShare to FacebookShare to Pinterest
Labels: Carl Theodor Dreyer, drama, The Passion of Joan of Arc