There’s something about a criminal mastermind that the public loves. Really. There is some sort of primal human belief that some crime at least comes from gigantic world-spanning networks of evil geniuses intent on (insert thunderclap) taking over the world. James Bond would suffer without Auric Goldfinger or Ernst Stavro Blofeld; it’s impossible to imagine Sherlock Holmes without conjuring up Professor Moriarty; where would Marvel Comics be without Dr. Doom? A good criminal mastermind, a century or so of fiction tells us, is ruthless, lethal, has special powers, and is just charming enough to be somewhat appealing on some level. 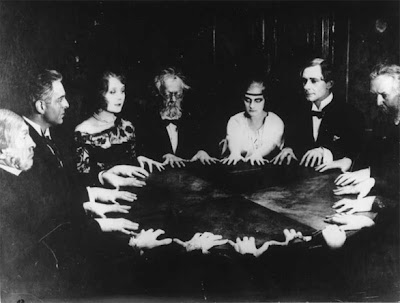 With this in mind, Fritz Lang adapted the novel of Norbert Jacques into Dr. Mabuse, der Spieler (loosely translated as Dr. Mabuse the Player, or more commonly as Dr. Mabuse the Gambler). The central character is exactly this sort of criminal presence. He controls a network of goons and thugs, and seeks to take over/destroy the world, essentially one card game at a time. Dr. Mabuse (Rudlof Klein-Rogge) has an encyclopedic knowledge of psychology, is a master of disguise, can hypnotize people with his intense gaze (and at times, it seems that not even eye contact is needed), and is ruthless when it comes to permanently removing obstacles from his path. Mabuse uses his disguises and hypnotic talents to cheat people at gambling tables, running away with their money. What he’ll do with this amassed wealth is anyone’s guess.

In fact, the film starts with another form of Mabuse’s epic manipulation abilities. In fact, it would seem that the ending of Trading Places comes from this film as Mabuse hijacks a secret report and uses this to manipulate the stock market. First he drives the price of something way down, then buys at a low price and drives the price way back up, making a killing for himself. This was clever and fun to watch.

Sadly, after this, it appears that we will spend the bulk of the rest of the film watching people play cards. Mabuse (which is pronounced “mah-BOOZE-uh” and not “muh-BYUSE”) has the ability to hypnotize people simply by staring at them really hard. What’s goofier is that he’s evidently able to make people do what he’s thinking rather than what he tells them. For instance, he “forces” a man to cheat at cards without saying a word to him. Evidently, he’s not a hypnotist, but a telepath.

Naturally, the forces of good want to stop him. The forces of good here are represented by a guy named von Wenk (Bernhard Goeztke). And here is where the problems with certain foreign and silent movies come to full fruition. According to the version I watched, he was States Attorney von Wenk. According to IMDB, the character is Chief Inspector von Wenck, or Chief Inspector de Witt. I can only go off the version I saw, though, so I’m going to call him von Wenk from this point forward, even though there’s a slight desire to call him “the Wank.”

Regardless, von Wenk sets his sights on finding the “Great Unknown” who has caused so much trouble in the unnamed city, presumably Berlin. Mabuse uses various disguises to sneak around places and rig card games in his favor. He also kills anyone who gets in his way. He is rather the prototype of the nefarious criminal mastermind, at least on film.

After nearly four hours of watching people chase each other and play cards, I’m going to boil this down into a good and a bad. It’s easier than recounting the plot, which involves suicides, murder, cards, hypnotism, and a lot of crepe facial hair.

The good is that this is a particularly interesting view of Weimar Germany. While Cabaret shows us the same time period in a more modern fashion, this film shows us the dissolution and debauchery of the wealthy while it was happening. It’s no secret that Weimar-era Germany was a divided society. While most of the population struggled with crippling inflation and not enough food, the few wealthy elite lived lives of idleness and plenty. Dr. Mabuse explores this, and the growing unrest. The character of Mabuse is a megalomaniac bent on conquering the world through his hypnotic gaze and mental powers. About 10 years after this film came out, a megalomaniac actually did take over in Germany. While I’m not suggesting that Lang was prescient, I would suggest that Lang’s film makes a case that some sort of power overthrow and societal shift in Germany showed signs early and may have been inevitable.

On the bad side, this film is really pretty dull. A lot of what happens doesn’t pass the sniff test, either. One of Mabuse’s minions, la Carozza (Aud Egde Nissen) is captured by the police and imprisoned. Knowing that she is being questioned by von Wenk, he causes a diversion (costing him another minion) and sneaks a man to her cell to convince her to kill herself. So she does. Fine, but here’s the thing. First, if she’s already leaning toward helping the police, wouldn’t a death sentence from Mabuse really just push her further? It’d make me talk in that situation. Second, the guy spends so much time trying to make her take the poison that he and Carozza could have sauntered out of the police station without anyone knowing. But no, this is to show us Mabuse’s ruthlessness. He’s ruthless, but he’s evidently pretty stupid.

Sadly, the film this reminds me of the most is the wretched and eternal Les Vampires except with crepe beards and disguises instead of secret passageways. Lang is better than this film, and I’m going to predict that in his collection that I’m watching here, this will be the weakest by far. I wanted to like this because I like Fritz Lang, but I can’t get beyond the fact that I was nearly bored senseless watching it.

Why to watch Dr. Mabuse, der Spieler: Early work of one of the greatest directors in the early age of film.
Why not to watch: It’s far less exciting than its premise.
Posted by SJHoneywell at 6:25 PM