Film: All Quiet on the Western Front
Format: DVD from NetFlix on kick-ass portable DVD player.

I imagine that in some sense, it’s not that difficult to make either a pro-war or anti-war film. If you want a pro-war, nationalistic film, you make your good guys noble and filled with idealism. You make your bad guys evil, cowardly, and nasty. The good guys defeat the bad guys against overwhelming odds, a few of the good guys die heroically, and everyone feels ennobled by the war. For an anti-war film, you make the good guys noble and heroic, and then you have terrible things beyond their control happen to them as they are tossed about by forced beyond their knowledge and control. Note that this doesn’t mean your film will be any good—but these seem to be the basic formulas. 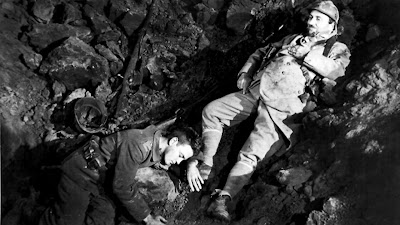 All Quiet on the Western Front is to my knowledge the first great anti-war film, and it came at a time perfect for anti-war sentiment. In 1930, the Great War was still a painful memory for much of the world, and it would be almost a full decade before the world would explode into war again. A treatise on the folly, destruction, and cost of war feels like a natural fit in this decade between.

We first meet a group of young Germans in school at the outbreak of what would eventually be known as World War I. These boys, assured that the war for the Fatherland would be a short one and egged on by their professor (Arnold Lucy), all rush to enlist in the Army and head off to battle and glory.

Those dreams of glory are short-lived, though. They first learn that life in training isn’t much fun, thanks to the presence of Himmelstoss (John Wray), their drill sergeant. Himmelstoss was formerly the boys’ mailman, but given this authority, he quickly becomes a martinet, causing no end of suffering and cruelty, forcing the young soldiers to do things simply because he can. After a bit of training, the new soldiers head off to the front, convinced that they would soon be bathed in glory and would return home to wow young women with their fancy uniforms.

The one we follow the most is Paul (Lew Ayers), a sensitive young man who is something of a leader of his friends. Much of the war is seen through Paul’s eyes and experiences. We suffer through the deaths of his friends, the insatiable hunger, the nightly raids, the privations of life in the trenches and at the front. Paul and the rest of his comrades quickly become disillusioned about why they came to fight at all, wanting nothing more than to go home and have nothing to do with fighting for their own survival.

There are a few key scenes that really put the hammer down in terms of Paul’s experience and the experience of the soldiers in general. One of the first is the visit of the surviving schoolboys/soldiers to their friend Kemmerich (Ben Alexander), who is convalescing in a field hospital. When they arrive, they discover that Kemmerich’s leg has been amputated. Eventually, Kemmerich succumbs to his wounds in front of Paul, and Paul takes his boots since supplies are short at the front.

The dreaded Himmelstoss eventually makes his way to the front as well, and proves himself to be a coward under fire. During this attack, Paul finds himself in a trench with a French soldier. He stabs the Frenchman, who doesn’t die right away. Paul, realizing that this man is essentially in the same position he is, does all he can to save him and asks for forgiveness, all in vain.

The most telling moments of the film don’t happen until the last 25 minutes or so. Paul, recovering from an injury, is given leave and returns home to find his mother ill. What he also discovers is that the people on the home front have no idea of the realities of the war, the privation, the suffering, or the death. He listens to men discussing the way that the war will be won and is told that despite his experience on the front, he has no idea of what it takes to actually win the war. He sees a world of comparative plenty—food, clothing, soft beds—and is told that everyone assumes that everyone is making sacrifices so the soldiers at the front can have supplies; the reality is that the men are reduced to eating sawdust because there is no food for them.

For me, the culmination of the film comes when Paul encounters his old professor still preaching his lesson of Fatherland and glory to a new crop of young men. Asked to speak to them, Paul tells them of his experiences on the front, and is called a coward for telling them the truth.

In short, All Quiet on the Western Front attempts to show the reality of war, the brutality of battle, the constant fear and death and desperation as well as the disconnect between those who fight and those who demand that others fight on their behalf. As a film, it is a good one, if overacted in that early talkies style. As a message against war and the desire for war, it is one of the most effective films ever made. Paul is entirely sympathetic, and his constant plight is nothing less than heartbreaking throughout.

I have a tendency to believe the reality of anti-war films more than pro-war films. That being the case here, All Quiet on the Western Front is one of the strongest statements against war that I have seen, and while it’s worth watching for a number of reasons, it doesn’t really need a reason other than that one.

Why to watch All Quiet on the Western Front: The most powerful anti-war message until the making of Idi I Smotri.
Why not to watch: In war, death seems to come mostly to those who don’t deserve it.
Posted by SJHoneywell at 11:44 PM