Akira Kurosawa is one of those directors who has enough great films in his repertoire that it’s not difficult to find a great one to watch. I haven’t seen his entire catalog by any stretch of the imagination, so it’s easy to assume that he has some lesser films and possibly a few stinkers in there. Hey, Hitchcock and Kubrick didn’t bat 1.000, either, and not every Bergman film is worth careful contemplation. 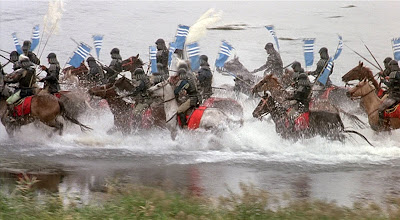 Ran is Kurosawa’s last great samurai epic, and “great” is the operative word in that sentence. It’s commonly thought of as Kurosawa’s take on Shakespeare’s “King Lear,” and the two stories do have more than a little in common. There are some significant differences, of course—hordes of samurai for one—but the stories have enough in common that it feels like a natural thought to call one the Japanese version of the other. However, a great deal of Ran feels like it comes from Kurosawa’s life instead. The production of this film saw the great director aged, alone, unable to secure backing, with the opinion of many being that the world of film had passed him by. This film showed that it hadn’t.

Ran centers on the Ichimonji clan, specifically on Lord Hidetora Ichimonji (Tatsuya Nakadai), a ruling warlord. Through his life, he has risen to the exalted rank of Warlord through feats of arms, brutality, and treachery. Now, nearing the end of his life, he wishes to retire and allow his sons to rule. So he decrees that he will retain his title, but will pass the rule over the Ichimonji clan to his eldest son, Taro (Akira Terao). Taro will rule at the first castle. Second son Jiro (Jinpachi Nezu) will hold the second castle. Third son Saburo (Daisuke Ryu) will hold the third. Jiro and Saburo are entrusted with these castles with the idea that should Taro need them, they will follow his lead.

While it seems like a nice plan at first, it immediately goes to smash. Both Taro and Jiro are ambitious and would like to rule entirely. Saburo still has respect for his aged father, and warns him that his plan seems like a very bad one. Since Lord Hidetora gained his position through ulterior means, expecting his sons to act together seems like insanity. Hidetora immediately banishes his son from his lands, and follows that banishment up with another. Also forced to leave is Tango (Masayuki Yui), his servant, because he dares to tell the Lord that Saburo is right.

Things go well for Saburo, though, since he is adopted into the house of Fujimaki. Things don’t go so well for Hidetora. Immediately, the scheming begins. Taro’s wife Kaede (Mieko Harada) tells Taro that he should be the Great Lord, and Taro forces his father to sign a compact giving up all his power. Hidetora signs, but then leaves immediately to go to the second castle and Jiro. Here he finds that Jiro wishes to use him as a pawn against Taro. Hidetora has no option but to head to the third castle, which proves to be a trap. His men and concubines are killed or kill themselves, but Hidetora cannot commit seppuku because his sword is broken. Instead, he loses his mind completely, and his rescued from wandering the wilderness by Tango and Kyoami (Pita), his fool and comic relief. All of this is the first half of Hidetora’s downward spiral from the great heights of warlord-dom to almost total dissolution.

The story is a great one. We have the great man who is torn apart not only by the life he led, but also by the decisions he has made and continues to make while his children essentially fight for the right to pick his bones clean. The same thing happens now often enough when a powerful and wealthy patriarch dies and his children fight over what he leaves behind. For taking place in the warlord era of Japan, this is a very modern story.

It’s also blood-soaked, as any film involving hordes of samurai should be. The aftermaths of battle are terrible and gruesome. In typical Kurosawa style, the battles are set pieces of direction and camera work. The initial major battle at the third castle, for instance, takes place in almost a dreamlike state, with music instead of battle sounds, until the reality of the situation he is in crashes around Hidetora, and the sounds of battle erupt.

Ran also has the benefit of being in color. I like a good black-and-white film, but the color here brings something to the table that Kurosawa’s previous samurai epics did not have: the pageantry and spectacle of the samurai armies arrayed on the battlefield. While the warfare is terrible and costly, the scenes of men arrayed in armor with huge pennants swaying over them are stirring to say the least. It makes a small part of me want to see films like Shichinin no Samurai in color just for the incredible spectacle.

One thing Kurosawa does that Shakespeare didn’t is he gives his old warlord a backstory. Hidetora Ichimonji was not noted for his benevolence. In fact, throughout the film we are reminded of exactly how brutal his push to power was. He murdered and slaughtered his way up the ladder, forcing the children of those he killed into marriages with his own clan to further strengthen his position, and otherwise destroying those who he could not marry into his family. His reputation for brutality, bloodshed, and treachery comes back on him through the course of the film, serving as a lesson in bloody, terrible karma.

Ran is not a happy film by any stretch. Nothing good happens to anyone in this film, but it probably shouldn’t. I don’t know if it’s my favorite Kurosawa film--Rashomon seems to be still battling Kumonosu Jo for that title—but Ran is Kurosawa showing that he still had the ability to stir emotions and excite the senses when most of his contemporaries and those following him believed that the world of cinema had passed him by. This film is magnificent and I do not in any way question its location here.

Why to watch Ran: Kurosawa’s final samurai epic, and it’s blood-soaked enough for two films.
Why not to watch: It’s also a constant reminder of one’s own mortality.
Posted by SJHoneywell at 7:26 PM