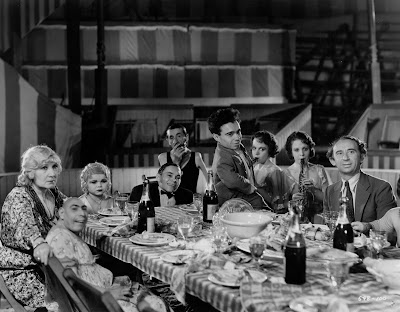 I love a good horror movie, but I don’t always have the strongest of stomachs, which is something of a quandary. Medical stuff really bothers me intensely. I have a tendency to recoil from witnessing medical procedures, needles, and similar things. Human physical oddities cause me to react in much the same way, which makes it very strange indeed that I really like Tod Browning’s Freaks.

Freaks is not the earliest film designed to shock its viewers, but as far as I know, it’s one of the first with no other real purpose in mind. Films like Un Chien Andalou were as much artistic statements as films with an eye toward making people rear back in horror. Freaks, though, is all about that gasp of shock and fear.

The story is a simple one, and told in the past tense around the “home” of a circus freak. We are told by the sideshow barker that the freak in question was once a beautiful woman who had an act as a trapeze artist, and we then see the story in question.

Cleopatra (Olga Baclanova) is the woman in question, a great beauty of the circus world. She is adored from afar by Hans (Harry Earles), a midget, who is seriously one of the smallest human beings ever to live. Frieda (Daisy Earles, actually Harry Earles’s sister in real life), of an equal stature with Hans, is engaged to Hans despite his obsession with Cleopatra.

Love seems to be in the air at the circus—the strongman Hercules (Henry Victor) has booted animal trainer Venus (Leila Hyams) out of his trailer; she encounters the clown Phroso (Wallace Ford), who shows some interest in her. Another clown named Roscoe (Roscoe Ates) with a stuttering problem is marrying one half of the conjoined twins (Daisy and Violet Hilton). Hercules invites himself into Cleopatra’s trailer, and the two become a private item, although there’s quite a bit of suspicion among the freaks.

Cleopatra plays up Hans’s obsession with her, and she decides that she’s more than a little interested in him when it turns out that Hans has come into a good deal of money. He reneges on his engagement with Frieda and proposes to Cleopatra. She agrees, hoping to marry him, kill him, and get his money, which she’ll use to run away with Hercules. The freaks (and there are many—a bearded lady, a human skeleton, a bird woman, an couple of armless women, some pinheads, a guy who’s body stops mid-torso, and a guy with no arms or legs, and at least two other midgets) start to realize that something is amiss when the attempt to bring Cleopatra into the their fold and she rejects them. This scene is perhaps the most famous in the film. One of the midgets (Angelo Rossitto) starts a chant and pours booze into a large loving cup. As the freaks chant “Gooble gobble, we accept her, one of us, one of us” each one drinks in turn from the cup until they offer it to Cleopatra herself. She screams, calls them freaks, and throws the booze on the poor circus performers.

Cleopatra goes ahead with her plot to poison her diminutive husband, and then comes the revenge of the freaks in one of the weirdest and most disturbing scenes ever filmed. There is something horrible about seeing a man with no arms and no legs crawling forward with a knife in his teeth that spins my guts. And then I think about it for a second, and I wonder how he’s going to use that knife if he manages to catch up with someone.

Browning endured a lot of criticism in making this film because he used actual circus freaks for many of the roles—the freaks here are not make up, but actual circus performers. For what it’s worth, it’s pretty evident that many of the performers in this film are not actual actors. It’s pretty poorly acted in general, although the non-actors certainly try their best. It’s a bit hard to watch in that sense.

And yet, there is something really compelling about this movie. It’s such a lurid tale and so luridly told that it almost forces itself to be watched. Freaks is not a great movie by any measure, but it is absolutely a film that needs to be watched for how strange it is. This film is so creepy and wrong, so horribly twisted, that it plays out like a train wreck. It’s awful to see, but you can’t look away from it. This is especially true of the confrontation of Cleopatra and the freaks.

Freaks is a hard movie to classify. I’m calling it horror because it’s no comedy and it’s too strange to be a drama. It’s not traditional horror in any sense of the word, but a deeper sort of horror, the sort that required a twisted mind like Browning’s to create.

Why to watch Freaks: Mainstream shock cinema in its earliest form.
Why not to watch: If you are squicked out by circus freaks, prepare for an hour or more of severe squicking.
Posted by SJHoneywell at 7:14 PM