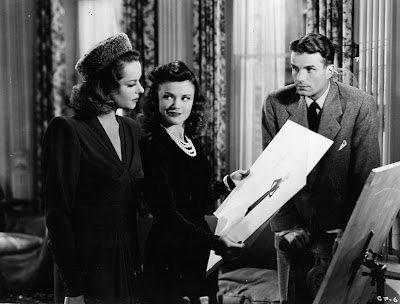 Movies that were produced by Val Lewton have particular things in common. Most of them deal with the strange or the creepy. Many would be classified as horror films. And none of them really have a huge scare factor. They remind me quite a bit like long episodes of The Twilight Zone. None of them is so Rod Serling-y as Cat People.

Irena Dubrovna (Simone Simon) is a Serbian who has moved to the States. While practicing drawing at the zoo, specifically around the panther cage, she encounters a man named Oliver Reed (Kent Smith). The two hit it off and retire to her nearby apartment where they get a little better acquainted (and not like that). What catches Oliver’s eye is a statue of the Serbian King John. Irena tells him of the story of her village. They had been ruled by invaders for years, and the village had turned to evil and Satanic worship. King John killed most of the evil peasants, but those who were the most evil, according to Irena, hid. These people had the power to turn into great cats when their passions became aroused.

The pair go through a very quick courtship and are married, but the marriage is unconsummated because Irena is convinced that she bears the curse of her village. Any intense emotion, any intense physical contact—like sex---will turn her into a panther and she’ll rip him apart. In fact, she won’t even kiss him.

Eventually, they decide that it’s time for Irena to get some psychiatric help. On the advice of Oliver’s office mate Alice (Jane Randolph), she sees Doctor Louis Judd (Tom Conway). She’s disturbed by the visit, and even more disturbed by the fact that Alice knows about the problem. She starts avoiding her psychiatric visits, and continues to avoid physical contact with Oliver. Things start to get complicated on a couple of fronts. First, Alice expresses her true feelings for Oliver. Second, Oliver (I imagine thanks to the lack of sex) is starting to have second thoughts about the marriage. Third, and most critically, Dr. Judd seems to have developed an unhealthy obsession with Irena, seeming to think that sexing her up might be the way to cure her.

Make no mistakes here--Cat People is all about sex, even if it’s never explicitly spoken out loud. It’s also about intimacy and fear of the same. Were I the type to expound on the deep-seating meanings of films (and I am sometimes), I might suggest that this film is in its way horribly misogynist, attributing this sort of terrible otherworldly and demonic power to women when it comes to sex. And maybe that does underlie the story here, but that doesn’t really matter to me that much.

Where this movie really works is in its atmosphere. Like many a truly great horror movie, we see almost nothing. Everything scary and shocking is implied, done with shadow and sound instead of showing us what we think is happening. For instance, one evening Oliver goes back to work, and through a series of events has a cup of coffee with Alice at a local eatery. Irena sees them together, and then follows Alice home. Part way through the walk home, Alice notices that she is being stalked, like prey. All we get are some moving bushes. Just after this, some sheep in the nearby zoo are slaughtered. The footprints leading away start as the prints of a large cat, and then turn into a woman’s shoes…and we pan up to Irena.

There are several scenes like this one, the most famous being in the swimming pool of Alice’s apartment building. As each of these scenes plays out, it becomes more and more evident that Irena’s delusion isn’t really a delusion at all, and that her curse is a real one.

While Cat People has a few good jump scares, this isn’t really a scary movie. It’s much more a thriller than anything else. This is par for the course with a Lewton-produced film like this one. Lewton’s films never really went for the gore or for the shock. His goal seemed always to be to get the audience to think, and through thinking realize a much greater level of horror than a simple scare or gross out.

Cat People achieves this. It’s rightfully considered the best picture Lewton was attached to, and for very good reason. It also happens to be his first, so his career started off with quite a bang.

But Lewton only produced this film; he didn’t direct it. Jacques Tourneur was the man behind the camera for this film, and it is directed beautifully. In each scene we see exactly enough to know exactly what Tourneur wants us to know. This is a film that would not be improved in color—black and white suits it perfectly, and might even improve it.

Simone Simon is quite charming. She plays a great deal of this film as a damsel in real distress over what she thinks (and evidently is really experiencing) is a terrible curse upon her. However, when the moments call for it, such as in the swimming pool scene, she plays the role with a touch of glee and a larger touch of menace. There’s something truly wicked about Irena, and Simon seems to really delight in that aspect of the character.

All in all, this is a classic for a reason. Avoid the not-as-good remake unless the story really intrigues you.

Why to watch Cat People: Old style creepiness.
Why not to watch: Fewer scares than you might want.
Posted by SJHoneywell at 11:51 PM