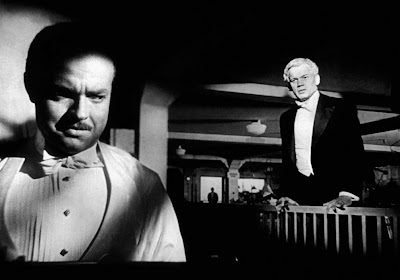 For all the hoopla that surrounds it, Citizen Kane has a very strange reputation. It has been hailed by the American Film Institute as the greatest film ever made, a distinction the AFI has given Citizen Kane more than once. On the other hand, I can’t tell you the number of people who tell me how much they dislike the film, or find it boring and a waste of time. My conclusion of these differing opinions? The AFI knows in general what it’s talking about, and a lot of people have crappy taste and are really, really stupid.

This is the first film done by Orson Welles, and it’s one hell of a debut. It’s essentially a character study rather than focusing on a plot. We start with the death of our title character, media tycoon and former political candidate Charles Foster Kane (Welles). He dies uttering the single word “Rosebud,” creating a mystery. No one, it seems, knows who or what “Rosebud” is or was.

The task of discovering the truth behind the word falls to a reporter named Thompson (William Alland). He interviews a number of people who knew Kane or who worked with Kane in an attempt to come to the truth of the word, and ends up discovering instead the story of the man’s life. Thus, the entire film is told in flashback through the memories of those who knew him.

Kane gained his fortune by accident; a boarder at his parent’s boarding house left the deed to an allegedly played-out mine which turned out to be filled with gold. His mother (Agnes Moorehead) puts the young Charles in the care of Thatcher (George Coulouris). Charles takes an immediate and intense dislike to Thatcher, something that continues throughout the rest of the film.

Upon his graduation, Kane decides to take over the running of a newspaper that is a part of his holdings, and he uses it to attack big businesses and (at least in his own mind) assist the common working people. Helping him do this are his friends Mr. Bernstein (Everett Sloane, and we never to learn Bernstein’s first name) and Jedediah Leland (Joseph Cotten). Kane uses his money and influence to hire away the best writers from other papers and push his own circulation to the top of the charts, using this platform to influence public policy and national events. He also begins collecting art treasures from around the world and, on a trip to Europe, finds himself engaged to Emily (Ruth Warrick), who also happens to be the niece of the sitting president.

Eventually, buoyed by his wealth, fame, and success, Kane runs for governor, but is caught in a compromising position with a young “singer” named Susan Alexander (Dorothy Comingore). He loses the election, is divorced by Emily, and marries Susan with the intent on turning her into a great opera singer. The plan backfires mainly because of her complete lack of talent, and when she can take the catcalls and boos no longer, she attempts suicide. With this, Kane builds a huge fortress called Xanadu for her, and the two become completely isolated.

However, Susan doesn’t want isolation; she wants nightlife, and after a few fights, she too leaves the great man, leaving him in his crumbling palace with his crumbling media empire around him to die alone, bringing us back to the beginning of the film. The people in the film never do discover what “Rosebud” is, although we in the audience do. You’ve either seen this or know it already, or don’t want it spoiled, so I won’t spoil it. Suffice to say that “Rosebud” actually does tie up a great deal of information about who Kane was and what he really wanted from life.

The noteworthy thing about Citizen Kane is everything about Citizen Kane. It enjoys one of the greatest scripts ever penned, with some genuinely insightful and marvelous lines. There is a moment, for instance, when Bernstein comments to the reporter that “Rosebud” might be a woman. The reporter demurs, but Bernstein insists that he can still remember a girl he saw for just a second on a ferry decades ago. It’s a great image.

My favorite character in the film is Jed Leland, particularly the older version in the nursing home. He’s an irascible old coot, calling Kane’s palace “Sloppy Joe’s” and repeatedly asking the reporter to find a way to slip him in some cigars without the doctor knowing. He’s a great character—funny, irreverent, and honest in a way that only the old without anything to lose can be. Susan Alexander Kane is far more poignant, having slipped deeply into alcoholism after her divorce from Kane.

But more than the script and the great characters, this is a tremendous film to watch simply for the technical aspects of film. Welles may have been working on his first movie, but he shows that he as a flair for the dramatic and the subtle. Powerful characters like Kane are almost always filmed from below, making them towering presences in the film, while the weaker characters like Susan are virtually always shot from above, making them look more vulnerable. Light and shadow are used brilliantly, and the make-up work is consistently excellent—Welles looks his age in the early scenes and truly looks old instead of under heavy cosmetics in the later scenes.

It’s nearly impossible to discuss this movie without at least mentioning William Randolph Hearst, since the film acts as a sort of unofficial biography of the publishing magnate. Hearst did his best to quash the film, and in fact no Hearst publication reviewed the movie until about forty years after the film’s release. Hearst was unsuccessful in stopping the movie from release, which is all to the good. Citizen Kane is a true work of cinematic art.

I understand why people dislike this film. The plot, such as it is, is about a single man and the life he lived. It’s an intense, warts-and-all character study with no real action. But it is staggering, a monumental achievement. It’s not my favorite film, but it is one that I never tire of watching, and while I like many other movies more than this one, I can’t argue with the thoughts that put this as the greatest achievement ever made in film.

As a final note, it’s worth seeking out the fictionalized making-of film RKO 281, which was the production number for Kane.

Why to watch Citizen Kane: The greatest film ever made according to a great many people.
Why not to watch: You’re one of those people who won’t watch a film more than 10 years old and are thus an idiot.
Posted by SJHoneywell at 8:59 PM