Heart of Gold, Head of Tin

In any group of experts and wannabee-experts, someone will dislike any given classic. I learned this as an undergraduate English major. Name any canonical author or book, and there’s someone who hates it. Shakespeare’s classic Othello was once summed up along the lines of “wives should mind their hand linens.” Haters gotta hate. I’m not immune to this. There are parts of The Canon that I dislike and don’t want anything to do with. The only way I survived reading Emily Dickinson’s poetry was the realization that almost everything she did was in ballad form, and could thus be sung to the Gilligan’s Island theme or “House of the Rising Sun.” 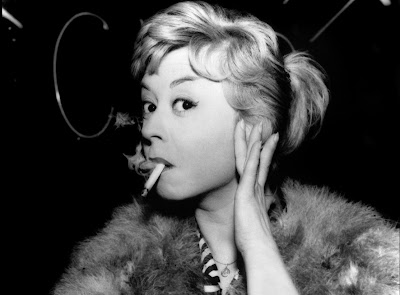 When it comes to directors, I can hang with anyone, but I’m pretty ambivalent on Fellini. That feels like saying I’ve watched too much Hitchcock or that Kubrick doesn’t do anything for me. Fellini sits on a high pedestal when it comes to film geek wankery, but so far, I’ve come away unimpressed. Amarcord was interesting to a point, but essentially little more than cotton candy, and Satyricon was flat out weird and made me uncomfortable in spots. So I watched Le Notti di Cabiria (Nights of Cabiria) more to say that I’d done it than with any sort of expectation or joy.

Le Notti di Cabiria is the story of a prostitute named Maria Ceccarelli (Giulietta Masina), nicknamed “Cabiria.” She is a prostitute who works the streets of Rome. Despite what she does to make a buck, Cabiria is remarkably naïve. It’s almost painful to see how easily she is duped by those around her. In the opening sequence, she stands on the bank of a river with her boyfriend. When she least expects it, he pushes her into the river and runs away with her purse. Unfortunately, Cabiria can’t swim, and has to be rescued by some people who simply happened to be there.

While a true naïve, Cabiria is also aggressively proud of herself for owning her own house. She uses this fact to differentiate herself from the other prostitutes on and nearby the street corner. It’s not much of a house, of course, but it is a house. At times it seems like Cabiria has little else. Nothing good seems to happen to her. Her dunking in the river is really just the start. And yet, soon enough, Cabiria is willing to look at the world through rose-colored glasses once again.

We follow Cabiria around, see her petty jealousies and feuds, and then witness her pulled up on stage by a magician and hypnotist. While mesmerized, she is told that a young man named Oscar is there, and that he loves her and wishes to marry her. She’s eventually awoken from the trance to the jeers and cheers of the audience. Cabiria is proud, and hates being laughed at, so she sulks backstage until the people in the audience have left. But one man, Oscar D’Onofrio (Francois Perier) claims to have been touched by her innocence, and a romance blooms.

But, you should know where this is going. Nothing good happens to Cabiria. Everything that might possibly make her happy will come back and bite her. Oscar is not a nice guy, after all.

In that sense, Le Notti di Cabiria is a tragedy, but it’s impossible to call this film a real tragedy. The reason is that while Cabiria reacts in extreme ways to what happens to her, nothing does much more than temporarily set her mood back. After each terrible knock, each crushing disappointment, she is back to her old self, cheerful and looking on the world as something special to be enjoyed rather than a terrible, crushing prison. She is that rare naïve person who remains naïve regardless of the terrible things that happen to her.

There is something beautiful here. It’s not the film, and it’s not Giulietta Masina, but it is the attitude of Cabiria. There is something really beautiful about an attitude that continues to believe in the goodness of people and the joy of life moments after taking yet another kick to the face.

Why to watch Le Notti di Cabiria: Our heroine has a true heart of gold.
Why not to watch: She also has a head made of tin and spun wire.
Posted by SJHoneywell at 11:54 PM