Mutilation for Fun and Profit 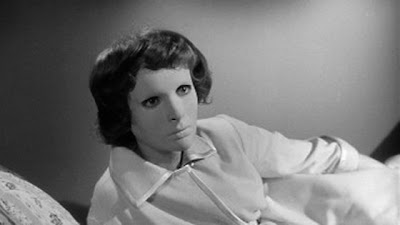 Evidently, I’m on a kick for the weird, disturbing, and upsetting the past few days, since of all the films I had available to me, this is the one that caught my attention. Georges Franju’s Les Yeux sans Visage (Eyes Without a Face, also released as The Horror Chamber of Dr. Faustus) is another in the series of films that was released to some cries of revulsion and critical derision only to be rediscovered years later as a masterpiece of its genre. In many ways, the film is reminiscent of Peeping Tom of the following year. However, where Peeping Tom was upsetting in its implications and desire to make a sympathetic serial killer, Les Yeux sans Visage goes right for the gag reflex.

We start with Louise (Alida Valli) driving through the countryside with what appears to be a body in the back of the car. As it turns out, it is a body, and she tosses it into a river. The body is identified by Dr. Genessier (Pierre Brasseur) as that of his missing daughter. The main point of identification is the essential lack of a face on the body; Christiane had been horribly mangled in a car accident caused by Genessier.

Of course, if that were the film, we’d be done in a couple of minutes and be pretty disappointed in the whole thing. Christiane (Edith Scob) is still alive and living in Genessier’s villa. Because of her terrible disfigurement, she is forced to wear a mask over her terrible scars. Only her eyes are visible. The mask itself is a plain, white, featureless thing. Genessier is an expert in transplantation surgery. His goal is to find a way to restore Christiane’s beauty to her.

Assuming you are even relatively astute, you should be able to put two and two together at this point. You have a horribly scarred woman, a father intent on restoring her face to her, and a horribly mangled corpse. Guess what’s been happening. If you guessed that Genessier is kidnapping young women, peeling off their faces, and grafting them onto his daughter, you win! Let’s let that sink in for just a second before we continue, shall we?

We learn early on that Genessier is a bit of the doctoral stereotype—he possesses the powers of life and death and thus everyone else needs to stay out of his way as much as possible. There is a not-so-subtle arrogance that drips from him every time he is on the screen. When he identifies the body of “Christiane,” for instance, he is forced to deal with the actual father of the dead girl, but is not just unable to comfort the man, but is completely unwilling to have anything to do with him. There is no compassion or empathy in Genessier, only a great desire to have things as he believes they should be.

We don’t see the mask until a good 25 minutes or so into the film. Just before we do, we hear Christiane say that her face terrifies her, but the mask frightens her more. It’s with reason. The mask is a featureless thing, a plain white slate, and it’s terrifying for the same reason Michael Myers or the killer in Alice Sweet Alice is scary. It’s just a baby step past the brink of the uncanny valley. She’s too human to be anything but human, but just inhuman enough to be completely terrifying. And yet, as the eyes are the window to the soul, Scob is capable of great emotion and pathos behind the terrible mask.

What I find so interesting here is how similar this movie is to so many other, lesser films. There is a particular old-school horror sub-genre of a mad scientist working in a basement lab to further some medical procedure, often for the sake of a loved one. Mystery Science Theater 3000 was rife with films like The Brain that Wouldn’t Die and The Unearthly and The Corpse Vanishes that had plots running very much along the same lines as this film. While those films were played for cheap thrills and minor shocks, this one takes itself quite seriously.

One major difference between this film and the others of the genre is that this film does not spare any of the gruesome details. We get the full on surgery sequence, and it takes several minutes for Genessier to remove the face of one of his victims. It’s also quite horrifying. Okay, we’ve seen it again in films like Face/Off and some of Rob Zombie’s output, but this is still quite disturbing and awful, and the effects are really quite good. I had a hard time with this sequence, in part because of how clinical it is rather than despite it.

Another interesting thing here is that it’s difficult to understand Christiane’s moral position throughout the procedures. While she protests that she doesn’t want to go through these medical indignities any more (one imagines that having new faces grafted on every few weeks would be something of a drag), she also doesn’t free the poor girl whose face is removed in the middle of the film. Similarly, while a great deal of what Genessier does in this film is terrible and evil, it’s also evident that he is conflicted by it and suffers for it. He is driven to save his daughter, but knows that the price he pays to do it is a terrible one.

Make no mistake here—Georges Franju made a shock film, but he made a really, really good and artistic shock film. This is not cheap filmmaking that is designed only to gross people out or make them run from the theater—this is the Shakespeare of mad scientist gross out films. It’s a movie of surprising depth with vivid and deep characters—not something one expects from a film that otherwise seems to be the sort of thing played in old drive-ins. In fact, there’s a great deal that I’ve left out of this write-up simply for space, like the doctor’s dogs, Louise’s obvious obsession with the doctor, and Christiane’s fiancé. I see I've also forgotten the fact that most of the music sounds like it belongs in a carnival--a truly creepy addition to this film. A lot happens in 90 minutes. I can’t say I look forward to seeing it again, but I understand the reason that so many people find this film compelling and necessary.

Why to watch Les Yeux sans Visage: A tale of love, terror, horror, and hubris all brilliantly told.
Why not to watch: It kicks the gag reflex into overdrive.
Posted by SJHoneywell at 11:37 PM