Let’s get this out of the way right away: my mother knew Jean Seberg. I don’t mean that she once met her—Mom knew her. Before she was cast in Otto Preminger’s Saint Joan Jean Seberg was just an ordinary Iowa girl attending the University of Iowa. She and my mother pledged the same sorority and were evidently consecutive alphabetically (Mom’s maiden name was Skidmore). There’s quite a bit more to the story than that, but it’s enough for this blog (if you want the full story, send your browser here: Finding Jean). 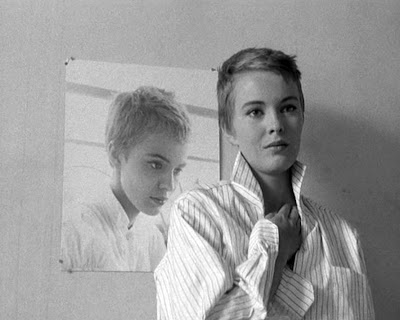 Saint Joan tanked, and Seberg’s next couple of films didn’t do a lot better. It wasn’t until Jean-Luc Godard cast her in A Bout de Souffle (Breathless) that she got any respect from the critics. As it turns out, A Bout de Souffle was not just her breakthrough film, but also that of Godard and of her co-star Jean-Paul Belmondo. This film put all three on the map.

The story is a simple one, almost a film noir. Michel (Belmondo) is a car thief. He earns his living by stealing cars and driving them to Paris where he sells them off. While driving his current prize from Marseilles, he’s spotted by the police. Michel avoids the police by turning off the main road, but one motorcycle cop tails him. To avoid capture, Michel shoots the cop and flees.

Back in Paris, Michel encounters Patricia (Seberg), an American who makes her living selling the New York Herald Tribune even though she really wants to be a reporter. She and Michel know each other, and Michel decides that he likes her. Plus, he needs a place to hide out from the police, and Patricia’s hotel room seems like a good spot to stay. He’d really like to go to Rome as a way out of France and away from the manhunt, and he’d really like her to go with him.

And so he stays with her, depending on both her kindness and her relative ambivalence about committing to anything with him—even straight up sex. The sex between them has happened in the past—she claims to be pregnant with his child. He also admits to her what he does for money, or at least some of what he does for money, and tells her that running away to Rome is his chance to get away from the pressures on him. Patricia is tempted, but also is wracked by the guilt of harboring a fugitive, and must decide whether or not to run away with Michel or turn him in. And that’s really it.

A Bout de Souffle is considered one of the great films of the French New Wave. The main reason for this is Godard’s invention of the jump cut. According to the story, his original edit of the film was too long. Rather than cut entire scenes, he cut bits and pieces from scenes, giving a number of the sequences a disjointed, jumpy feel while still maintaining the overall integrity of the scene. We’re a little more used the concept of the jump cut today, of course, but this was a revelation. It gives the film, which is now more than 50 years old, a particularly modern feel.

Another modern element of the film is the frankness of the discussion about sex. It’s not treated as a taboo subject, but discussed openly. Michel at one point asks Patricia how many men she’s slept with and openly propositions her on the street and comments on her lack of bra. It’s almost overdone. Michel talks about sex incessantly to the point where it’s almost embarrassing. And yet, we see nothing—the actual sex is implied. Michel and Patricia lie in bed and both disappear under the covers, and then she gets up wearing his shirt. For a film that’s so blatantly sexual in its content, it’s remarkably prudish in some ways.

Knowing that, at least in familial legend, Jean Seberg was nearly my mother, it’s mildly uncomfortable seeing her in sexual situations. And yet I can also easily see why my father had been infatuated with her when seeing her on the University of Iowa campus. She’s hardly a stunning beauty, but there is an elfin quality to her. She’s perky and cute if not glamorous. She also speaks French with a terrible American accent. My own French is pretty bad, but I could tell that her pronunciation of many words and phrases was distinctly American.

Belmondo seems to spend the entire film smoking. I don’t know if there is a single scene in which he doesn’t have a cigarette dangling from his lips. I can’t tell if this adds to his overall cool or detracts from it. Even in the scenes in which he doesn’t appear, such as the press conference Patricia attends with a novelist named Parvulesco (Jean-Pierre Melville), I like to imagine him dragging on his constant smoke.

A Bout de Souffle does little to advance the world of cinema in terms of plot. It’s influence is felt instead on the very language of cinema, adding new weapons in the repertoire of filmmakers. For a film with such a small story with surprisingly few twists and turns, it is remarkably watchable, and holds up very well.

Why to watch A Bout de Souffle: Godard’s coming out party.
Why not to watch: All of the men wear really short neckties. It looks really strange.
Posted by SJHoneywell at 11:20 PM