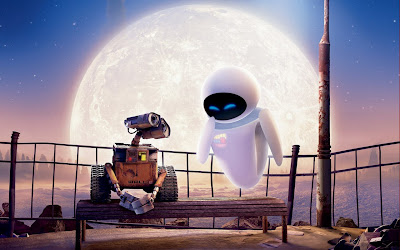 Say what you will about Pixar, they aren’t afraid to take chances. This is a company that made a kids movie about monsters in the closet, people who created an engaging story about a sewer rat living in a restaurant, and a children’s fable about a cranky old man. It seems like the folks at Pixar go out of their way to craft stories about the most unusual, non-kid-film characters they can think of. WALL-E pushes that envelope about as hard as Pixar can push it, and the fact that Pixar pulls it off is nothing less than amazing.

In a future world, the Earth has become so covered in garbage and trash that it is no longer fit for human habitation. The humans all leave to journey out in space for a few years while the planet is reconditioned by hordes of little garbage compacting robots called WALL-Es (Waste Allocation Load Lifter-Earth class). The clean up is originally estimated at five years, but it takes quite a bit longer. In fact, as the movie opens, there is only a single WALL-E left functional on Earth.

Having worked around the refuse of Earth for so long, and now completely isolated, WALL-E has developed something of a personality. He has a penchant for old musicals and likes to collect interesting items that he finds in his wanderings. WALL-E continues to compact garbage, making massive towers of waste material, but also puts his more interesting finds into an old cooler that the takes back to his home every day. He collects anything that strikes his fancy—Rubik’s cubes, old lighters, a bra, a hubcap.

Everything changes for WALL-E with the arrival of EVE (Extraterrestrial Vegetation Examiner) from the human ships still in orbit. While it’s not immediately evident what EVE wants, she appears to be searching for something. Alone for so long, WALL-E is immediately smitten with this sleek new robot, and he does everything he can to gain her attention.

Eventually, after taking a couple of high-powered explosive shots at him, EVE figures out that she can trust the little yellow robot. He tries everything he can to impress her, and finally does when he presents her with a growing plant. EVE shuts down when this happens, and is eventually taken back to space to trigger the recolonization of Earth by the generations still alive. These generations, with 700 years in space of pampering and massive bone density loss, have their own problems to deal with, including a ship’s computer that would rather keep the people in space.

WALL-E is amazing not because of or even in spite of the characters. What is truly astonishing here is that there is virtually no dialogue through most of the film. Only the people on the giant spaceship really have much to say—WALL-E doesn’t say much beyond his own name and “EEE-vuh,” which is about the amount of dialogue that EVE has. And yet, while our only other character for the first half hour or more of the film is a cockroach, there is not a single dull moment.

The second half of the film, with WALL-E trying to find and then rescue EVE, and EVE trying to find and rescue WALL-E is not nearly as entertaining as the scenes with WALL-E exploring the remains of civilization on Earth or the rather tender scenes in which he tries to impress EVE with his collection of junk. It’s not that the second part of the film is bad, but it loses a great deal of the innocence and sweetness of the film’s opening.

I very much expected to like WALL-E, this being another film that was built up in my mind before I watched it. I knew my kids liked it, which is why I purchased a copy for them the other day—it took them less than 48 hours to break it out and watch. Sadly, though, I’m not sure it hits my top tier of Pixar films. It’s better than several, not nearly as good as at least three of the Pixars I’ve seen (I still haven’t seen all of Toy Story 3 or Up). I really wanted this to rank with The Incredibles, Monsters Inc., and Toy Story. Instead, it comes in a little south of Ratatouille.

The first part of WALL-E is irrepressibly cute, but never cutesy. In the second half, we’re hit with message-message-message in terms of both environmentalism and the tendency for people to be fat and lazy. Good messages to put in front of kids, no doubt, but there were moments when it felt like I was getting hammered with them.

The film also makes some interesting comments about gender, probably without meaning to. WALL-E is male; EVE is female. How do we know? We simply do, but part of the reason is because of some subtle stereotyping. WALL-E is boxy and angular while EVE is curved with no angles. WALL-E is dirty and unkempt; EVE is clean and shiny. It's a nice touch that here EVE is the savior of humanity and the world. Still, is it a mistake that WALL-E is cute and cuddly and comfortable (and male) and EVE is sleek, pretty, and somewhat terrifying (and female)? I'm certain much of this is not intentional, or happened because such stereotypes are fully ingrained in us. And it's worth noting that in contrast to these stereotypes, EVE is also smarter and better with technology than her male counterpart. Unintentional almost certainly, but it's definitely there.

In short, WALL-E is good, maybe even great, but Pixar has been better. It’s still a better film than about 95% of “family” films ever made.

Why to watch WALL-E: It’s 100 times better than you imagine a movie about a garbage robot could be.
Why not to watch: The cuteness will make your eyeballs melt.
Posted by SJHoneywell at 3:24 PM