Toys Not Yet in the Attic 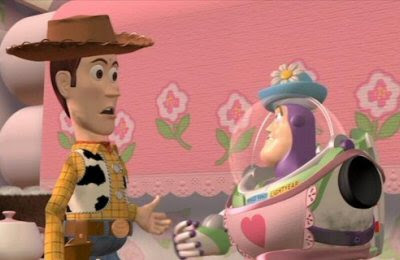 If you have kids, you know Pixar. They’ve been releasing movies for 16 years, and while a few have been on the lower end of the scale, Pixar’s scale is pretty high. A weaker Pixar film like A Bug’s Life or Cars is still better than most of the animated films made for kids. Pixar’s reign of awesome (which to my mind peaked with The Incredibles) started in 1995 with Toy Story. What a happy surprise when Kid #2 came home from the library with a copy in tow.

I have to admit that I had never seen Toy Story before. In my defense, the movie came out three years before I had children. The story is based on the notion that when we aren’t looking, toys come to life and actually have real lives. Our focus initially is a cowboy doll (sorry, action figure) named Woody (Tom Hanks), who is the favorite toy of a young boy named Andy (John Morris). It’s Andy’s birthday, and all of his toys are concerned about what might be arriving as gifts, pushing each of the older toys a step further down on the favorite list. These include a piggy bank (Pixar staple John Ratzenberger), a Little Bo Peep doll (Annie Potts), a Slinky dog (Jim Varney), a Mr. Potato Head (Don Rickles), a tyrannosaurus (Wallace Shawn), and plastic army men (R. Lee Ermy).

The big present is the latest toy, a Buzz Lightyear action figure. Eventually, Buzz (Tim Allen) makes his way up into Andy’s room, and it seems that he is the one to rule the roost of the toys. The problem is that he doesn’t think he’s a toy, but a real person trapped on a strange, alien world.

What evolves is a story initially about trying to get Buzz to realize he’s a toy. This quickly morphs into a story of jealousy and revenge, as Woody plots to get rid of the new guy. The easiest way to do that, he determines, is to get Buzz hidden, since Andy’s family is moving in a couple of days. Of course, his plan is successful, and of course he immediately regrets his actions and must save Buzz.

The adventure that follows is quite kid-friendly, exciting throughout with some toy-sized dangers, mostly in the person of Sid (Erik von Detten), the neighborhood toy-destroying kid. Throughout their adventure, Buzz learns to accept the fact that he is a toy and the two learn to like each other, and even act selflessly to rescue each other multiple times.

To be honest, the story here isn’t really very original, but it doesn’t have to be. This doesn’t mean that kids are less sophisticated than adults, but they’ve seen a lot fewer plots than adults have. And, while the plot is relatively simple, it’s done pitch-perfect, making it a pleasure to watch for the however-manyeth time.

One thing that is greatly appreciated is that this film is almost devoid of adult-oriented humor. More and more, “family” films are filled with jokes that are inappropriate for children but that normally won’t be picked up by them. My guess is that the filmmakers do this as a way to give the adults in the audience something to laugh at. Toy Story manages to avoid taking this cheap road out by making a movie that is entertaining on its face.

So why does this film show up on The List? Beyond the fact that it’s a highly entertaining movie for virtually any age? Well, it’s also the first completely computer-generated film ever made. It set a high standard for animation that has continually been surpassed, often by Pixar itself.

Toy Story is a wonder, and is entirely entertaining start to finish. In my opinion, Pixar got better with films like Monsters, Inc. and The Incredibles, but they started out far and away better than anyone else in the genre.

Why to watch Toy Story: A kids’ movie that is equally entertaining for adults.
Why not to watch: You never had toys this cool.
Posted by SJHoneywell at 7:35 PM