Film: The Shining
Format: Streaming video from NetFlix on laptop. 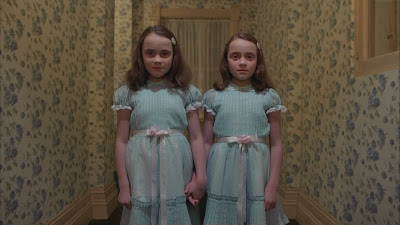 Since The Shining has become such a major part of film culture, you’ve either seen the film or you know enough about it that you can follow along without much of a plot summary. I’ll keep this short and sweet. An aspiring writer agrees to be the caretaker of a large resort in the middle of nowhere over the winter. He and his wife and son go there. We discover that bad things have happened at this hotel and have left a sort of make-you-go-crazy residue that makes the guy go homicidal when the place is completely cut off from civilization. Oh, and the boy has some sort of ESP. Weird shit happens. A lot.

What sets The Shining apart from other horror films isn’t that it strives for and achieves all three of King’s levels of horror. It’s that it goes somewhere else entirely. The film is absolutely saturated with a deep sense of wrongness. It contains so many things that are not completely opposite reality, but are just different enough to be truly disturbing, mind-searingly, horribly disturbing.

We find out early about the past of the Overlook Hotel when the new caretaker, Jack Torrance (Jack Nicholson), is told of a winter caretaker in the past named Grady. Grady got a bad case of cabin fever and took an axe to his wife and daughters, then blew his own head off. We also learn that the Overlook as built on an Indian burial ground, and if the movies have taught us anything, it’s that building on top of any sort of old cemetery is a really bad idea.

Nicholson’s performance is sort of the ultimate Jack Nicholson performance—it’s One Flew Over the Cuckoo’s Nest and Batman and a few more besides. He slips into the insanity so naturally that he’s much further gone than we think by the time we realize he’s gone insane.

While Nicholson’s performance is a great one, it is Shelley Duvall who steals the film as Jack’s wife Wendy. As Jack starts to slip more and more into his insanity, Wendy becomes more and more terrified of him, and Shelley Duvall has a natural deer in the headlights look to her, a terrified expression she does so well that it’s impossible to believe that she isn’t on the edge of simply falling apart for about the entire second half of the film.

The other character we spend a lot of time with is the son, Danny (Danny Lloyd). Danny knows things and has premonitions of the future. These come out through his imaginary friend, Tony, who speaks through Danny’s finger in a disturbing, creaky voice. It becomes almost immediately evident to us in the audience that Danny really can tell the future and sees things that others don’t. We get this confirmed when we meet Dick Hallorann (Scatman Crothers) at the Overlook. Dick has a bit of the “shine” to him as well and can speak with Danny mentally. Danny spends a lot of his time riding a trike through the halls of the hotel and encountering a number of disturbing ghosts, particularly the two little murdered girls, who are absolutely terrifying.

The most famous scene in the film is Jack hacking through the door of the bathroom with a fire axe, leaning in, and saying, “Here’s Johnny!” While a great scene, and one that has been referenced and parodied for the last 30 years, it is not the scariest moment of the film. This comes when Wendy, looking for Jack, gets a look at the novel he’s been working on for the past few months. As it turns out, it’s nothing more than the phrase “All work and no play makes Jack a dull boy” over and over in a variety of patterns. As she flips through page after page, seeing the same words over and over, she finally realizes the level of Jack’s psychosis. The look of despair on her face in this moment is so real, it’s almost impossible to believe that she is acting and not truly experiencing the emotion herself.

That’s what makes this film work throughout, the sense of things just being wrong. Near the end, Wendy tries to leave the hotel and runs into a series of ghosts or spirits or visions, many of which are actually more disturbing than something horrible, bloody, or dead. In particular, she finds a man in some awful bunny/bear suit performing some sort of sexual act on another man—we see nothing, but the two men stop and simply stare at her until she flees in terror.

For what it’s worth, The Shining is different from King’s novel in a number of significant ways. It’s a completely different vision, and much of the source material is simply not here because Kubrick didn’t have the room for it. I honestly don’t miss it. The Shining is a film that stays with the viewer for a long time because of its strange and horrible otherworldly evil quality. This is not a film to take lightly or to watch on a whim. But it’s absolutely a film that belongs in this list.

Why to watch The Shining: It’s genuinely and deeply scary.
Why not to watch: It’s nightmare fuel.
Posted by SJHoneywell at 11:56 PM