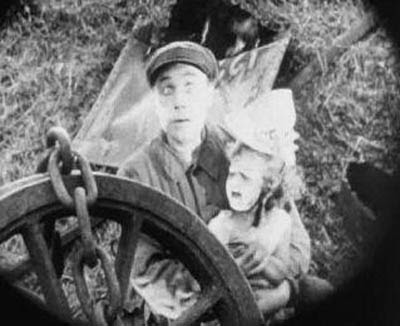 While I’ve become more and more attuned to silent films the more of them I watch, it’s come to my attention that in general, silent comedies aren’t long enough and silent dramas are far too long. This is no doubt because of the conventions created and necessary in the early days of cinema. With audiences unsophisticated in the language of film and the inability to use actual speech, many things simply took longer to get through to the audience. Abel Gance’s La Roue (The Wheel) is a perfect example of this. While a landmark film for many reasons, even its trimmed length is far longer than it feels like it needs to be.

The story is one to make Freud chomp down harder on his cigar. A train driver named Sisif (Severin-Mars) discovers a young girl after a terrible train crash. He determines that the girl is now an orphan and named Norma, and he takes her home to raise side-by-side with his son. The two children grow up together, and Sisif cares for both of them.

The boy, Elie (Gabriel de Gravone), becomes a violin maker while Norma (Ivy Close) appears to live a life of tending the house and teasing Elie. The two believe themselves to be brother and sister, because Sisif has never told them any differently. However, Sisif knows the girl’s origins, and finds himself slowly becoming entranced with her, which causes him to start drinking heavily. In the meantime, a man named de Hersan (Pierre Magnier) has also taken an interest in Norma. Sisif confesses his completely natural love for his adopted daughter to de Hersan, who blackmails the old train driver: let him marry Norma, or he’ll tell the girl of her origins.

Sisif complies, and sends Norma away, driving the train himself, but the grief and pain causes him so much distraction that he almost crashes. However, de Hersan stays true to his word, and keeps Norma away from the train yard and Sisif’s house. Eventually, Elie discovers Norma’s origins and he pines for her two, and on those rare occasions Norma attempts to visit her adopted family, they send her away because both of them love her. Elie confesses his love in a note he slips into a violin, which de Hersan breaks. He confronts Elie, and the two fight, killing each other.

During all of this, incidentally, Sisif is nearly blinded by an accident, and because of his terrible eyesight is transferred from the main train yard to driving the little funicular train up the side of the Alps, so that confrontation between de Hersan and Elie occurs on a splendid mountain backdrop. Sisif slowly loses his eyesight completely, and Norma discovers this, and moves back into his house without letting him know. Eventually he discovers this and…well, I won’t spoil that part.

While the story is an interesting one and Gance’s style and technique are landmark, La Roue is incredibly slow. The story delineated above takes nearly four-and-a-half hours to chug through, and the original cut of the film clocked in at something closer to seven hours. Much of the reason for this is the conventions of silent film. It takes forever for Gance to show us anything because he has to hammer every truth home repeatedly until he’s sure that the slowest dimwit in the audience gets it. For instance, when Sisif starts to lose his eyesight, we see him look at something, then we see it all blurry from his perspective. Then Sisif looks at something else. We see it blurry. Then he looks at something else. We see it blurry. Then he…you get the pattern. To a modern audience, this was established the moment we saw something blurry from his perspective, but here, we see this time and time again, and then we get a title card telling us that he’s losing his sight.

This is frustrating. It slows down the narrative terribly, and makes a great deal of this film a chore to get through. While perhaps necessary for the time in which the film was made, for a modern audience, at least an hour of this film could easily be removed without losing anything but essentially repeated footage that we no longer really need to establish the things that Gance wants us to know. Other things simply become annoying. Severin-Mars evidently believes that the way to convey blindness is to roll his eyes up into his head and stare out like a zombie, which is both unsettling and weird.

There are some genuinely great things here, too. Gance uses extremely fast cuts from scene to scene, sometimes with multiple edits in a single second of film, giving us almost subliminal flashes of images at times. It’s a technique he continued with Napoleon, but here he shows that it was a technique he had already been developing.

It’s no coincidence that our main character’s name is a couple of sounds off from Sisyphus, who was depicted in the afterlife of Greek mythology as endlessly pushing a boulder up a hill. Sisif here endlessly toils on the rail line and endlessly suffers from his love for his adopted daughter. It’s a nice little sop to those with a love for the classics.

La Roue is a film that I respect for the work that Gance did and the techniques that he worked with and advanced here. It’s not a film I like that much, because I’d love to pare it down even further, to maybe something with a running time of 150 minutes or so. There’s a lot of fat here for the modern viewer, so if you do sit down to watch this one, be prepared.

Why to watch La Roue: It continues Abel Gance’s groundbreaking film techniques.
Why not to watch: It’s much longer than it needs to be.
Posted by SJHoneywell at 10:05 PM