When I was a kid, my siblings and I were expected to be reading something at all times. I don’t mean that we always had to have our noses in books, but if Mom or Dad asked us what we were currently reading, we were supposed to have an answer, and an answer that changed pretty regularly. Mom never cared what we read as long as we read something. Dad was pretty adamant that we should be reading the classics. I remember vividly a “discussion” between him and my brother Tom about Tom reading “The Grapes of Wrath.” Tom resisted, calling the book “The Grapes of Snore.”

Actually, I think all of us resisted. One sister read mysteries; the other read Westerns (specifically Louis L’Amour). One brother read science fiction; the other (Tom) read pulps. I split the difference on my brothers and read both science fiction AND pulps. I never did read “The Grapes of Wrath/Snore,” but as of today, I’ve seen the movie version. 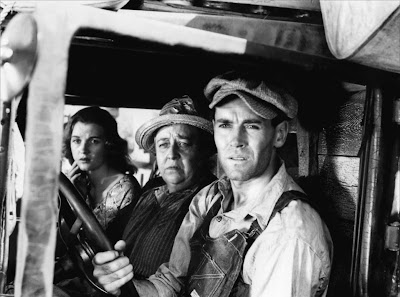 The Grapes of Wrath is the story of the Joad family from Oklahoma. Tom Joad (Henry Fonda) has just been released on parole for killing a man in a fight. He returns to the family farm to find it deserted. In fact, the whole place is deserted. Everyone has been run off the land thanks to the Depression and the Dustbowl. With no crops, there’s no food and no money, and all of the land is being repossessed. Tom meets up with Casy (John Carradine before he became wizened), a former preacher. They also meet Muley (John Qualen), now insane and staying on the land despite the efforts of the local law to evict him.

Tom and Casy find the rest of the Joad clan on another family farm, but the joy is short-lived since this branch of the family is being evicted as well. The entire clan, plus Casy, load into a converted wagon/truck and head to California to look for sharecropping and field hand work. Along the way, they’re warned that there isn’t much work to be had, and a couple of the older family members die en route.

Once in California, the Joads discover that what they’d been told was the absolute truth—there isn’t any work to be had, and the work that is there doesn’t pay. The Joads move from camp to camp looking for something and finding nothing. At the first camp, an agitator tries to stir up the people, and is put down by the local constabulary. In the course of this, the sheriff kills a bystander, and Tom knocks him out. Casy stands in for Tom and is arrested, and the Joads head off again.

They find work at the next camp picking peaches, but discover that the only store in the area is run by the company, and the prices are so high that they aren’t much better off than before. Here, Tom runs into Casy again. Casy has essentially become a communist, or at least a dedicated socialist. He, along with a few others, plan to agitate this camp because the company is cheating the people. They promise five cents a bushel, but pay only two-and-a-half. On the way to start up their trouble, Casy is killed by a thug from the farm. Tom kills the man in turn. He isn’t seen, but he takes a crack across the face, and is now a marked man quite literally. And so the Joads are forced to leave again in a pattern that will repeat itself one more time before the end of the film.

Like many great stories and many great films, The Grapes of Wrath consists essentially of heartbreak after heartbreak for the title characters. All the Joads want is honest work and the chance to feed their family, and at every turn, they are beaten down by bad luck or flat-out greed of the wealthy farmers who hire the migrant help. Each death or disappearance in the family is treated both with sorrow and with the relief of one less mouth to feed. Noah Joad (Frank Sully) simply vanishes at one point. Rose of Sharon’s (Dorris Bowdon) husband Connie (Eddie Quillan) bugs out as well, again to relative indifference from the family. Does it matter that Rose of Sharon is pregnant with his child? Not really—he’s an adult that no longer needs feeding.

Tom Joad is an interesting character if for no other reason than the disconnect between how we as an audience are intended (and do) feel about him and his evident personality. Consider that Tom does a four-year prison stint for homicide, gets into a fight at the first migrant camp, and kills a man in the second one. In most situations, this would be evidence of a man with some sort of pathology, or at least with serious anger issues. However, we accept these faults from Tom because we spend so much time with him and see so much of him. In each case, we come to see Tom’s anger and violence as not merely acceptable, but as justifiable.

The one person I haven’t said much about so far is Ma Joad (Jane Darwell). In many ways, she is the moral center of the film, wanting nothing more than to keep her family as together as she can and keep them going. Ma Joad is a pillar of strength in this terrible, unforgiving world, and Jane Darwell not only acts the part, she looks it. This is a face worn by care but still full of hope and optimism, and ready to smile at the slightest thing. She seems like such a sweet woman—in the scene where the bystander is killed by the sheriff, I thought for just a moment it was Ma Joad, and I considered turning off the movie in that moment. You just don’t do that to the sweet old lady.

Is it a great film? It is, and for a wonder, I actually don’t mind the tacked-on uplift ending here. If anything, the film is too tame and doesn’t go far enough in exposing the plights of the Okies in the Dust Bowl, but I’m certain they went as far as they could at the time. It’s the film that made Henry Fonda who he was, and there’s a reason for that.

Why to watch The Grapes of Wrath: Powerful performances and an equally powerful narrative.
Why not to watch: Despite the last few moments, it’s a two-hour long downer.
Posted by SJHoneywell at 5:46 PM