Film: Triumph des Willens (Triumph of the Will)
Format: Streaming video from NetFlix on middlin’-sized living room television and on laptop. 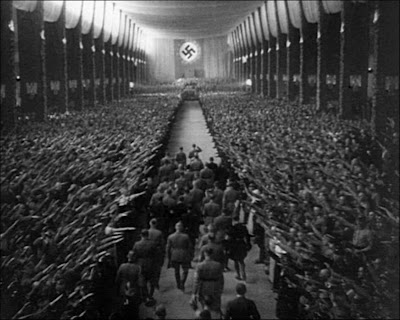 While I have nothing other than my own experiences to base this on, I’d guess that no single event in human history is better documented in film—both fiction and non-fiction—than World War II. There’s a metric ton of films out there on the years between 1939 and 1945, particularly for those years in which the U.S. was involved. There are also many films covering the pre-war years and the years of the aftermath. All of them tend to look at the war in nationalistic terms, which is to be expected. Perhaps none does so as completely and as menacingly as Leni Riefenstahl’s Triumph des Willens (Triumph of the Will).

Triumph des Willens, of course, is one of the most notorious films ever created. The film was created specifically as a propaganda piece for the Third Reich at the behest of Hitler himself, who gave Riefenstahl free reign over where she could go and what she could film. The result is one of the seminal pieces of propaganda ever made. Triumph des Willens is a graduate-level class on stirring the emotions and engendering nationalistic pride.

This is almost a pure film. There is no real story here, but there wasn’t a story intended. The goal of the film is to depict as purely as possible the glories of the Third Reich—columns of blonde, marching youth, good-natured athletic competition, thousands of smiling faces…and of course thousands of cheering people offering the familiar “heil” gesture.

Keep in mind that I watched Shoah recently, which certainly clouds any remote chance I may have had at objectivity. As the camera pans over the faces of the men who controlled Germany in the mid-1930s, it is nearly impossible to repress a well-deserved shudder. Seeing the faces of people like Goering and Himmler, shown here larger than life and as heroic figures when the reality is known is nausea-inducing. It’s worth noting that the correct German pronunciation of the last word of the title is a homophone of the English “villains,” a piece of linguistic truth—this film truly depicts the triumph of villains at the height of their power.

That reality is difficult to get past. It ironically is a feat of will to look past the reality of a film celebrating human monsters at the height of their temporal reign, before their plans and actions made the very name of their political party synonymous with evil. The natural reaction is to look at these men and immediately think of the evil that they wrought. Half an hour or so into the film, when a parade of men stand at a microphone and address the throng below, the most natural thought is be instantly repelled. At least that was my thought throughout the film—it was impossible to not see this without an accompanying cloud of tangible evil. Let’s get that out there now. If you are not a skinhead, this film trumpets ideals that you find repugnant. This will well up periodically throughout the film like bile rising in your throat.

It would be easy to stop there, but if that was all there is in this film, then it wouldn’t be a part of The List. It’s unpleasant to look at something that touts so great an evil and find something in it beyond a desire to sick up. And here’s what it is: Triumph des Willens is perhaps the purest piece of propaganda ever created. There is nothing in this film that does not further preach its constant ideal of German significance, German superiority, German will, and German dominance. The film is all spectacle and bombast, but bombast with a purpose. Placed into context historically, Germany was in the throes of a terrible economic depression. It was forced to pay off massive debts it couldn’t afford. Its military had been stripped bare, leaving the country essentially defenseless and surrounded by historical and hereditary enemies. This sort of spectacle and bombast was the sort of tonic that many a German wanted, and it is designed to give them exactly what they want to feel good about their nationality again.

This is a kingmaking film—Hitler is shown throughout as more than a man. Often he is filmed from below, giving him a commanding presence over the proceedings occurring in Nuremburg, and always to massive throngs of deliriously adoring German folk. We just as frequently get close-ups of young, attractive Germans, almost always blonde, standing straight and tall, looking like Teutonic gods. Imagine the effect this would have had on a proud people suddenly downtrodden, looking through the windows at the rest of Europe.

Triumph des Willens is a masterpiece of propaganda, and all the more horrible because of it. That it was used to help solidify one of the greatest evils in the world only makes its power all the more terrible.

It is only through a lens of history that the underlying horror of this film becomes evident. It is precisely because we know the horror and terror created by Hitler, Himmler, Goebbels, Goering, and the rest that the power of the propaganda here becomes so awful. Seeing row upon row of people giving a unified Nazi salute is terrifying.

But there is still power in the images shown here. It is not surprising the George Lucas used parts of this film as inspiration for the medal ceremony at the end of Star Wars. That more than anything shows the weight of history here. Riefenstahl shows this and we recoil because we know what evil she is actually depicting. Lucas shows us the same thing and we cheer. That’s a sobering thought on the deep psychological power propaganda has over all of us. It should be.

Why to watch Triumph des Willens: True history as it was made.
Why not to watch: You will never encounter more concentrated evil in one film.
Posted by SJHoneywell at 9:55 PM

Email ThisBlogThis!Share to TwitterShare to FacebookShare to Pinterest
Labels: documentary, Leni Riefenstahl, Triumph des Willens, Triumph of the Will