The Greatest Muttonchops in History

My intent was to post this last night, but Blogger was down. And then I had to work all day, so I'm just getting to it now.

It makes a certain amount of sense to me to view silent films and talkies not just as different sorts of film, but as entirely different art forms. The two are extremely different and have different conventions. What works in a silent movie comes off as melodramatic or maudlin in a talkie film. Silents are designed for that sort of melodrama, while there is a much greater possibility for subtlety with talkies. There are different nuances. I don’t mean to say that silent films are simple or simplistic; they aren’t. They’re different, though, and judging them by the standards of talking pictures is more than a touch unfair. 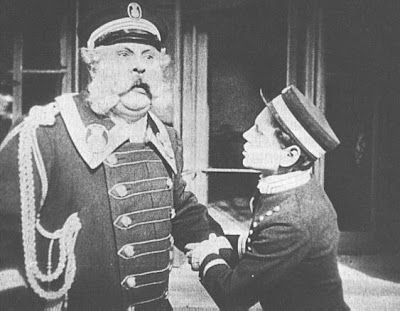 Der Letzte Mann (The Last Laugh, although the literal translation is The Last Man) may well be in one respect the greatest thing to come from the mind of F.W. Murnau, and that’s really saying something, considering the films Murnau put together. What makes this film so interesting is that it tells a complete story, start to finish and does so with an absolute minimum of intertitles. In fact, in terms of traditional intertitles, there is only one, and it comes near the end. Otherwise, the only actual text is a letter and a newspaper.

The story concerns a hotel doorman (Emil Jannings), who has worked at a grand hotel as a doorman for most of his adult life. However, he is now old, bent, and overweight, and is no longer able to perform the job as he once did. Rather than being pitched into the street, his years of dedicated service are rewarded—he’s given a different job. Instead of working as a doorman, he will instead be the washroom attendant.

Rather than being grateful for his continued employment, the unnamed doorman has his entire world shattered. Evidently, his entire definition of himself came from the fact that not only was he a high-profile doorman, he was a doorman at a very prestigious hotel. Cut off from that job, he freezes, unable to comprehend his life without his shiny uniform. And he plots. He sees his old uniform hanging in a locked cupboard. He steals the key, and at his first opportunity, he steals back his hat and coat.

Immediately following this theft, the former doorman is brought into what appears to be a wedding party, and is introduced to everyone there as the hotel doorman. In short, he hides his demotion from as many people as he can to maintain his dignity, since he defined himself entirely through his job. Of course, nothing can be this simple. It is discovered that he is in fact not the hotel doorman but a washroom attendant, and he is ridiculed by everyone who knows him.

So let’s stop right there for a second. This is where I have trouble with this story. The old dude has worked at the hotel for evidently his entire adult life and no one has ever seen him as the doorman? Not a single person of his acquaintance has ever walked past the hotel when he was standing out front? Do they assume that he’s spent the last 40 years lying to them? I can’t say that I’ve seen every single person I know at his or her place of work, but I imagine that someone I know has. The fact that no one has ever seen our hero actually working until after he loses his prestigious job defies imagination.

We also need to discuss the ending , if only because of its native improbability. But hey, chances are that you haven’t seen this, so I’ll tuck it under a spoiler.

In the one intertitle we actually get in this film, we are told that the author of the film has taken pity on our poor hero and given him a massive amount of money. This allows the Jannings character to quit his horrible washroom attendant job and get served at the hotel he used to be forced to work at, specifically because a wealthy man dies in his washroom, and the man’s will stipulates that his vast inheritance goes essentially to the person who he is with when he dies. Silly.

There are some fun things in this film. The old hotel doorman gets completely hammered at the wedding, and we get a highly entertaining dream sequence following this in which he is capable of lifting the heaviest of his patrons’ packages with one hand. He then demonstrates his strength by hurling these packages into the air and catching them, to the thunderous applause of everyone else in the hotel. What sells this as a drunken dream, though, is the fact that the entire thing is completely out of focus. Equally entertaining is his drunken ramble the following morning.

What’s more impressive is how much Murnau was able to do without giving us speech. Almost the entire film is told in silent movie pantomime, and the acting has to tell the story, because we are not given anything else to help us. This, if nothing else, shows the incredible skill with which Murnau could wield a camera—storytelling without any dialogue of any sort is quite impressive.

And yet ultimately, even Murnau himself commented that the film was ridiculous on its face. Washroom attendants made a better salary than doormen did, which meant that in a very real way, this devastating loss of identity and self came with a promotion and a pay raise.

Really, that’s my objection to this entire film. It’s ultimately quite silly, as are the reactions of every single person in the film to every part of the film. Okay, so the old man was a doorman and is now humiliated by being a washroom attendant—so the common reaction is for everyone to point and laugh and ridicule him? My experience in things like this is that most people would probably shrug and figure he was either trying to make himself look better, or that something had happened. It’s not like there’d suddenly be jokes circulating through my town about the bathroom dude who wants to open doors for people. And this really is what it’s like. Once the people from the wedding discover that he is a lowly washroom attendant, it’s just painful minute after painful minute and scene after scene of the poor old dude getting sand kicked in his face. In fact, the bat-faced woman who discovers the reality gives such an evil laugh and look that it’s like the Wicked Witch of the West contemplating the death of Dorothy. Jeez. And, after he’s found out, his next customer acts like not getting washroom service is like being castrated. Really, who takes anything this seriously?

It should also be noted that in this film, Emil Jannings has some of the most impressive facial hair ever filmed. Seriously, it has its own area code.

Why to watch Der Letzte Mann: A story you can follow without reading.
Why not to watch: The story is pretty silly and stupid.
Posted by SJHoneywell at 4:59 PM