I’ve never read The Hitchhiker’s Guide to the Galaxy books. There’s a reason for this—it’s because everyone I know who has read them has told me how great they are. At this point, there is no way possible for them to be as good as I expect them to be. They can’t possible live up to how great everyone tells me they are. And so, rather than be disappointed in them, I’ve chosen (at least for now) not to read them. 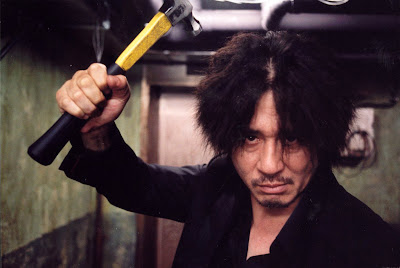 Oldeuboi (Oldboy) is like this. Everyone has told me how incredible this movie is. At this point, it can’t just be good. It’s got to be nitro-burning funny car, second coming of Jesus good for it to come close to the expectations I’ve been told to have for it. It has to be all the sushi I’ve ever wanted to eat and someone else is paying good. And you know what’s that good? Nothing.

Oldeuboi starts with Oh Dae-su (Choi Min-sik), who is drunk off his ass and being held in police custody. It is his daughter’s birthday, and he has a present for her. He’s bailed out by his friend No Joo-hwan (Ji Dae-han), and he calls his daughter from a pay phone. Joo-hwan speaks to her as well, but when he turns around, Dae-su is gone.

Dae-su has been captured by someone and is locked in a hotel room. He’s kept there for 15 years as some sort of punishment, and fed only fried dumplings the entire time. He keeps himself sane with television and by shadowboxing as well as punching the wall to toughen up his fists. He also works on escaping, digging his way through the brick wall to freedom. Before he can get out, though, he is released. He finds himself on the top of a building (presumably in Seoul) in a new suit. Shortly thereafter, he’s handed a cell phone and a wallet full of money.

Dae-su has been out of the world for a decade and a half, and he’s a fugitive to boot, since his wife was murdered around the time of his disappearance, making him the lead suspect. All he wants is to discover who locked him up and why, and then have his revenge on that person or persons. When he confronts the man at about the midpoint of the film, he’s told that he has just five days to discover exactly who his tormentor is, and why he was locked away for so long.

What happens in five days? Well, if Dae-su discovers everything, his tormentor (named Lee Woo-jin [Yu Ji-tae]) will kill himself. If he doesn’t, he’ll kill Mi-do (Kang Hye-jeong), a young female sushi chef who has fallen in with Dae-su.

So what we have here is a pretty non-standard revenge story, but make no mistake, this is a revenge story fore to aft. The sell here, the reason that people get all filmgeek about this movie is not the plot, although it is inventive for where it goes, and also disturbing. The sell here is a few absolutely key scenes.

1) Upon his release, Dae-su stands on a rooftop with a man preparing to commit suicide. Dae-su saves the man and tells him his story, then walks away before the suicide can tell his story. As Dae-su walks out of the building below, the man’s body lands on a car in one of the most darkly comic moments I’ve seen in a long time.

2) Dae-su enters the sushi restaurant where Mi-do is the chef. He asks her for something still alive. She places a live octopus in front of him and tells him she will prepare it for him, but he picks it up and eats the damn thing while it’s still alive. The tentacles keep wriggling while he bites down and they curl around his face while he’s chewing.

3) Dae-su confronts one of his captors and ties him down to a chair. Dae-su then pulls out the man’s teeth with a claw hammer until he gives information.

4) After the teeth incident, Dae-su attempts to leave, and is confronted by a hallway full of goons. What follows is an incredible fight sequence that looks like a single take. This might be one of the most realistic fight sequences I’ve seen. Combatants swing at each other, then stop and take a breather, just as real people would in such a situation. It goes on forever, and is brutal.

There are others, but they’d need a spoiler tag, and I’m just not up for that here.

Oldeuboi, despite moments of black comic brilliance and some great action sequences, is really a very disturbing movie on a lot of levels. As particular details start to come to light, the film tracks further and further into weird, then creepy, then disturbing, and then full-on nauseating. Particular scenes become horrifying when viewed again with the ending in mind, which is no doubt precisely what Park Chan-wook had in mind here.

Is it good? It is. Was I disappointed? I had to be after all of the build-up. Oldeuboi doesn’t meet or exceed the massive amount of hype it gets, but I need to remind myself that this isn’t the fault of the movie. Brace yourself for an unusual action film, one in which the action treads closer to realism, but the plot is straight out of a nightmare. It’s good, perhaps even great, but it’s not everything I was lead to believe.

Why to watch Oldeuboi: An action movie and a revenge movie that doesn’t conform to the clichés.
Why not to watch: Wiggly tentacles.
Posted by SJHoneywell at 11:57 PM