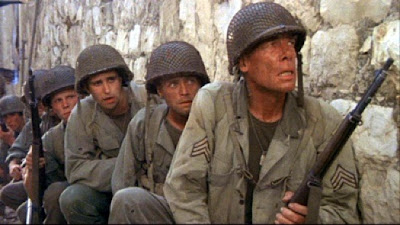 I have no idea why I watched The Big Red One the first time other than the fact that it was a war movie, and when I was a kid, war movies were my favorite genre of film. I don’t think I knew then that the official museum of the First Division was almost literally in my backyard, or at least within a 15-minute drive. All I knew was that it was a war movie and that guys shot at stuff and got shot at, and bad guys died, and that was enough for me.

The film opens in the days at the tail end of World War I. An unnamed man (later referred to only as the Sergeant and played by Lee Marvin) is wandering the battlefield when he is attacked by a crazed horse. The horse destroys his rifle. The man then encounters a German soldier who tells him the war is over. Not believing the German, the man kills the German with a knife, only to discover later that he’d been told the truth, making what he did not killing an enemy, but murder, at least in his own mind.

We flash forward then to World War II, with a group of new soldiers heading for North Africa under the command of the Sergeant. Of this group and the Sergeant’s rifle squad, we are concerned really with four men: Zab (Robert Carradine), who is an aspiring novelist and also our narrator through the film; Griff (Mark Hamill), a semi-pacifist and sharpshooter; Vinci (Bobby Di Cicco); and Johnson (Kelly Ward). The other soldiers in the rifle squad come and go, but these four remain, fighting through North Africa, Sicily, D-Day, and across Europe until the end of the fighting.

And that is really all that happens here. There is no major overarching plot to keep us glued to our seats. While several of the characters—particularly Griff—experience some changes between our opening frames and the credits, this film is different from most World War II films and most war films in that there is not a particular mission or event that concerns the bulk of the action. Instead, the plot is the survival of these men in the squad—can they make it to the other side of the war with not only their bodies but their minds still intact?

There are a number of particular events that occur through the film, of course, to show us in the audience the true horrors of battle and of warfare. We see the men dig into foxholes at Kasserine, we see them fight German panzer divisions on Sicily. We see a vicious firefight in an insane asylum. All of this culminates in the liberation of a concentration camp and the realization of what has been going on far behind the German lines.

While both war and anti-war films have been made almost since films started rolling more than 100 years ago, The Big Red One is different from both in many respects. It’s almost neutral on the idea of whether we should fight in wars or not. War is treated not as something to seek for and find glory and honor. It’s also not treated as the greatest evil of Mankind and something that should be avoided at all costs. Instead, war simply exists, and men go to fight and die in it, and some of them live to see the end while others are killed along the way. In essence, war here isn’t objectively good or bad—that judgment is up to each of us individually.

Certainly war isn’t glorified here. The men are simply men—tough in many cases (Lee Marvin couldn’t possibly be something other than tough), dedicated, good soldiers, and even willing to fight for their country, but there is no tickertape parade or swelling musical strains here. At the same time, the theme of killing in war versus murder is played out multiple times, and Fuller’s conclusion seems to be that these two things are not synonymous—that there exists a very real difference between murder and death in war. Again, war simply exists, and the rules for it exist, and there is no objective judgment. What we learn by the end is that war exists sometimes because it has to.

In many ways, it feels like American war movies grew up some with the creation and release of The Big Red One. Instead of nationalistic chest thumping, propaganda, or pacifism, we get instead something that attempts to approach simple reality.

All well and good, but how is the movie? It’s a keeper. There’s enough going on here to keep a dedicated action fan watching. There’s enough “us good, them bad” for even the staunchest military hawk to clap hands and cheer. There’s enough “war is hell” for the doves. And despite this, it doesn’t feel scattered or difficult to follow.

I can’t say it’s my favorite war movie, but it was an important step in moving the film industry toward more realism in such films. That it does so without obvious moral judgment is even more impressive.

Why to watch The Big Red One: American war movies grown up.
Why not to watch: War is never pretty.
Posted by SJHoneywell at 7:58 PM

Email ThisBlogThis!Share to TwitterShare to FacebookShare to Pinterest
Labels: Samuel Fuller, The Big Red One, war