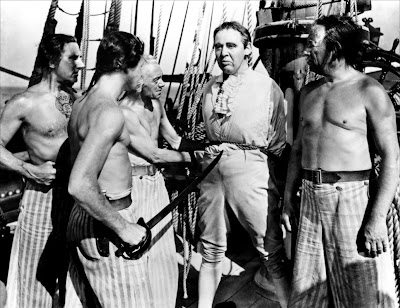 There’s something special about a film of men on the high seas, battling the most powerful of elements and each other that gets the blood stirring. While seagoing movies of wooden ships and iron men are no longer yearly fare, enough of them were made in bygone years to last us for a long time. Many of these films tell the tale of war; others tell of piracy (a very popular thing at the moment). Still others tell of treachery and mutiny. Some of the greatest sea pictures are of the mutiny or almost-mutiny variety. Mister Roberts and The Caine Mutiny both fall into that broad category. So too do all of the different versions of Mutiny on the Bounty.

The story of the Bounty has been filmed multiple times—as a silent film, as the version here with Clark Gable, another version in the ‘60s with Marlon Brando, and an updated ‘80s version with Mel Gibson. There may well be other versions as well—it’s a popular story not the least of which is because of the various themes that it explores. Mutiny on the Bounty touches on themes of loyalty and duty as well as ideas of cruelty and leadership. We have base human emotions, nobility, sacrifice, danger…in short, everything a “boy’s own” adventure should have.

Our ship, the HMS Bounty, is heading to Tahiti on a trade mission. The ship is to transport a cargo of breadfruit trees to the West Indies to be replanted for food for the slaves working there. To staff the ship, the crew takes men from jails and press gang others into service. Sadly for those picked up in the press gang, the HMS Bounty sails under the captaincy of Bligh (Charles Laughton).

Captain Bligh (one letter away from “blight”) is a great seaman and a sailor’s sailor. His main issue is that he’s a complete son of a bitch. Certainly capable of sailing a ship through almost anything and to almost anywhere, he is intensely dislike by his crew for his obstinacy and his nearly pathological cruelty to the men. Any slight is dealt with in the harshest, most unfair methods, and Bligh brooks no word against his own. He is always correct, never to be corrected. A man asking for water while working is given water—by being keelhauled and killed. We learn of Bligh’s insane “by the book” mentality when before sailing, he is tasked with punishing a man who struck his captain. Before the punishment is given, it is discovered that the man is dead. Bligh orders the corpse whipped anyway.

As the journey progresses, we learn that this is the normal state of affairs for Bligh. He expects not merely for his orders to be obeyed, but blind obedience to every word he utters. A lapse in his own memory means punishment for anyone who disagrees with him. Often, it appears that he exacts punishments merely for the sake of doing so, hoping to cow the men into complete submission to his every whim. Just as critically, once Bligh has his mind made up about something, no force in the world can change it.

Opposing him is Fletcher Christian (Clark Gable), who believes that the men onboard would be better served by a little thought and a little mercy rather than draconian punishments for everything up to and including doing their duty as instructed. He begins to openly oppose the captain, especially once the ship reaches its final destination. Less obvious in his opposition to Bligh is Byum (Franchot Tone). Byum struggles with Bligh’s cruelty as much as Christian does, and wants things to improve for the men as well, but he is also young enough and is enough of an idealist that he refuses to compromise on what he considers to be his duty to King and country.

We get a nice idyll in Tahiti, where both Byum and Christian find sweet, sexy, native love until it’s time for the Bounty to head off back to the West Indies. Not too long after this, Christian has finally had enough of Bligh’s mindless cruelty and stages a mutiny with many of the men onboard. Byum, trying to stage a counter-mutiny, is trapped below decks and is thus not able to be put into the longboat with the rest of those loyal to Bligh.

This sets up the interesting sequence in which Bligh proves his ability, sailing a tiny little longboat across 3,500 miles of open ocean to safety. Once there, his goal is to get a new ship and sail back to Tahiti, confront the men who disobeyed him, and see as many of them swing from a yardarm as possible.

Mutiny on the Bounty won the Best Picture Oscar in 1936, and all three of the principal actors were nominated for Best Actor, the only time in history such an event has occurred.

Having now seen the film, I wonder at its inclusion. Certainly it’s a fine film, and while the scenery and the beauty of Tahiti are something to behold, it hardly seems like enough. I can’t think of a solid reason to want to watch this again. Without a doubt, Bligh is a bastard coated bastard with bastard filling…and? Fletcher Christian certainly talks a good game, but here I find it difficult to side with him fully.

Why to watch Mutiny on the Bounty: A rousing sea adventure.
Why not to watch: Bligh will make you want to punch through the screen.
Posted by SJHoneywell at 6:36 PM