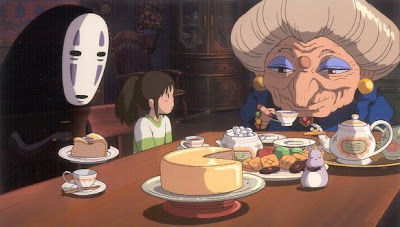 My podcasting partner Nick Jobe reacted with a certain amount of amusement when I told him that I wasn’t a big fan of anime. His reason for this is that anime isn’t so much a genre of film as it is a method of presentation. Anime doesn’t mean girls dressed in sailor outfits, demons, and giant robots. It’s just that a lot of anime films include elements like that. It’s sort of like saying you don’t like foreign films—“foreign” isn’t a genre, no matter what NetFlix, Blockbuster, and the Academy Awards may have told us. So Nick recommended I watch Hayao Miyazaki’s Sen to Chihiro no Kamikakushi) (Spirited Away). As it is on The List, I couldn’t really say no.

One of the biggest problems I tend to have with anime as a style is an almost total lack of exposition. Frequently in anime films, we’re tossed into a world laden with spirits or machinery or demons or magic or a combination of these things, and none of it is explained. Characters have bizarre powers just because they do. There’s no context for much of what happens, and I just get confused. And so I give up.

I’d like to say that this is a problem with this film, but it really isn’t, and the reason it’s not is a slice of brilliance. A young girl named Chihiro (Daveigh Case, and from this point on, the actors mentioned will be from the dubbed version) is moving to a new area with her parents (Lauren Holly and Michael Chiklis). They get a little lost and wander into an area that appears to be an abandoned amusement park. Hungry, her parents find cooking food and consume all of it. But it’s food for the spirits, and consuming it turns her parents into pigs.

To rescue them, Chihiro is helped by another spirit named Haku (Jason Marsden), who tells her to go ask for a job in the spirit bathhouse. She will need to be wary of the witch Yubaba (Suzanne Pleshette) who runs the place, but Yubaba has sworn an oath to give a job to anyone who asks for one. Now, while working at the bathhouse, Chihiro (now called Sen—Yubaba gains power over people by stealing their names) must find a way to help her parents.

Along the way, Sen/Chihiro gets assistance from Yubaba’s identical twin sister (also Suzanne Pleshette) and a demon called No-Face that truly has no face and wears a mask above his giant, toothy maw. The adventure takes her through a number of places in the giant bathhouse and on a mysterious train ride.

And it is a magical adventure, and a disturbing one in places. The creatures that appear in this other world are sometimes terrible and dangerous, and it seems that Chihiro/Sen is in some very disturbing trouble at times. Of course, all kids movies have something of that sort of danger in them—without the danger, there’s not much of a movie. But here, some of these things seem a little beyond the pale for the very young. No-Face, for instance, has a nasty habit of eating living creatures that work at the bathhouse, and then speaking in their voice. Later, after he has eaten a huge amount of food (and three creatures), he vomits everything up in a huge flood of black sputum. It’s pretty nasty, and while older kids won’t have a real issue with it, I can certainly see little kids being a bit traumatized.

Additionally, and this is quite significant, I think I would have been much better served by watching this film with the original Japanese voicework instead of the English dubbing. Typically, I watch foreign films with subtitling and not dubbed versions whenever possible, but dubbing bothers me far less with animation than it does with live actors. However, in this case, Sen’s voice in the English version is an incredibly annoying, high-pitched little girl voice that raises the hair on the back of my neck. Having completed the movie in English, I watched a bit of the original Japanese, and it was far better.

Am I an anime fan? I still can’t say I am. There’s something about the style of the artwork that tweaks me. But that’s the sort of thing that can’t really be helped, can it?

Sen to Chihiro no Kamikakushi is unique in its look and is a completely unique story in many ways, at least in my experience. It follows a tried and true pattern though of a young child having a magical adventure in a mysterious, beautiful, and dangerous land. Like many similar films, a great deal of what happens is the young child attempting to get home and save someone, in this case, her parents. But with that said, the vision of this film is extraordinary. I may not understand this world I’ve been thrust into for a few hours, but there is real enjoyment in looking at it.

But in this, the film still fails in a significant regard. Not being completely familiar with Japanese culture leaves me a bit on the outside looking in here. I think this spirit world might make more sense to me were I more steeped in Japanese traditions and lore. But I’m not, and this world is never explained, and so a part of me is always at least a little confused.

Why to watch Sen to Chihiro no Kamikakushi: The story is weird and marvelous.
Why not to watch: Little ones might have a real issue with giant vomiting ghost monsters.
Posted by SJHoneywell at 11:55 PM