Me and Howard Hughes 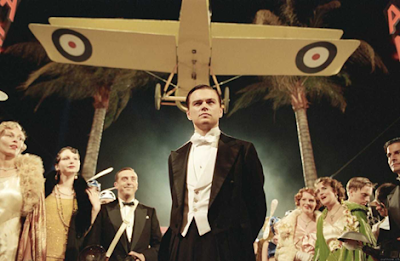 Twenty years ago, the actor most frequent thought of in combination with Martin Scorsese was Robert Di Niro. These days, Leonardo DiCaprio would be just as accurate an answer. DiCaprio has made at least four major films with Scorsese, each one garnering a ton of critical acclaim. Similarly, Scorsese seems to have mellowed in some ways. While The Departed seemed like a trip back to his roots, he has branched out in terms of theme and subject in his films. A good example of this is his biopic of Howard Hughes, The Aviator.

While the film begins with Hughes’s mother bathing him and telling him about the dangers of cholera and typhoid, most of the film concerns the man’s life from the late 1920s through the middle and end of the 1940s. In short, these are the years of Hughes’s greatest productivity, innovation, and notoriety, and the beginnings of his eventual decline into paranoia, OCD, and compulsive behavior.

Hughes (DiCaprio) inherits Hughes Tool Co., netting him a massive fortune, which he uses to finance his own entry into the motion picture industry. His first movie, Hell’s Angels, took three years and close to $4 million to produce, and lost money despite being a hit. During this time, he hires Noah Dietrich (John C. Reilly, who reminds us every now and then that he can be an excellent dramatic actor) to run Hughes Tool, and Dietrich eventually acts as Hughes’s go-to for virtually everything in his life.

Much of the film concerns the many loves of Howard Hughes, including (but hardly limited to) Katherine Hepburn (Cate Blanchett), Ava Gardner (Kate Beckinsale), and a 15-year-old high school student named Faith Domergue (Kelli Garner). But despite all of the women, the first and only true love of Howard Hughes was flight. During the course of the film, Hughes sets an airspeed record and pushes the limits of aviation in a number of ways.

But this isn’t what made Hughes interesting. What did was his crippling mental and emotional problems. We get small hints of these early on, but they become progressively more pronounced and severe as the film continues. Hughes was a germophobe, and this is portrayed in painstaking and poignant detail in the film—washing his hands until they bleed, standing in a public restroom until someone else opens the door for fear of touching the handle. Hughes’s OCD and cleanliness tendencies threaten to cripple him completely. What we see in the film is not the kooky nuttiness that we might think such problems might cause. We don’t see the “Oh, I’m a bit OCD” behavior that most of us exhibit a little of—fixing our CD collection when one is out of order. At one point, Hughes spends nearly three months in a projection room, stripped naked, urinating in empty milk bottles. He effectively quarantines himself for fear of illness.

What’s also fascinating is the enemies he makes and battles through the course of the film. Most notable is Juan Trippe (Alec Baldwin), Chairman of Pan Am and rival of Hughes’s own TWA. Trippe, along with Maine Senator Owen Brewster (Alan Alda), attempt to wrest a monopoly on international flight for Pan Am, and see Hughes’s innovations in aeronautics as a major roadblock. They play on his crippling fears to attempt to cow him into submission and force him to sell off TWA to avoid embarrassing investigations into his—quite frankly bizarre, even by wealthy eccentric standards—personal life. What’s shocking here (and this is closely based on the history) is that despite his enormous wealth, Hughes came out of his battles against Pan Am and the Senate looking much like the wronged everyman in battle with titanic corporate and government forces arrayed against him.

In short, The Aviator is a portrait of a brilliant, tenacious, and deeply flawed human being. It’s a masterful performance by DiCaprio, who is able to capture both facets of this man, both the incredible genius and charisma as well as the legendary mental and emotional instability. As Hughes, DiCaprio frequently repeats sentences over and over, unable to let the particular phrase go. DiCaprio is assisted greatly here by his entire supporting cast, notable Blanchett, who won a well-deserved Oscar for her portrayal of Hepburn.

The film also notably won Oscars for art direction and cinematography, and it deserved both. To achieve the look he was going for, Scorsese digitally recreated the film to look as if it had been filmed with the processes available at the time each scene was taking place. The color frequently looks off—and this is intentional, because it is intended to (for instance) duplicate the two-strip Technicolor process, which made greens look a bit bluish. It’s subtle, but it adds a fascinating element to an already fascinating film.

I’ll say this now—if I wasn’t a fan of Leonardo DiCaprio, I would be after watching this film, because it might be the best one of his career. If I wasn’t already a huge fan of Scorsese, this is the sort of film that would put him in my top five directors. I’ve complained recently about films that run too long for their subject, but The Aviator reminds me that no really great film is ever too long. This one has a running time of just under three hours, and it doesn’t feel like it. It could have run another hour, and I wouldn’t have noticed or complained.

Why to watch The Aviator: One of the best biopics ever made.
Why not to watch: Insanity can be very disturbing.
Posted by SJHoneywell at 11:26 PM