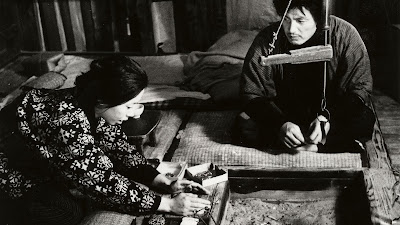 There are certain films that strike me at strange moments in my life. Suna no Onna (Woman in the Dunes) is such a film. The life it depicts is terrible, brutish, and filled with mindless work, and yet it also depicts a sort of surreal beauty. Parts of this film remind me of the more beautiful sequences from Solyaris, although since this film came first, it should really be the other way around, shouldn’t it?

A nameless school teacher (Eiji Okada) is an amateur entomologist. He has taken a short vacation to a windswept and (he thinks) deserted beach area to hunt for bugs. This goal is to find a new variation of tiger beetle, which would get his name in future guidebooks and field researcher notes. On his first day there, he relishes in the relative freedom away from Tokyo, but lingers too long and misses the last bus back to town. The people who live in the area arrange for him to stay with a young widow (Kyoko Kishida) who lives in a dilapidated house deep in a sand pit. She feeds him and he sleeps while she spends the night digging her house out of the sand.

It isn’t until the next morning that the man realizes that he was let down into the pit by a rope ladder anchored at the top. He’s trapped in the pit, because the sand walls are impossible to climb. His immediate thought is for escape, particularly when the details of this new existence become known to him. The local villagers have essentially kidnapped him. He and the woman are trapped at the bottom of the pit and must dig sand nightly for the village leaders to sell. Additionally, should her house and sand pit fill in, it would put the other houses at risk. Food and water are lowered down to the couple weekly to ensure their survival.

The man learns that the woman’s husband and child were buried in a sandstorm, and their bodies remain undiscovered somewhere nearby. She and the villagers fully expect that he will remain with her permanently, assisting her with the sand digging and for all intents and purposes marrying her. He continues to plot his escape (even getting out of the pit at one point only to be trapped by his own ignorance and returned), but slowly falls under the spell of the woman.

Similarly, the sand itself has a particular power in this film. Director Hiroshi Teshigahara shows frequent shots of the sand moving and flowing like water. It both emphasizes the power of the sand and indicates the sand’s beauty. These scenes are hypnotic and gorgeous.

Suna no Onna is filmed in black-and-white, and this is another film that would be in no way enhanced by being in color. In fact, color might well ruin the effect this film has. The cinematography instead gives us a world that is truly black and white. Each day, the man and woman either survive or do not. The sand is removed or it is not. Their existence is as focused and as simple as the film stock. And yet, like any good black-and-white cinematography, there is great depth in what we see, and in what they experience.

I do not know what attracts me to this film. It is very slow, even plodding at times. There is not a great deal of plot throughout; only the continued attempts to master this brutal landscape and the constant flowing of sand. It would be easy to compare their existence to that of Sisyphus, who endlessly pushed the same boulder up a hill only to have it roll back down on him every time. Their constant battle against the blowing sand bears similarities to this. But not entirely. There is more here than just the struggle, and that little bit more is what makes the film so captivating.

I expected to find this interesting. I did not expect to find it as compelling as I did.