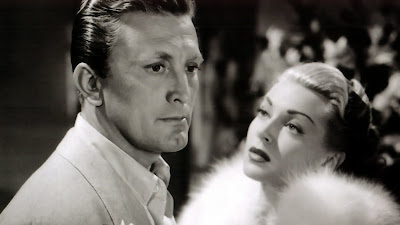 There’s a particular type of film that is told from the back end forward. It’s always an interesting writing decision and directorial decision to essentially let the audience know the basics of how the story is going to end, or at least the point that we’re going to come back to in an hour or so. The Bad and the Beautiful starts this way, and this is a film in which the thought of starting at the end actually makes good sense.

We’re introduced to a trio of people refusing to speak with a man named Jonathan Shields. One is Fred Amiel (Barry Sullivan), a successful film director. The second is Georgia Lorrison (Lana Turner), one of the most popular leading actresses in Hollywood. The third is James Lee Bartlow (Dick Powell), a highly-sought-after scriptwriter. None of them will take the man’s calls. All three are brought into the office of Harry Pebbel (Walter Pidgeon), who asks the three to relent. The crew then talks about their history with James Shields, one of the most powerful men in the movie business.

We learn about Fred Amiel first. When Shields’s father dies, the man was so hated that Jonathan had to hire extras for the man’s funeral. One of those is Fred Amiel, who works as an extra at times and also works behind the camera. The two end up becoming friends and starting their own company and go to work for Harry Pebbel, producing (Jonathan) and directing (Fred) poverty row pictures and cheapies, but getting something actually out of them and turning out interesting films. But then, at the moment of their big break, Jonathan gives Fred’s script to another director, cutting his friend out of his moment of glory.

Georgia began life as the alcoholic daughter of an alcoholic star. Slumming around Hollywood for bit parts and a little male companionship, Georgia is a wreck. But it’s Jonathan who saves her, and makes her into a star. That he does so by letting her think he has fallen in love with her and stringing her along to get the performance he needs from her before letting her go.

And then there’s Bartlow, who Shields brings out to Hollywood to write the script of the book he’s just written. Bartlow is plagued by a Southern belle of a wife (Gloria Grahame) who interferes with his work and spends all his money. To get the script he wants, he sends her off with one of his stars, who proceeds to get both him and the Southern belle killed in a plane crash. But Bartlow’s career is made.

And then we’re back to the start. Shields is looking to get a new start in the film business, and wants this group of people to work with him. Will they or won’t they? Will they continue to hate him for the lies and the deception, or will they decide that for as much as he did wrong, he also did right and helped make them who they are? It’s a decision that we understand at a greater depth at the end of the film, and the decision the three characters make says as much about them as it does about Jonathan Shields.

This is another case where I probably saw the movies in the wrong order—I should have watched this before I watched The Player, because there are some real similarities here, although without the whole murder/crime/cover-up/vengeance angle. But this is a film that is very much about the dark underbelly of the Hollywood system and the star system. And at the same time, this is a film that is simply about success and business. Apart from the glamour, this story wouldn’t be that different if it took place in the steel industry or advertising or book publishing. It’s a story of success by any means, failure on the grand scale, and people who are very good at what they do, but who are not always very good at being people.

Of all of them, I suppose I have a certain level of sympathy for Amiel and Bartow. Amiel trusts Shields to help his own career as much as he will help Shields, and Shields sells him out at the first opportunity. Bartow treats Shields like a friend, and loses his wife because of it, because Shields wanted the script more than he wanted Bartow having to deal with his wife’s distractions. And yet, even there, my sympathy is tempered. Even more, I don’t have much sympathy for Shields himself. He’s ruthless in getting what he wants, vicious, arrogant, and heartless when it serves his purposes.

While there is certainly a plot here, this film serves more as a character study than a plotted story. But, it’s one hell of a character. Minnelli might be better known for musicals, but The Bad and the Beautiful shows that he wasn’t limited to them.

Why to watch The Bad and the Beautiful: Can Hollywood ever really be skewered enough?
Why not to watch: It’s really difficult to sympathize with assholes.
Posted by SJHoneywell at 9:38 PM