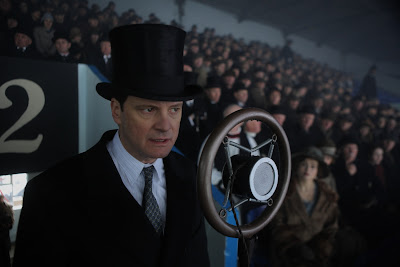 It’s a well-known Hollywood trope that the quickest way to an Oscar nomination or win is to portray someone with a significant flaw or defect, especially one that is obvious or measurable in some way. In fact, I accused the makers of Shine of this about a week ago on this very blog. You can’t go too many years in a row without finding someone winning a gold statue for portraying someone with a severe mental disability or significant physical handicap. This makes The King’s Speech rather interesting, because it both follows this formula and flaunts it.

Albert (Colin Firth) has a speaking problem. Normally, this wouldn’t be noteworthy except for the fact that in this case, Albert is the Prince of Wales, son of King George V of England, and is thus forced to speak in public on many occasions. His crippling stutter, though, makes this a difficult proposition at best, and the source of incredible fear at worst.

We see such a speech at the beginning of the film, and it is painful. As he gets through his address word by painful word, the level of discomfort of the audience becomes palpable, particularly that of his wife, Elizabeth (Helena Bonham Carter). He has attempted every speech teacher available, all with no results; his stutter essentially keeps him silent in many situations. That is, until Elizabeth encounters Lionel Logue (Geoffrey Rush), an unorthodox teacher who may be able to help.

This really is the essential plot of the film—one man overcoming a crippling stutter to become a beacon of hope and strength for the nation during World War II. We learn a great deal of what may have caused the stutter—painful corrective measures when he was a child (such as forcing him to use his right hand instead of his natural left, leg braces to correct knock knees, etc.), a brutal nanny, and an overly stern father appear to be the main culprits. And for the most part, this wouldn’t even be a story of anything other than a man with a stutter except for actual historic events.

You see, Albert’s older brother was King Edward VII (Guy Pearce), the king who abdicated the throne so that he could marry two-time American divorcee Wallis Simpson (Eve Best). And, with no heir, Albert is suddenly thrust into the position of being King George VI of England, stutter and all.

The various speech exercises are fascinating, and they bring out interesting ideas. For instance, early in his sessions, he has music played over headphones while he reads aloud from Hamlet, and discovers that he doesn’t stutter when he can’t hear himself or isn’t concentrating on his speaking. We learn that he can speak without stammering when he is angry or swearing, or when he is singing what he says to a familiar tune.

Firth plays Albert/George VI with humility, warmth, humor, and tremendous dignity. He is, of course, embarrassed by his stutter, but he is also a king, and has had a royal upbringing. He is stiff and formal, and thus balks when Logue insists on calling him Bertie and being referred to in turn as Lionel. But there is great candor in the man, and a true wit that often turns itself back on Albert himself. Firth’s performance, Oscar bait or no, is the heart of the film, and pitch-perfect. Too familiar, and we wouldn’t believe him as the king. Too stiff, and we wouldn’t care about the trouble he faces.

And, of course, a lot eventually rides on that speech. The speech in the title of the film is the address given by King George VI at the beginning of World War II. And it is pure propaganda, and I mean that not derogatorily, but as a simple fact. Royalty in England hasn’t really had an official function in centuries other than symbolic. George VI wasn’t the true head of the government, nor was he anything more than the figurehead of the Church of England. He wasn’t the brains or the muscle behind the government.

Instead, he is in many ways the soul of his people. If the speech does not inspire confidence and great will, in many ways, the war is being lost. It is, in all manner of speaking, a moment of truth.

Overall, this movie is excellent. I haven’t seen every major release from last year, but I do see why this was nominated for the number of Oscars it was. Many people tell me that there were other, more deserving films--The Social Network and True Grit being the ones most frequently named. I haven’t seen either one, so I can’t comment at this point, but this certainly wouldn’t be the first time that a good film won out over a couple of great ones.

If I have a complaint, it’s in the casting. Guy Pearce is seven years younger than Colin Firth and looks 15 years younger, but is playing the older brother here. I flat out don’t buy it. I wouldn’t change the casting of Firth simply because he was so good at the role. But Pearce’s part is far smaller, and an actor who looked the role a bit, or at least looked the same age as Firth would have been a more solid choice.

Still, this is a worthy watch. I liked it, and would watch it again if only to see a king go on a short rant of profanity.

Why to watch The King’s Speech: For all the hype, it really is very good.
Why not to watch: In years to come, we’ll wonder why it won Best Picture over other contenders.
Posted by SJHoneywell at 9:32 PM