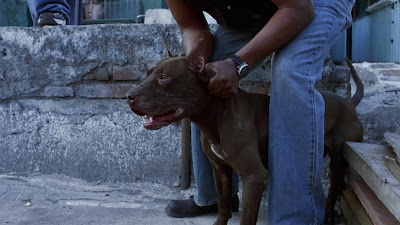 My podcasting partner, Nick Jobe, has a tendency to make me watch movies that don’t make any sense until the very end. One of these days, based on the fact that he’s done that to me more than once, I’m going to make him watch Amores Perros (Love’s a Bitch) just to get him back. I’ve no doubt that Nick would enjoy this movie, or at least parts of it, although he’d likely object to the 150-minute plus running time. But Nick seems to like movies in which a random series of events conspire to bring a divergent group of people together in the same place at the same time.

Our first story concerns Ramiro (Marco Perez), who works in a grocery store and also commits robberies with a friend. He is married to Susana (Vanessa Bauche), with whom he has a child. Susana is pregnant again and is terrified to tell Ramiro, who is brutal and abusive. Ramiro’s brother Octavio (Gael Garcia Bernal) lives with them, and he is desperately in love with Susana. To convince her to run away with him, he needs money, and to get money, he gets involved in the underworld of dog fighting with his dog Cofi. As it turns out, Cofi is a natural and kills every dog he comes across, particularly those of dog trainer and incredibly violent human Jarocho (Gustavo Sanchez Parra). It would be too spoilerific to indicate precisely how the accident happens, but it’s Octavio in the car with his dog and his friend Jorge (Humberto Busto).

We move on to the story of supermodel Valeria (Goya Toledo), who is in the other car. Valeria is on the top of the world when we begin her story. She has a great modeling career and, more important for her, her boyfriend Daniel (Alvaro Guerrero) has left his family and gotten them an apartment together. But the accident is serious and has caused a great deal of damage to her leg, and may permanently end her modeling career. Worse, the apartment is in bad shape, and Valeria’s dog Richie disappears under the floorboards. The accident and the disappearance of the dog create a great deal of tension in the relationship, and expose the problems of the couple.

The final story concerns a vagrant named El Chivo (Emilio Echevarria) who pushes a cart down the street followed by a pack of mongrel dogs. In reality, El Chivo is an accomplished hitman, who is hired to kill a businessman’s partner. El Chivo witnesses the accident at the start of the film, and finds the wounded dog in the backseat of the car, and carries it off, not realizing that Cofi the dog is a trained killer. And, of course, he has to deal with the fact that he’s been hired to kill someone despite trying to go straight. He also has to deal with his estranged daughter, who he abandoned when she was two.

Throughout the film, we get small pieces of the other stories. For instance, we see what happens with Ramiro and a failed bank robbery during the third story as well as the resolution of the relationship of Susana and Octavio. However, each portion of the film deals primarily with the story of the moment.

None of these stories is happy or pleasant, but it’s worth noting that each of them takes place in a different socioeconomic level. Each of them contains a certain level of violence or at least physical pain, and each contains unpleasantness as regards the canine companions of our main characters. Two of the stories ultimately end on a down note, the third ends ambiguously. Love, whether romantic love or the love of a parent for a child, truly is a bitch.

I am glad to have watched this film, but I would be hard pressed to say I enjoyed it. This is an unrelenting movie that only rarely offers a respite for the watcher from someone’s real physical or emotional pain (or both), and at a length of well over two hours, when the movie does finally end, you’ll be ready for it. It’s something of an emotional wringer, but it’s one worth going through.

Why to watch Amores Perros: All three stories could be their own film.
Why not to watch: Dog fighting is ugly.
Posted by SJHoneywell at 8:20 PM