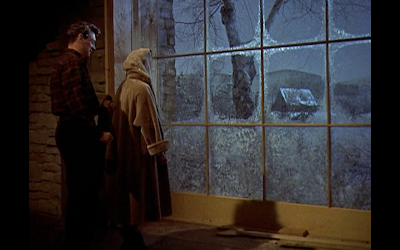 There are moments when old films become unintentionally hilarious. In All That Heaven Allows, that moment comes at almost the exact middle of the film. In the scene, Cary Scott (Jane Wyman) is riding in the car of the younger Ron Kirby (Rock Hudson). The two are talking of their impending marriage, and of breaking the news to Cary’s two children. Cary is naturally worried about what her kids will say, and Ron tells her that it won’t be a problem as long as she is brave. It’s a lesson he taught his friend Mick in the war—that sometimes you simply have to be a man. And Cary responds by saying, “And you want me to be a man.” Knowing that Rock Hudson, despite his frequent romantic leads was gay made this brief scene hugely comic for me. I’ll admit that it broke the mood despite my best intentions not to let it do so.

All That Heaven Allows is a piece of 1950s romantic melodrama in which the villain isn’t a sneering industrialist or top-hatted creep, but all of us. We’re the bad guys in this film—you and me, and that person sitting over there.

Cary Scott is a relatively young widow with two children. We don’t learn why she is a widow, nor do we learn how long she has been one. Her son Ned (William Reynolds) is at college, but comes home on the weekends. Her daughter Kay (Gloria Talbott) does social work and speaks in a way that, had it been ten years later, would sound like the beginnings of radical 60s-isms, quoting Freud and railing against the roles of women in society. When the kids aren’t home, Cary has a moderately active social life that consists of cocktail parties and club lunches with the other women in town. In the evenings, she is sometimes squired around by Harvey (Conrad Nagel), who has a mild and passing romantic interest in her.

But then Cary notices Ron Kirby, who is tending the trees in her yard. He’s young, he’s attractive, he’s well built, and he’s got a deep manly voice. Cary is naturally interested in her, and while she’s older, she’s still quite attractive, so the feeling is mutual. Ron and Cary become something of an item, but quietly, since this is essentially dating the help, and the well-to-do in this quaint little town simply don’t do things like that.

Eventually, though, the two fall madly and passionately in love with each other, an event that is spurred for Cary by her meeting Ron’s friends Alida (Virginia Gray) and Mick (Charles Drake). It’s here that Cary learns of Ron’s philosophy of being his own man and being happy in his own way, and not really caring much for the opinions of those people he doesn’t care about. 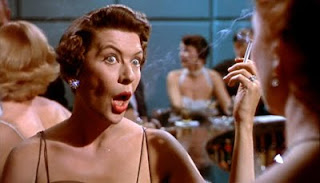 Ah, but this is the problem. Counseled by her friend Sara (Agnes Moorehead), Cary brings Ron to a social gathering, where their relationship suddenly becomes the talk of the town. Everyone, it seems, is small-minded and petty, and can’t get over the fact that a wealthy widow like Cary would have anything to do with a tree farmer and gardener like Ron Kirby. There are snide accusations and the sort of cruelty-masked-by-surface-pleasantries that only the best bred of us can manage with a straight face. This cause célèbre is led by the town gossip and evil wench Mona Plash (Jacqueline DeWit).

But the problems aren’t limited to the neighbors and upper crust of society. Ned reacts badly to his mother’s romance with Ron, thinking that she has disgraced his father’s memory, and adamant that she cannot sell the house that has been in the family for generations. Kay tries slightly harder to understand, but is destroyed emotionally when she overhears others in town talking about her mother and accusing her of having an affair with Ron before her husband died.

The path this movie takes is a pretty obvious one, and while the ending has a few bumps in it for our star-crossed pair, it doesn’t come as too much of a surprise. There’s a particular choice we want our loving couple to make, and it’s a fairly good bet that we’ll get there eventually, even if the road gets a bit rocky.

All That Heaven Allows is a tough film to judge simply because it is so damnably predictable. It’s difficult coming at it from this perspective to know if it is simply predictable on its face or if this is because so many other films have traveled the same exact path after it. The whole point of the film is idea of social oppression, of caving in and marching with the beat of the rest of society, of the comfort in being a part of the group weighed against happiness. In short, it’s romantic melodrama at its most romantic and melodrama-y.

The saving grace of the film is Jane Wyman. Wyman’s face in this film tells the entire story—one can read whether a scene is happy, sad, tragic, or fraught with social peril simply by looking at how she reacts to the situation. Her face is empathetic and easily readable, and her performance benefits from this tremendously. Rock Hudson’s job here is to be large, manly, and to have a deep voice, three things that he was naturally talented at. Everyone else’s job is to be selfish and small-minded.

I don’t want to give a lot away here, because the film does follow a pretty obvious path, but there are some things done very nicely. The section of the film before the end concerning Cary with her children at Christmas is still very effective and powerful, as it highlights the relationship Cary has with her children, and their own particular selfishness. This scene elevates the entire film, and as with much of the rest, it is Wyman who does the elevating.

Why to watch All That Heaven Allows: The lessons of society still need teaching now and again.
Why not to watch: Sometimes, that teaching can be heavy-handed and trite.
Posted by SJHoneywell at 10:49 PM

Email ThisBlogThis!Share to TwitterShare to FacebookShare to Pinterest
Labels: All That Heaven Allows, Douglas Sirk, romance