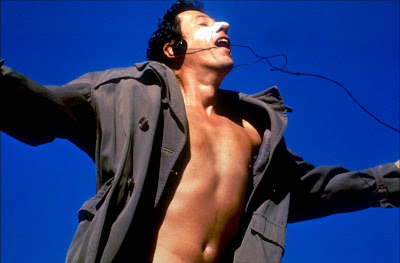 David Helfgott had talent. At a young age, he was a musical prodigy taught by his father. But, according to most accounts, his father was tyrannical, allowing for no deviation from a set path and no ability to walk away from his own particular view of the world. David Helfgott rebelled from his father, pursued his own genius, and was crushed by it, becoming a broken shell of a man lost in his own world until others rediscovered his genius and worked to bring him back. Or, at least that’s the story that we see in Shine.

And that’s really the story. There isn’t a massive amount of plot here—talented young man is broken and the shattered pieces are slowly formed back together into broken man who finds a way to continue forward. Instead, this is a character study of Helfgott and his life, and in the adult years, his mania and his manic personality. The real man has been diagnosed with schizoaffective disorder, sort of like bipolar with breaks from reality.

Helfgott (Geoffrey Rush, in his first major film performance), according to the film (and presumably in life), cannot help but speak nearly constantly, rambling on with word associations leading down winding paths. He is, perhaps, his own unique position on the autism spectrum, his mind and mouth going a mile a minute.

We get the full story, starting in Australia, seeing young David (played initially as a child by Alex Rafalowicz) losing a music competition, but being discovered by a local piano teacher named Rosen (Nicholas Bell). As he continues to play and improve, David is offered the chance to attend school in the U.S., but this is stopped by his father (Armin Mueller-Stahl), but rescued emotionally by co-founder of the Australian Communist Party, Katharine Susannah Prichard (Googie Withers). When David is invited to study at the Royal College of Music in London, he goes against his father’s wishes, and his father disowns him.

Once there, David (played as an adolescent by Noah Taylor) competes with Rachmaninoff’s 3rd Piano Concerto, a piece known for its brutal difficulty. He owns the piece, lives it, but the performance breaks him completely, sending him to a mental institution and shock therapy. Eventually back in Australia, he is institutionalized again in part because he has nowhere to go—his family essentially doesn’t recognize him due to pressure from his father. He is rediscovered by a worker at the institution, and slowly comes back to playing, eventually marrying an astrologer named Gillian (Lynn Redgrave) and performing in concert again. Yeah, that’s a spoiler, but it’s not much of one.

What’s fascinating here is that the real story is actually more unbelievable than the film—he was actually rediscovered in a bar by his own brother. But no matter.

There are a couple of important points that need to be made here. First is that the real reason to see this film is not for the story, but for the performances. They are truly astounding. Geoffrey Rush speaks a mile a minute through the film, constantly mumbling and muttering, off in his own world and his own place. It’s a great performance, and one that won Rush a number of awards including an Oscar and a Golden Globe. It seems, though, that the performance of Noah Taylor got lost in the shuffle here. Rush is asked to portray the broken man on his journey back, which is admittedly impressive. Taylor, though had the unenviable task of portraying the man as he breaks, which I think is much more difficult. Taylor seems forgotten here, which is a damn shame, because what he brings to the film is easily as much as what Rush brings.

The other thing is this--Shine is a film that seems naturally made to win awards. It’s the same sort of film as A Beautiful Mind and a couple hundred others about individuals broken by life and talent and madness who find a way back to something by the end of the film. I can’t say that it’s boring, but I can say that it wasn’t too long into the film that I was pretty sure where we were headed.

Is it good? It is, but it’s good strictly because of the performances here. While the story is interesting, it’s a story you’ve almost certainly seen before with a different cast of players and a slightly different mental defect. Other than that, this film, while not forgettable, doesn’t specifically distinguish itself from other films that tread essentially the same ground.

Why to watch Shine: The music, the performances, and the musical performances.
Why not to watch: How many movies about broken geniuses do you need to see?
Posted by SJHoneywell at 11:54 PM