Ghost of Sweden Past 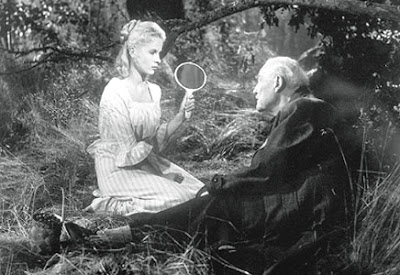 As we get older, our memories get longer. That’s simple fact, and one that I’m reminded of, since my birthday is around the corner. Every day, we have more memories, and every day because of that, there are new possibilities in the world around us to bring up old memories and return them to the fronts of our brains. Smultronstallet (Wild Strawberries) explores this idea in depth in the guise of a drive taken by an elderly gentlemen, his daughter-in-law, and some hitchhikers.

Isak Borg (Victor Sjostrom, who directed the interesting Korkarlen) is about to be honored by his university for 50 years of service. It’s a big moment in Borg’s life, but he’s having trouble finding someone to share the moment with. His wife is dead as are all his siblings, and his mother, while still alive, is ancient. His housekeeper Agda (Jullan Kindahl) would like to accompany him, but does not want to drive all the way to the ceremony, and is thus crabby.

However, he won’t take the drive alone. His daughter-in-law Marianne (Ingrid Thulin) who is visiting him, and experiencing some level of trouble at home, has decided to accompany him to his ceremony and to return at least temporarily to her husband. And so the two set off. It’s evident to Isak that Marianne is not too fond of him in part because his son, her husband, and he are far too much alike.

The pair stop at a place where Isak lived when he was much younger, and he slips into a reverie in which he essentially floats back to an important day in his past. While everyone in his memory is has he remembers them, he is still the old man of his present day. It is here that he discovers his first love, Sara (Bibi Andersson) was truly in love with his brother Sigfrid (Per Sjostrand), and that she will eventually run off with this younger brother. Returned to the present, Isak discovers a trio of travelers headed to Italy, and he offers them a lift for as far as they are going. As a reminder of his past, the girl in the group is named Sara (and is also played by Bibi Andersson).

Such reveries happen multiple times. We meet a quarreling couple who remind Isak of his own failed marriage and his wife’s infidelity. We also discover the truth behind what is going on with Marianne; she is pregnant and going to leave her husband because he does not want the child. Through all of this, Isak attempts to make sense of his current life, his loneliness, and the events of his past.

In a way, the film is sort of like a Swedish version of A Christmas Carol, or at least the parts featuring the ghosts of Christmas past and present. Isak learns of his own past crimes, of his guilt that he carries through life as well as the effects his own life has had on the people around him. In part, the reason his son’s marriage is breaking up is because his son does not want his life to mimic that of his parents. In one of the more interesting sequences, Isak’s subconscious puts himself on trial in which he is accused of guilt. The results of the trial never really come out, because he is awakened.

Bergman’s work often skirts into territory normally reserved for horror. While there are no slashers or bugaboos or things jumping out of cupboards, there is a sense of despair in his work, of the intense and constant pressure of existence in the world. Bergman’s films, at least in my experience, plunge the characters into places of despair and deep existential pain. Isak Borg is no different from these characters going through a crisis of the soul—in this late stage in his life, he is reaching the same point. Essentially, Borg has not yet come to terms with either his life as he has lived it or with his eventual death.

It’s a strange film, and one worth exploring. I’m not sure I groked the whole thing, and I probably need to watch it again after I’ve had some time to let it settle. Right now, I don’t think I can call it a film I’ve either loved or hated. I appreciate it, and for the moment, that’s going to have to do. I think I like it, but I’m not sure if I actually like it or if I simply feel obligated to like a film that has such an impeccable pedigree.

Why to watch Smultronstallet: Well, it’s normally considered one of Bergman’s great films.
Why not to watch: It’s hard to tell whether it’s actually enjoyable or not.
Posted by SJHoneywell at 11:56 PM