One of the more fascinating cultural experiences I’ve had in the past several years is attending a Hindu wedding. I don’t know how traditional it was—it may very well have been Westernized in some ways, and the reception was very Western in a lot of ways. As for the ceremony itself, I don’t remember a lot. This isn’t because I wasn’t paying attention, but almost because I couldn’t. The bride, my older daughter’s first grade teacher, recommended to us that we bring a deck of cards for the actual ceremony. We weren’t seated close (not being family), and it was quiet and extremely long. I remember we were served ice cream in the middle. 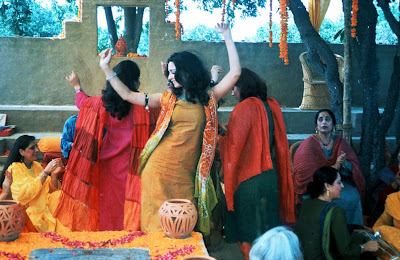 Mira Nair’s Monsoon Wedding offers in some ways a very similar experience. In one important way, this film is badly misnamed—we never see the actual wedding. We get the build up to the wedding, we get the family insanity that goes around the wedding, we get infidelity, family secrets, random almost-couplings, fights, tears, a lot of singing, and what looks like one hell of a great reception, but no wedding.

This is a film with almost too many plots to get into, so I’ll stick with a couple of the major ones. Young Aditi Verma (Vasundhara Das) has been promised in marriage to Hemant Rai (Parvin Dabas), a man she has never met. This is problematic, since she is currently involved in an affair with a married television personality named Vikram (Sameer Arya). Now the whole family is gathering in Delhi for the big event, and tempers, past insults and crimes, and a few current crimes surface. Along the way we discover that Aditi’s father Lalit (Naseeruddin Shah) is having cash problems because of the wedding. There’s additional turmoil in the family better left unspoiled here. And the wedding planner, P.K. Dubey (Vijay Raaz) has fallen madly in love with the Vermas’ servant, Alice (Tilotama Shome), and is thus unable to concentrate.

Nair doesn’t show us the wedding, because ultimately, the wedding is unimportant. It’s everything else that truly is important here. This film isn’t about the value of an arranged marriage over the sort of relationship Aditi had with Vikram. It’s not about the power of marriage or the importance of marriage. Rather, this film is about family, about love and about the strength and power of tradition even in the face of an ever-changing world.

For me, there are three real emotional centers to this film. First is Lalit Verma. While it is his daughter who is being married, the film is much more about him than it is Aditi. For him, as well as for his wife Pimmi (Lillete Dubey), this marriage means not so much gaining a son as truly losing a daughter. Hemant lives in Houston, which means that after the wedding, Aditi will leave Delhi, leave India, and live on the other side of the planet. For Lalit, this wedding is both everything and a loss of everything—money included, but mainly his daughter. His resistance through much of the film is there to cover this deeper fear of losing his little girl.

Second is the relationship between Dubey and Alice. Their romance is unarranged and happens naturally in the course of the film. It is sweet, almost naïve, and ultimately charming. When Alice, alone in the course of her duties, tries on the wedding jewelry, Dubey’s men accuse her of stealing. It’s only Dubey, who is watching her with the eyes of a man newly and wholly infatuated, who understands the truth of her game of dress up.

Finally, there is Ria (Shefali Shetty), the daughter of Lalit’s deceased brother, essentially adopted into the household. Without giving too much away, Ria guards a dark family secret that eventually comes boiling out the night before the wedding. Her role is a thankless one in the family—she’s a sort of spinster cousin—but she is in many ways the emotional core of the entire clan. Her scene with Lalit at the end of the film as well as the one that follows it, are the two moments in Monsoon Wedding that turn a well-made movie into cinema.

What surprised me here was a general lack of humor. I expected this to be very much a Hindi-language version of My Big Fat Greek Wedding, and it is anything but. There is some humor here, but the humor is there simply to temper the drama. While the film ends on a massive uplift, overall, this is not the laughfest you might expect.

But it is good. It is very, very good. It is beautifully filmed and nicely paced, and despite the massive cast, it does not become confusing or difficult to follow. I’ve checked this film out from the library before and simply never got around to it. Now I wonder why.

Why to watch Monsoon Wedding: A slice of real life that cuts deeper than its surface topic.
Why not to watch: Family dramas have a way of being more painful than others.
Posted by SJHoneywell at 11:51 PM