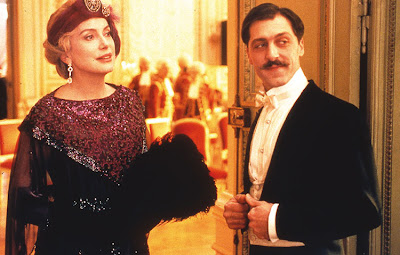 I know nothing about the works of Marcel Proust. I know him only by reputation, and even with that I don’t know much. So I was interested in Les Temps Retrouve (Time Regained, which is based in large part on both his life and his work. I want to be clear on this, because allegedly, this film is one of the most accurate in terms of adapting the feel of Proust, but I have no way of knowing this. It might be perfect and it might be miles away; I have no way to tell.

The film picks up in the early 1920s with Proust on his death bed. As he fades away into that long good night, he looks over old photographs from his life with the aid of a magnifying glass, remembering names and places. And like that, we’re back in his memories, seeing his life as he remembers it, almost as if he is in the last moments of his life and seeing these memories flashing by before his eyes.

What makes the film interesting is that (evidently) his actual memories begin to blur with his writings, creating a sort of surreal pastiche of history and fiction. His characters essentially become the people in his life, or the people he knew become characters in his books. There is a dreamlike quality to much of the film as it switches from scene to scene with little regard to any specific order or time, although a huge portion of the film takes place during World War I. For Proust, or at least the narrator within the film who is representing Proust, this is a wash of parties, meetings, lovers, and a substantial amount of homoeroticism.

Bluntly, I was really looking forward to this movie in part because I didn’t know anything about it or what to expect. And from a technical level, it is one of the prettiest films I have ever seen. The soft focus in places contrasted with some intensely crisp images, the shockingly bright lights that wash out a great deal of the scenery, all of this gives the continual impression of dream or reverie—certain details are distinct and in sharp focus while others are faded and fuzzed by distance through time. So, from a purely artistic standpoint, it is truly something special.

And yet I find myself almost entirely unable to recommend it, at least as I saw it. It’s not often that I let the technical aspects of how I saw a film affect my opinion, but this film contains, bluntly, some of the worst subtitling I have ever seen. I’m not talking about the accuracy—these subtitles aren’t in Engrish. The problem is far more significant. A significant number of the subtitles are simply unreadable.

What I mean is that the subtitles were white text. Frequently, they were placed against a completely white background. Two characters sit at a table talking. The table is covered in a pure white tablecloth further washed out by the extreme lighting to give the scene a dreamlike quality. And the subtitles are the same color as the background. Frequently, and this is a much larger problem at the start of the film, there are entire blocks of conversation that are simply unreadable, and to a non-Francophone like me, complete gibberish. The people could be talking about the war, or their relationships, or the food they’re eating. I’ll never know unless I watch this film again with someone who is fluent in French.

As I said earlier, I try very hard not to let the technical aspects of a film affect my opinion. I’ve dealt with skipping discs, bad prints, and being forced to watch internet video for some of the rarer films I’ve come across, and in each case I have done my best to base my opinion of that film on the film itself and not the encountered problems. But here, the film and the issues cannot be separated. This isn’t the fault of the disc or the player or the medium, but of the actual producers of the disc itself. I cannot imagine someone creating this subtitling, seeing it play white text over the same color background with no contrast, and approving it. It’s lazy and it’s cheap, and we as fans and devotees of film deserve better.

And so, I don’t know what I think about Les Temps Retrouve. I’d love to say it’s a beautiful film that carries its dreamlike quality through successfully. It is pretty. But because the subtitler couldn’t be bothered with a closed-caption box or putting a black outline around the text, I have almost no idea what the bloody hell was going on.

Why to watch Les Temps Retrouve: It’s beautiful and dreamlike.
Why not to watch: You’ll miss a third of it if you don’t speak French.
Posted by SJHoneywell at 10:47 PM