It’s currently in vogue (it’s actually always in vogue) to complain about remakes these days. It’s especially egregious when remakes happen almost immediately. This is something that happens in Hollywood these days—a foreign film grabs an audience, so the film is repackaged immediately with an American cast. For a few years, this was the thing to do with Japanese horror films like The Ring, The Eye, The Grudge and Pulse. For the last couple of years, it’s been Sweden, with Let the Right One In and The Girl with the Dragon Tattoo. The most egregious example is the 2010 African-American reimagining of 2007 Caucasian-dominated Death at a Funeral. 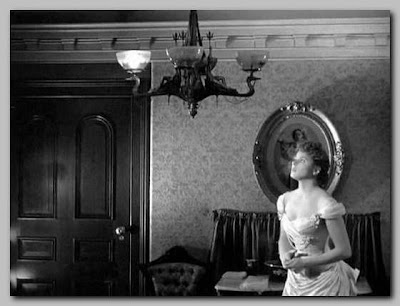 The funny thing is that this is not a current problem. It has existed for years. When someone says The Maltese Falcon, you almost certainly think of the one with Bogart made in 1941. You probably don’t think of the earlier film of the same name (1931) or Satan Met a Lady based on the same story from 1936. Hitchcock made two versions of The Man Who Knew Too Much and De Mille made The Ten Commandments twice. So it’s not too shocking that 1944’s Gaslight is a remake of a film from just a few years earlier.

I didn’t know what to expect going into this film. I knew from the start that Gaslight is a costume drama set in the Victorian era, which meant a lot of petticoats, giant ruffles, and posh dudes with elaborate coats. I don’t dislike period drama as a rule, but Victorian stuff seems to wash over me for some reason. It’s still oldish and a bit goofy, but desperately wants to be seen as modern. Victorian stories are sort of the awkward teens of literature, and so I tend to feel the same way about movies set in the period.

Gaslight is a period piece, but it seems to fall directly into the heart of film noir. Interestingly, I also seem to be experiencing a bit of a theme related to insanity lately, since that’s what I’ve been watching lately. Gaslight digs deeply into this idea of insanity in its characters, although it does so in a way very different from other films from the past few weeks.

Anyway, a famous singer named Alice Alquist is murdered, and the case goes completely unsolved. Her niece is sent away from London and packed off to the continent to receive vocal training. All of this happens in a few moments. As the film starts, we see the grown niece, Paula (Ingrid Bergman), leaving her lessons and taking up with a man named Gregory (Charles Boyer). The two marry, and as a part of Paula’s inheritance, they take up in the house of her aunt, revitalizing it as soon as possible.

And then the strange things start happening. Paula begins losing things and forgetting things. At night, when Gregory leaves to go to his studio to work on his composing, she hears voices in the blocked off rooms above her, and the flames in the gas lights dim as if someone is turning them on elsewhere. Worse, no one else seems to notice—not her hard-of-hearing servant Elizabeth (Barbara Everest, and yes, her hearing difficulty is important) and not her personal servant, the cheeky Nancy (played by a very young, still baby-fat faced Angela Lansbury). And then there is the mysterious man (Joseph Cotten) lurking about. All of this seems to be conspiring to drive Paula mad.

I’ll be honest—I expected going in that this was going to be just another in the list of films that are decent but forgettable from the earlier days. Imagine my surprise when I found myself actually personally involved in how the film played out. It’s extremely engaging as a film, and Paula is a compelling character. So too is Gregory, who seems a devious mix between caring, compassionate husband and angry tyrant. I’m a huge fan of Joseph Cotten in anything he appears in, and he’s great here, too. When I say that his character (Brian Cameron) is actually a detective working for Scotland Yard wanting to reopen the original case, I’m not really spoiling anything—we find this out early enough. But, of course, Paula doesn’t know this.

If I have a complaint, it’s the comic relief character of Miss Thwaites (Dame May Whitty), the stereotypically prim, nosy neighbor who can’t seem to get enough of her neighbor’s dirt. She’s supposed to be an injection of wacky fun and silliness in an otherwise pretty dark and heavy film, but I can’t help but think that in general it would have been better without her. She does become plot important once or twice, but only in minor ways that could have been left out with little loss.

Still, disregard her. Gaslight is great fun, and Bergman’s speech at the end is truly incredible.

Why to watch Gaslight: Far more compelling than you would believe.
Why not to watch: Miss Thwaites is really annoying.
Posted by SJHoneywell at 8:13 PM