Sarah, Can You Hear Me?

Film: Children of a Lesser God
Format: Streaming video from NetFlix on laptop and rockin’ flatscreen. 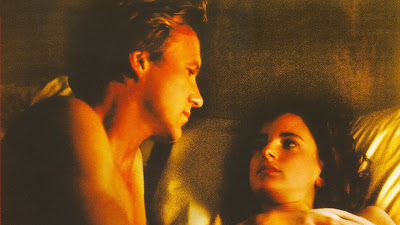 What’s up with all the romance lately? Honestly, I don’t know. I choose movies based on a variety of things—availability, mood, time, phase of the moon perhaps, and possibly bio-rhythms. Regardless, I have evidently been on a bit of a romance kick lately. Children of a Lesser God is a film I’ve almost started a couple of times and just haven’t, so it was time to finally sit down and watch it.

The story is pretty simple. James Leeds (William Hurt) is a speech teacher specializing in training deaf students to speak. He begins at a new school and initially has some success with the students, but for him, the challenge isn’t the kids, but the janitor, Sarah Norman (Marlee Matlin). A former student at the school, Sarah refuses to lip read and refuses to talk. But James wants to help her. More on this in a bit. Sarah is what can only be described as aggressively deaf.

But really, that’s the whole story. Their relationship starts rocky and stays rocky, even when she moves in with him. He would like her to talk. She doesn’t want to talk. They fight a lot, and there is a great deal of angry sign language.

Honestly, that’s the whole movie. It’s a pretty standard romance with the difference being that the woman is deaf and that the man is a teacher of deaf students. Remove that particular angle, and this is little more than a standard romance between two people who fall in love with each other but have some differences that they need to resolve. The main difference here is her identity has a deaf person. She wants him to accept her for who and what she is, but it’s pretty evident through the bulk of the film that she has no idea what she wants. She wants him to come into her world, but she won’t enter his—won’t even budge.

Matlin won an Oscar for this role, which was her first role of any kind in a film. I can’t say she didn’t deserve it, but a part of me wonders. Considering that she beat out Sigourney Weaver in Aliens, which has become an iconic role for women, one has to wonder if the award went to Matlin for that old Oscar thing of playing someone with a disability. The fact that Matlin didn’t have to act that part of the role doesn’t matter. Physical handicaps win awards in Hollywood.

So let’s get back to this idea of the caring James wanting to help the aggressive and angry Sarah. James, naturally, is portrayed as a wonderful teacher, the kind of teacher that seems to exist only in movies and is there mainly to inspire his students to become something greater than they are. If you’ve ever seen a movie that involves a teacher, you know the kind I’m talking about. And as a member of the audience here, I have no reason to disbelieve either the quality of his teaching or his desire to truly help Sarah communicate with the outside world. But, let’s be honest about this for a moment. A big part of the reason that James wants to help Sarah is that Sarah looks like Marlee Matlin. If she looked like Bella Abzug, we’d have a different movie on our hands.

I’m not sure if the deaf angle is actually that important here, which is a very smart move. In essence, deafness is simply what they fight about. It’s no different from anything else that couples fight about. What I mean is that couples fight, and this couple simply fights about her deafness. It could just as easily be his career or anything else. Sarah’s deafness is not so much a plot point as just a part of her character, and this is a smart decision.

Regardless of this, there’s not enough here to really get me excited about this film. It plays like a big budget After School Special in a lot of respects. Everyone should be able to be the person they want to be and each of us is special in our own way. I’m not sure I needed Marlee Matlin and William Hurt to tell me this.

Why to watch Children of a Lesser God: It’s interesting to see deafness brought to the big screen.
Why not to watch: You learned the moral of this story in first grade.
Posted by SJHoneywell at 8:56 PM