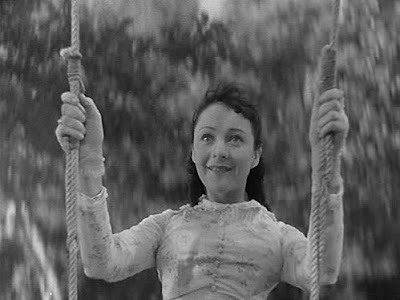 Few things in this world are sadder than an abandoned project. Jean Renoir’s short film Un Partie de Campagne (A Day in the Country) is actually not really a short film, but a portion of a film he never completed. While this does tell a complete story, it tells it incompletely in many ways. It’s difficult to tell if the start of this film is the actual envisioned start, or if the ending here is the real ending Renoir wanted.

A family group heads to out to the country to spend a day. For the, the country is a huge change from their daily life in Paris. The country folk, on the other hand, are not too enamored of the Parisians, often wishing they would simply go away. But today is slightly different. The family consists of a Monsieur Dufour (Andre Gabriello), a businessman; his wife (Jane Marken); and their daughter, Henriette (Sylvia Bataille). Also along for the trip is an ancient, deaf grandmother (Gabrielle Fontan) and the promised husband of Henriette, Anatole (Paul Temps). Anatole, we are to learn very quickly, is something of a simp, and evidently quite a bit older than his betrothed.

Sitting along the river bank are two boaters named Henri (Georges D’Arnoux) and Rodolphe (Jacques B. Brunius), who immediately set their minds on the non-grandmotherly pair of women. Rodolphe, who sports mustaches so impressive that he wears a guard for them when he eats, initially has designs on Henriette, looking for a bit of fun and assuming that there will not be any consequences of such actions. They create a meeting for themselves and the women, and then, after the family has eaten, provide M. Dufour and Anatole with fishing poles, and offer to take the ladies out boating.

That’s really the whole film, although being alone with a strange man in the wild forests near a river bank certainly seems to make Henriette willing to (ahem) give of herself to Henri, for it is Henri and not Rodolphe that seems to catch her fancy. Rodolphe, initially rebuffed in his advances toward Henriette, determines to woo the older woman. While we learn of the success of Henri’s actions, we’re never really sure if Rodolphe sealed the deal, to use something like the common parlance. And that’s it. We’re given a five-minute or so epilogue that lets us know what happened to these characters after their eventful day in the French countryside, but overall, the very short running time sort of precludes a lot else from going on.

As a fragment of what should have been a larger work, this is quite interesting. There is a sort of lyrical beauty to many of the scenes that Renoir has created. The romantic angle is quite dated from a modern perspective, though—the women here are seen essentially as a quarry for the men to hunt. Actually, that’s probably not so dated from the perspectives of many a man. But it does seem to be the opposite of progressive in a lot of ways, which may well be either a function of the time in which it was made, or a function of the time Renoir was attempting to depict.

The look of the film is lush and the filming is languid and lovely, making this film something special to look at. It’s a terrible shame that the film was never completed. At twice this length, or perhaps a bit longer, Un Partie de Campagne has the potential to be something moving and beautiful. It approaches this in places, but still feels far too limited and too rushed for something that should be told at the pace that it wants to set—slow and tranquil, something eased into instead of rushed through.

For this, it’s a disappointment, although this is not the fault of the film itself. Renoir’s fragment still holds more power and more actual romance than films three times this length being made today, and for that, it is noteworthy.

Why to watch Un Partie de Campagne: Renoir brings lyrical beauty to film.
Why not to watch: It doesn’t really go anywhere. It’s half a movie.
Posted by SJHoneywell at 9:12 PM