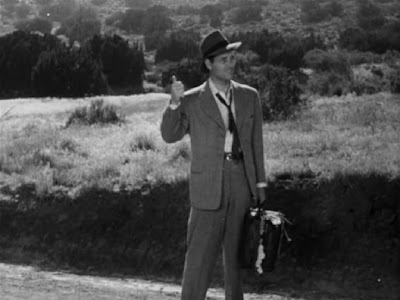 I was really excited to see Detour. I love film noir, and I’ve seen in several places that this film is considered one of the formative noirs, one that influenced basically everything that came after it. Finding it streaming was exciting—once I saw it was available, I knew what I was going to watch today. And I’m reminded that sometimes our expectations are there to prepare us for greatness, and sometimes our expectations are there because they’re better than what we expected.

Sadly, Detour is the second of these. Being told that this film is critical for the understanding of film noir led me to believe that it would be a film that I would watch and wished that I had seen years ago. Instead, I’m wondering exactly what about it makes it so damned important.

We start, as with many a noir, at the end. Our sad sack narrator, Al Roberts (Tom Neal) looks like he hasn’t slept in a couple of days. He’s got a day or two’s worth of stubble, and appears as though it’s been a few days since he’s seen a shower. A few people in a diner try to get him to talk a bit, but he’s having none of it, and he completely wigs out when a certain song is played on the jukebox. And then we enter Al’s mind and we get the story of the last few months.

Al was a piano player in a honkytonk in New York. Not a great job, but he got to work with Sue Harvey (Claudia Drake), which made life easier. The two had plans to marry, but Sue nixes them, telling Al that she’s heading out to Hollywood to try her luck. He lets her go, and after a few days or weeks, decides that he’s waited long enough and heads out for the Left Coast himself. Of course, since he’s a poor piano player, he doesn’t have money for a flight or even bus fare, so he hitches his way across the country.

It’s here that he runs into Charles Haskell, Jr. (Edmund MacDonald). It’s evident right away that Haskell is not on the level; there’s something a bit hinky about him. But, he’s got a nice car and he’s happy to take Al all the way to L.A., provided Al is willing to do a little of the driving. He discusses another hitchhiker he picked up—a woman who gave him some nice scratches down his right hand. Eventually, Al takes the wheel of the convertible, and when it starts raining, he stops to put the top up. When he does, he discovers that Charles Haskell, Jr. is now the late Charles Haskell, Jr., evidently dying of a heart attack or something nearly like.

Rather than wait around for the cops, Al steals Haskell’s wallet, money, and car, and continues west. He figures that eventually he can ditch the car and just blend into the big city. Along the way, he offers a ride to a young woman named Vera (Ann Savage). And, in one of those Dickensian coincidences that seem to happen in movies, it turns out that Vera is the hitchhiker who gave Haskell the scratches. In her mind, Al is a killer, and she’s got the drop on him, and now Al has to do whatever Vera tells him.

That’s enough plot, although it’s worth saying that the rising action contains another ridiculous coincidence, and so does the climax. It’s almost as if the writer of this film couldn’t get around the idea of the world proceeding normally, and wanted Al Roberts to be doomed by fate to a terrible existence. Al makes the wrong choices at every possible turn, and the fact that everything he’s done has just made things worse for him in every respect doesn’t change his reality of being a poor dumb clod who makes a lot of bad decisions right in a row.

And that’s one of the problems with this movie; it’s an idiot plot. If Al had reacted the way that almost anyone else would have—stay with the car and the body and allow himself to be picked up right at the start, none of this would have happened. A quick medical exam, even by 1945 standards, would have shown no foul play, and he’d be back on his way to Los Angeles. But no, he immediately acts like a criminal despite the fact that he’s never been a criminal to our knowledge and has never committed a criminal act.

And then there’s Vera. It doesn’t matter that Vera is sort of homely and has a face that looks prepared to become fat in a few years. It does matter that Vera talks like a 1930s movie gangster, complete with the patois of crime and the speed of dialogue that’s hard to keep up with. Strictly from a genre standpoint, it’s difficult to take a femme fatale seriously when she is unappealing on every level. Even the nastiest dame in a noir at least has sex appeal, but Vera brings nothing to the table. She looks like she should be dressed in an offensive t-shirt and yelling at a group of dirty, unkempt kids at Wal-Mart.

The movie turns on its ridiculous coincidences, though, and ultimately this is what does the film in. Without these repeated one-in-a-million occurrences, there is no film, and a film that requires that fate take that much of a hand is a film that needs a rewrite. This is additionally true because every character in the film is about as unappealing as Vera. Even Sue, who is supposed to be this prize that Al is trying to reach is a bit of a gold digger.

Hard to believe that a film with a running time of 67 minutes feels too long, but that’s the case with this one. What a disappointment.

Why to watch Detour: It doesn’t start noir, but it sure as hell goes there.
Why not to watch: It far too stylized to remain effective.
Posted by SJHoneywell at 6:56 PM