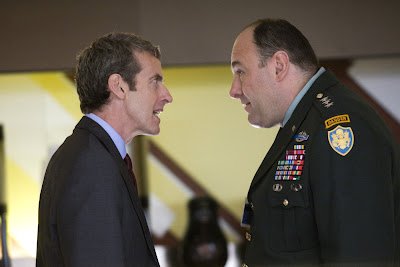 I’m going to make a generalization. Generalizations aren’t the truth, of course, and for every one that is made, exceptions to the rule cited can be found. However, generalizations usually contain a kernel of truth. So here it is—American filmmakers have lost the knack for satire. What passes for satire in American films tends to end up looking like those “______ Movie” movies (Date Movie, Epic Movie, Piece of Shit Movie, etc.), and those aren’t really satire. Fortunately, the British have never forgotten how to pull off satire, which is proven with the film In the Loop.

The film tells the story of the run-up to the Iraq War with the starting point of an off-hand comment from a mid-level British Cabinet minister named Simon Foster (Tom Hollander), who says that in his opinion, war in “unforeseeable.” This is immediately taken as an expression of pacifism and is not a part of the standard government line. The comment sends everyone into spin control mode, but the situation is made worse when, trying to cover the gaffe, Foster makes what is immediately spun as a pro-war comment. Now, both hawks and doves in America are quoting the same guy to get their point across and show international support for both war and peace.

Foster, though, is almost a sideshow in this film. The real star is Malcolm Tucker (Peter Capaldi), who is a true artist. Malcolm Tucker’s chosen medium is profanity. There is nothing so foul or perverse that he won’t say it, no nickname so degrading it won’t become a regular part of his vocabulary, and no person so high and mighty that Malcolm won’t attempt to puncture with his verbal darts. I’ll say it now: Malcolm Tucker is genius.

Anyway, it turns out that this is the first day on the job for Toby (Chris Addison) as Simon’s new handler. His girlfriend is Suzy (Olivia Poulet), who works at a different government office. With Simon’s sudden prominence both for and against the war, he’s sent off to Washington, where he will encounter a series of people who attempt to use him for their own purposes, either to start the war or prevent it. Notable are Karen Clark (Mimi Kennedy), who wants to avoid the war, Lt. Gen. George Miller (James Gandolfini), a dove-oriented career military man, and Liza Weld (Anna Chlumsky), Karen’s assistant who is worried that an anti-war paper she has published might cost her her job. On the other side of the coin is Linton Barwick (that-guy David Rasche), who is a blowhard hawk, his assistant Bob (Enzo Cilenti), and the social climbing Chad (Zach Woods), who supports whichever side he thinks will win.

Essentially, the plot goes back and forth between all of these people making power plays to get what they want. Our main characters—particularly Simon and Toby—are constantly caught in the middle trying to figure out what to do next.

Here’s what’s interesting about this film. Even beyond the near constant and endlessly creative expletives, this film is very funny. But like the best satire, it’s also incredibly disturbing. Why? Because it’s not a stretch to think that the situation and these people are based almost completely in reality, that this film is not a complete farce, but a mild exaggeration of the reality. And the reality is terrifying. The pro-war camp is stupid, arrogant, and anti-intellectual. The pro-peace camp is backstabbing, conniving, and equally arrogant. There is constant belittlement, rage, and a near permanent focus on doing everything possible to hurt everyone else possible at all times. In short, it comes off that politics, both national and international, is little more than an almost literal dick swinging contest, with wars started and stopped simply to prove they can be.

That, friends and neighbors, is scary. The fact that people like Linton Barwick actually exist and have considerable power is sobering.

That more than anything is the reason for good satire. Smart satire holds up a funhouse mirror to the world, showing us an extreme and distorted view of reality, and that view of reality is funny when it’s done well. In the Loop is achingly funny. It’s also very scary, because it appears genuinely that it’s not holding up a funhouse mirror, but a regular one. This is less satire than it is black comedy.

Simon is worth a little additional commentary, because Simon is in many ways the heart of the film. To everyone, both American and British, Simon is something of a clod. He’s a little slow, a bit naïve, and not really capable of holding his own without having his hands held. And yet, Simon is actually pretty sympathetic here because he’s completely normal. He’s out of his depth the same way almost all of us would be in the same situation. He can’t even do his job because everything he says or thinks gets twisted and bent and used for nefarious purposes. He’s a sheep among wolves, the poor dumb sap.

Why to watch In the Loop: Scathingly funny, and the most creative profanity ever filmed.
Why not to watch: If it’s an accurate portrayal of politics, we’re all doomed.
Posted by SJHoneywell at 7:53 PM