History is Not for the Timid 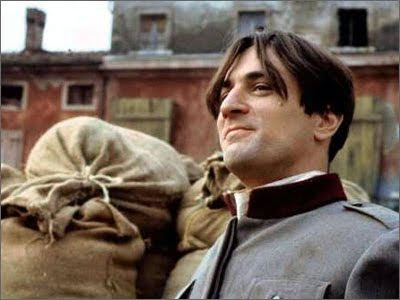 There’s a reason I’ve gotten through most of the really long films in the first half of this quest. It’s mainly because really long films can be really hard to watch. Oh, there’s still plenty of films that clock in at close the three- and four-hour marks, but to my knowledge, Bertolucci’s Novocento (1900) is the last one on The List that runs more than five. It took me several days to get through the whole thing.

I also find that the longer the film, the shorter my synopsis. So here’s the quickie version of this film. Two boys are born on the same day at the same place in Italy. One, Alfredo Berlinghieri (played as a child by Paolo Pavesi and as an adult by Robert De Niro), is born to the ruling family of the estate. The other, Olmo Dalco (played first by Roberto Maccanti, then by Gerard Depardieu), is born to the family of peasants who work the land. The two grow up together and sometime rivals and sometime friends, but are separated several times. While Alfredo’s life is money and pleasure, Olmo’s life is work and socialism. We also get World War I, the rise of fascism, and the subsequent socialist revolution after the war. And this takes something more than 300 minutes to tell.

And that’s really all there is to this. It is a warts-and-all telling though, and for Bertolucci, this means mostly warts. The life of the Berlinghieri family is essentially the sorts of problems of the wealthy we have come to associate with the movies. Alfredo has a loveless marriage and deals with the rise of fascism by essentially ignoring it completely. Olmo, on the other hand, deals with intense poverty, oppression by the fascists, and the fact that the love of his life dies in childbirth. Meanwhile, the peasants on the Berlinghieri farm are forced to deal with Attila Mellanchini (Donald Sutherland), and abusive and terrible foreman who converts early to fascism and is cruel beyond measure.

It seems that over and over what this film is about is simple human brutality. Much of this comes from the character of Attila—he bludgeons a cat to death near the middle of the film to prove a point about dealing with communists, kills a child brutally, and murders a former landowner. But the brutality and vicious sexual practices aren’t limited to him, nor strictly to the fascists. In one fairly memorable scene, Olmo and Alfredo prepare to share a prostitute, but Alfredo insists that she drink first. This triggers the woman’s epilepsy, so we get a full-blown seizure during naked time. There’s a ton of nudity in the film as well, and virtually all of it is about as unerotic as possible, to the point where it is frankly unappealing.

What I don’t understand is the length of these endless epic films. I understand the point that Bertolucci is trying to make here, but it seems very much like he could have made this point without a number of these scenes. Is it important, for instance, that we see the young Olmo and Alfredo comparing their penises? Do we need the full length of the party scene in which Alfredo’s eventual wife pretends to be blind and then proceeds to tell everyone there that she really isn’t blind? I understand that a story of this scope requires a bit of length, but a good hour or more could be sliced out of this film without much loss in terms of character or story. A lot of what happens is merely Bertolucci piling up additional evidence for things that we as an audience already understand.

It’s an interesting choice to completely skip the wars, though, and that’s a choice I appreciated. Olmo goes off to war and returns home, and this takes just a few minutes of screen time. We don’t get an endless slog of battles and fight sequences and men running out of trenches and being gunned down. Similarly, we don’t see anything of World War II. Essentially, the story that is being told here is limited to the Berlinghieri estate and what happens there rather than in Italy as a whole.

It is an interesting story, and one worth some time. But it is in many ways less an actual story and more an investigation of these two men who grew up side-by-side but also miles apart from each other. But really, this is all there is here. It’s the story of two very different lives lived at the same place and in the same timeframe against an increasingly dangerous and inhospitable backdrop. And for that, Bertolucci could have saved us all a little time and cut this down to a manageable size.

There are shorter versions of this film available, incidentally. I can’t speak to the quality or what has been cut, but I imagine that some of the more brutal sequences are not in the final version of the film, in part because this brutality is the difference between the unrated version and one more palatable to most people.

I can’t say I disliked Novocento, but I can say that I was ready for it to be done around the conclusion of the first disc, and more than ready when there was still an hour left to go.

Why to watch Novocento: A 40-year portrait of Italy through two wars.
Why not to watch: Sometimes, that 40 years feels like real time.
Posted by SJHoneywell at 10:40 PM