Insanity always makes for good fare in a movie. There’s something inherently lurid about mental illness, even though there shouldn’t be. There is a tremendous stigma attached to mental illness; people don’t like to talk about it and are often embarrassed by it. People aren’t embarrassed about heart disease or a stroke, but a little schizophrenia or schizoid personality disorder, and out come the jokes, the snickering, and the little white lies. 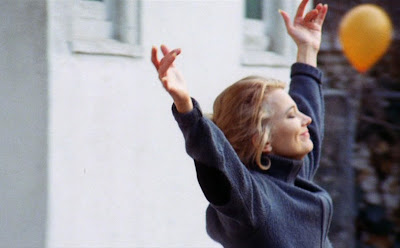 A Woman Under the Influence is John Cassavetes’s take on insanity. And it’s terrifying. In another context, the slide into insanity suffered by Mabel Longhetti (Gena Rowlands) would be comical. She is manic, talks to herself, acts inappropriately, mouths words, and is generally unnerving; in a lot of ways, she acts similarly to David Helfgott in Shine, which I watched just yesterday.

The issue is that her husband, Nick (Peter Falk), has no way to react to her bubbling insanity. He can’t control his own reactions to her and can’t control anything about what she is doing. He does love her, and loves her desperately. He just can’t figure out what he is supposed to be doing, or any way to help her. When she finally breaks down completely he has her institutionalized, and discovers that he also has no real way to relate to his own children without the buffering influence of Mabel.

Eventually, Mabel returns home, and again, no one knows how to react to her, and her return home is just as painful as her departure was. She has no coping mechanism for her world, and no one in her world has a coping mechanism for her. It’s harrowing to watch. Cassavetes does give us an emotional upturn at the end, but the path to get to that upturn is absolutely laden with emotional pain.

While there is a very large cast in this film, the only two that we are really concerned with are Mabel and Nick Longhetti. And these are incredible performances throughout. Falk is as good as he has ever been as a man torn by his deep love for his wife and his complete inability to relate to her on any level. That said, this film belongs entirely to Gena Rowlands. This is the sort of performance that is typically called “career making,” and in this case, that phrase has teeth. She shifts into various stages of mania back and forth naturally and seamlessly. It is one of the greatest film performances I have ever seen.

But, it’s really difficult to watch. It’s not an easy thing to see someone essentially self-destruct on camera, or to see the distress that this causes in everyone around her. This is not a pleasant film to get through, and with a length extending well over two hours, it is not over quickly. This is not simply in Gena Rowlands’s scenes. After she is committed to an asylum, Nick takes the kids out of school for the day and takes them to the beach. On the way home, he rides in the back of a friend’s pickup truck and feeds the kids (who are ranging in age from probably 5 to 8) a steady diet of beer to essentially knock them out and get them to sleep once they get home. It’s tragi-comic. He literally has no other way to deal with his kids because he’s never had to before.

I’m glad I watched this film, but this is another in the list that I don’t want to see again. It’s absolutely worth watching for the two performances—I could argue in fact that it should almost be considered required viewing for this reason. But it is a harrowing ride and painful to get through. Watch it once, and you’ll remember it for the rest of your life.

Why to watch A Woman Under the Influence: How many people live like this? How many would admit to it? I’m guessing the first number is high and the second is low.
Why not to watch: It is monumentally painful.
Posted by SJHoneywell at 11:44 PM