Okay, get your knives out.

I watched The Lion King with my girls. I didn’t hate it. I also didn’t love it. Please wait with the knives and let me get to the end of this. After all, the condemned does get a last word. 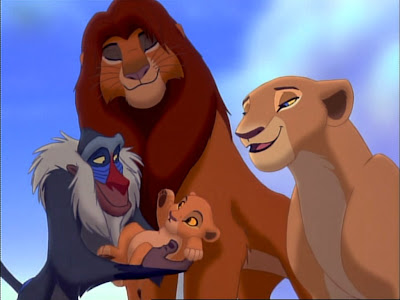 I’ll gloss the story quickly. Simba (Jonathan Taylor Thomas as a cub, Matthew Broderick as an adult) is the son of the current lion king, Mufasa (James Earl Jones). Simba gets shown off to all of the animals in the area as their eventual ruler, and all of the animals are there except Scar (Jeremy Irons), Simba’s uncle and Mufasa’s brother. Scar wants to be king, and plots to eliminate both Simba and Mufasa. He succeeds in killing off Mufasa, but Simba flees.

Simba winds up befriending a couple of jokers from the Island of Misfit Animals. Timon (Nathan Lane), a meerkat and Pumba (Ernie Sabella), a warthog, survive by eating insects and espousing a no-worries philosophy. Simba takes to this and eventually grows up, managing to become quite the buff lion despite his all-insect diet. Eventually, he is reunited with childhood sweetheart Nala (Moira Kelly) to get back at Scar and reclaim his lands. Oh, and there are hyenas.

Okay, it’s a bit more complicated than that and there are plenty of songs, including the everyone-knows-these “Circle of Life” and “Hakuna Matata.” I knew both of those songs before I’d seen this film, just like everyone.

I know that this film is formative for an entire generation. People who are 15-20 years younger than I am grew up on this movie, and it is very close and dear to them. They feel about it the way that I feel about the original Star Wars trilogy and Raiders of the Lost Ark. It’s a part of their childhood, and instantly reverts them to this place in their past. The songs are familiar and fun, the jokes still work, and it’s still horrible when Mufasa gets trampled by wildebeest. I get all that, because I have that same relationship with some movies myself.

But, and this is important, I can’t have that with The Lion King simply because I can’t. It’s a film that was built up for me to an insane degree for one thing. And while it is beautiful to look at, the story feels kind of thin. Simba runs away and then returns. There aren’t the sorts of complications or pitfalls I remember seeing in other Disney films. Frankly, it feels a bit two-dimensional to me. It also feels both slow and rushed. We don’t get the significant plot point of Mufasa’s death until nearly halfway through the film. The comic relief characters of Timon and Pumba don’t show up until after that, and they don’t do much but eat some bugs. Really, I expected Mufasa to kack it in the first 15 minutes and there’d be a lot more of Simba struggling to grow up. Instead, it happens in an instant at the end of Hakuna Matata. It’s also worth noting that in general, I dislike Disney comic relief characters intensely.

I do understand the love for this film, and like I said at the start, I didn’t hate it. It’s not a terrible movie, but it isn’t the end-all, be-all of Disney animation, either. There are plenty of Disney films I like a hell of a lot more, and that’s not even including Pixar into the mix.

Disney films have a feel to them. They follow a set trajectory. The Lion King follows that trajectory from start to finish without deviation. So, as an adult watching the film for the first time, there were no real surprises.

Finally, a caveat. While this was the first time I saw the film, I did know the story going in. I saw this performed on stage in London with a Broadway-caliber cast. And, frankly, I hated it. I may be soulless, and perhaps you’ll now get rid of your link to my page if you are a fellow blogger, but I stand by it. I didn’t like this story live, and seeing the animated film didn’t change my life in any meaningful fashion. Sorry about that, but not really.

Why to watch The Lion King: It’s a cultural touchstone for an entire generation.
Why not to watch: If you didn’t see this as a tyke, it’s probably not as good as you’d hope.
Posted by SJHoneywell at 11:08 PM