Kick 'Em When They're Down

Film: The Big Carnival (Ace in the Hole)
Format: DVD from NetFlix on big ol’ television. 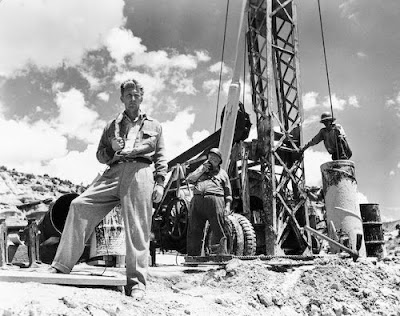 Unless you stick to one or two genres of film, after awhile, you see a little bit of everything. Over the last 22 months, I’ve reviewed more than 500 films for this site, watched more, and have 40+ years of previous movie watching experience. I’ve seen a hell of a lot of movies in my lifetime. I’ve seen good, I’ve seen bad, and I’ve seen films that make me despair for the human condition. But in all of that time, I’ve never seen a film as cynical as The Big Carnival (frequently billed as Ace in the Hole).

A lot of Billy Wilder’s films have a deep cynical streak. The Apartment, Stalag 17, Double Indemnity, and Sunset Blvd. all run cynical as well, and until the uplift at the end of The Lost Weekend, that film is as brutal to human nature as any film that came before it. But The Big Carnival tops them all for pure spite, evil, and the brutality of man against his fellow man.

Chuck Tatum (a manly guy with a manly name played by Kirk Douglas) is the greatest newspaper man in the country, at least in his own mind. But he’s offering the owner and publisher of an Albuquerque newspaper a huge discount on his services, because he’s also been fired from 11 straight newspapers for a variety of reasons including drinking, an affair with the editor’s wife, and a libel suit. The publisher, Jacob Boot (Porter Hall) hires Chuck on regardless of his reputation. Chuck is hoping for a big story, a big break, and a big ticket out of Podunk, New Mexico.

The story takes a year to show up. Out on assignment to cover a rattlesnake hunt with cub reporter/photographer Herbie Cook (Robert Arthur), Chuck stumbles onto the biggest human interest story of the year. Leo Minosa (Richard Benedict) has become trapped inside an ancient cliff dwelling, looking for native artifacts to sell at his roadside stand. Tatum crawls in to check on him, and finds the man pinned under a rockfall. Finally, the story he’s been looking for.

What happens next is the cynicism of Wilder’s script. Tatum realizes that a quick rescue will do nothing for him—the only way to get himself out of Albuquerque and back to the big time is to turn this event into a huge, nationwide story. The only way to do that is to create a media circus around the event, and that means that Minosa will have to stay trapped longer than the day or so that the contractor (Frank Jaquet) tells him shoring up the cave and digging the man out will take.

To do all this, Chuck starts enlisting support for his plan. He convinces the local sheriff (Ray Teal) to pressure the contractor to go through the top of the mountain, a process that will take a week to reach the trapped Leo. This, Tatum assures the sheriff, will virtually guarantee his constant re-election for the near future, and will make the contractor the biggest name in the state. He also convinces Leo’s wife Lorraine (Jan Sterling) to stay for the duration despite the fact that she wants nothing more than to leave Leo behind. Why stay? Because as it turns out, the sudden publicity has made her roadside restaurant/store a big hit, and she’s raking in cash hand over fist. Even the idealistic Herbie turns cynical, thinking about turning his photography into a spread for Look or Life magazine.

And so it goes. Tatum does everything he can to be the only source of information on Leo Minosa, trying to leverage the greatest human interest story in the country as a way to get out of the dead end he is in. The suffering of Leo doesn’t matter. Neither does the fact that Lorraine Minosa is a classic femme fatale, looking out only for herself, even to the point of making a play for Tatum’s affections if it will get her to New York and out of her roadside stand. Only Leo and his parents are anything like sympathetic characters here, with the possibly inclusion of Jacob Boot, who wants nothing more than to run an honest newspaper.

The ending is pure film noir, and it really is the only ending that would satisfy this story. Anything less, anything milder, anything easier on the character of Tatum as arch-cynic would shortchange everything that Wilder established through the first two acts of the film.

Is this Wilder’s best movie as well as his most cynical? Probably not. It would be difficult to say the least to surpass Double Indemnity. But make no mistake--The Big Carnival is every bit as brutal and unflinching it exposing the dark heart of many a human animal and every bit as smirkingly sardonic as any film ever made. Wilder was a master of converting any genre he got hold of into something that reflected his world view of romanticism turned cheap and vulgar. Wilder was in many ways the dark mirror reflection of Frank Capra, and this film is the ugliness hiding inside everyone.

What’s truly noteworthy is that like many films that try to peel back the surface layer and show the corruption and evil beneath, this indictment of journalism and sensationalism has only grown more relevant, save that a modern story would keep Chuck Tatum cynical through to the very last frame instead of attempting to redeem him.

Why to watch The Big Carnival: Wilder at his most cynical, Kirk Douglas at his most ruthless.
Why not to watch: It’s tame compared with modern media.
Posted by SJHoneywell at 10:04 PM