As far as I can tell, Woody Allen writes and makes films to exercise his demons. That’s not a typo, and yes, I know that it seems like I’ve used a word incorrectly. I haven’t. In the past, perhaps his writing was a way to dig out the things in his brain and try to release them, but I don’t think that’s the case, and hasn’t been for years. These days, I think Woody Allen likes to take his demons to the park like dogs on a leash. He lets them off, they run around for a bit, and when they’re tired, the calls them back, gives them a treat, and takes them home, tired and happy and he lets them curl up by the fireplace. 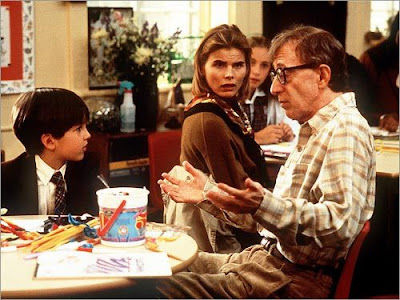 This is certainly the case with Deconstructing Harry. Allen claims that the film is actually based on the life of author Phillip Roth, and that might well be true, but if that’s the case, then his life has had a lot of similarities to Roth’s. I’ve read Roth. I’ve read the old, good stuff like Portnoy’s Complaint and I’ve read the newer, complain-y stuff about old guys with prostate problems. Roth is a good writer, but his work is autobiographical, and he’s a mess. So too is Harry Block (Woody Allen), the hero of our strange fable.

It’s not evident at first that the story is about Harry Block, though. What we learn quickly is that a lot of what we are going to see in this film is the characters in Block’s novels and short stories either as he is writing them or revisiting them. Sometimes we’ll be seeing Block and sometimes we’ll be looking at bits and pieces of his imagination, and sometimes, we’ll be looking at these things at the same time.

It’s evident that Block writes a lot from his own life. The opening scene, for instance, shows us a woman having an affair with her brother-in-law and being caught in the act by her blind grandmother, who seems to miss the sex act going on right in front of her. We then cut to Harry’s life, where he is confronted by his ex-sister-in-law about writing essentially about their affair in his latest book, and thus essentially telling his ex-wife that he was having sex with her sister during their marriage.

And then we get the details of Harry’s life, which like Roth’s and like at least the public life of Allen and many of his previous films, is concerned with his place in an uncaring universe and lots and lots of sex with anyone and everyone he can get it. Harry has a string of failed marriages, and a string of failed relationships, mostly due to his being unable to remain faithful and his long-standing love of prostitutes. We get this mostly in flashbacks of his writing, with the thinly-veiled Harry Block and the people in his life variously portrayed by Tobey Maguire, Richard Benjamin, Demi Moore, Robin Williams, Julie Kavner, Stanley Tucci, and Julia Louis-Dreyfus.

In the real world, Harry is about to be honored by the college that kicked him out years before, but he has alienated everyone in his life to the point that he has no one to go with him. His ex-wife (Kirstie Alley) won’t go and won’t let him take their son, Hilly (Eric Lloyd). His latest ex, Fay (Elizabeth Shue) is getting married to his ex-best friend Larry (Billy Crystal). His other friend Richard (Bob Balaban) is worried that he’s on death’s door due to chest pains and a family history. Harry is left with taking his latest hooker, Cookie (Hazelle Goodman); Richard, who comes along despite his health; and Hilly, who they essentially kidnap along the way. During the drive out to the college, Harry essentially hallucinates his characters, deals with Richard dying silently during the drive, and his own fragmenting psyche.

What’s interesting here is that evidently Allen has borrowed from a lot of his classic sources to make this film. I haven’t yet seen Wild Strawberries, but it’s my understanding that the plot of this film matches that one in many respects. Allen also borrows from Godard here with sudden jump cuts that are initially distracting, but soon become a part of the landscape of the film. He’s also borrowed from himself, since there are traces of Stardust Memories in here, too.

Where the film starts to fail a bit for me is in Allen himself. I have a tendency to like Woody Allen films in general. I actually don’t mind his constant kvetching or his nebbish persona (or reality). I find a lot of what he does really funny. But this is probably the last moment where he’s even remotely believable as an even somewhat romantic character, not that Harry Block is at all romantic. At some point, it simply becomes unpleasant seeing this guy chasing around women far less than half his age.

In other words, as much as I like Allen and as much as I tend to enjoy his writing and a lot of his films, I can’t help but feel that this film would have been even better and more effective with someone else in the role of Harry Block and Allen spending all of his time behind the camera instead of in front of it in virtually every scene. Still, I can forgive a little hubris, especially when it may have been caused by the same neuroses in Allen as those in the character. Woody has certainly deserved the benefit of the doubt.

Flat out, if you like Woody Allen at his best, his sharpest, and his most comically bleak, this is a movie you will not want to miss.

Why to watch Deconstructing Harry: Woody Allen being Woody Allen.
Why not to watch: Same reason—if you don’t like Woody Allen, you’ll hate this film passionately.
Posted by SJHoneywell at 5:48 PM